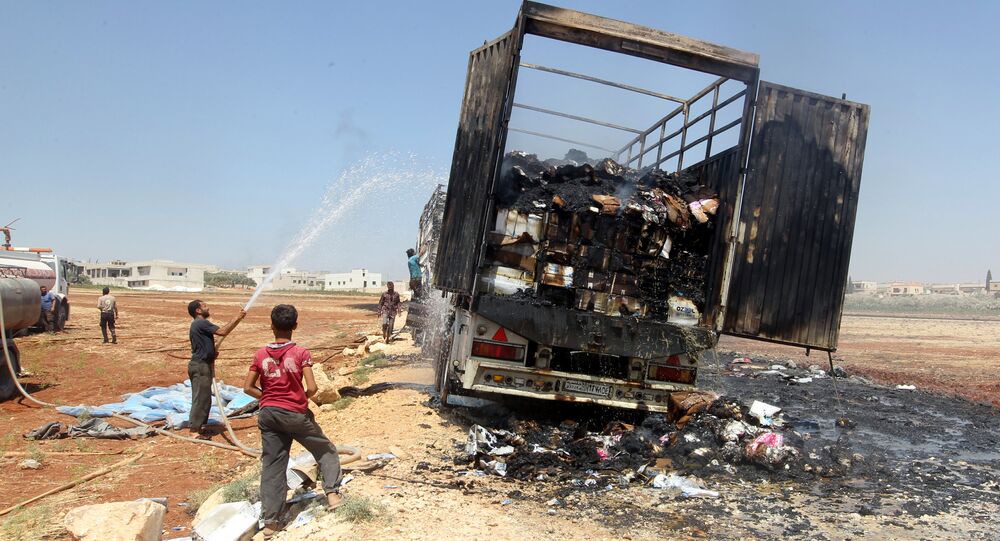 This week has witnessed the expiry of yet another red line the US had previously set for Syrian President Bashar Assad's transition out of power: August 1. Analyzing the possible reasons for the failure, US media says it was because Washington was “blindsided” in Aleppo.

© REUTERS / Ammar Abdullah
In Syria's Aleppo Russia is Saving the US' Face
Back in May, US Secretary of State John Kerry set a new deadline for Syrian President Bashar Assad's transition out of power: August 1.

“The target date for the transition is the first of August,” Kerry then told reporters.

The ultimatum was reminiscent of Kerry's warning in 2011 that Assad's days were "numbered," as well as President Barack Obama's “red line” speech in 2012 outlining the conditions that would prompt the US to take action against the embattled president.

However as yet another deadline passes without any result, the US media put forward its reasons for the failure.

“Once again, the Obama administration appears to have been blindsided by Mr. Putin, just as it was when Russia dispatched its forces to Syria in September,” writes The Washington Post with regards to the situation in the Syrian city of Aleppo.

“For more than a month, Secretary of State John F. Kerry has been pressing the regime of Vladi¬mir Putin to accept what, for Moscow, would be a sweetheart deal on Syria,” the newspaper says, explaining that the deal would “grant Russia’s long-standing request to carry out joint operations against Syrian rebels deemed to be terrorists, in exchange for another Kremlin promise to restrain bombing by the regime of Bashar al-Assad in some parts of the country.”

© AFP 2020 / GEORGE OURFALIAN
Four Reasons Why Liberation of Aleppo Would Mean an End to the Syrian War
However, it notes that Moscow only disregards such a “jawboning" of the US, without any promised consequences, be it the US “Plan B for Syria” or other actions.

A similar view is echoed by British daily The Guardian, which predicts that “another western failure looms in Aleppo.”

A failure or a manoeuvre?

In her analysis on the issue, Russian political analyst Elena Suponina however suggests that the main task for the US Secretary of State is to “back pedal” all the decisions as long as possible.

The idea is that President Obama has no intention of getting deeply involved in the Syrian crisis, she writes in her article for RIA Novosti.

© Sputnik / Andrey Stenin
Syrian-Russian 'Humanitarian Offensive' Takes US Policymakers by Surprise
“No, not because the Americans are betting on any possible agreements with Russia, they are no that naïve, it is just an excuse for the readers,” she says.

“They are already fearing Syria without Assad not less than Assad’s Syria. And thus they advocate the limited cooperation with Russia,” the political analyst suggests.

However she further notes that closer to the US presidential elections in November, the US administration might need some “loud victory” for the supporters of its Democratic nominee Hillary Clinton.

And then we could witness liberation of Iraqi Mosul of Syrian Raqqa, or a breakthrough in Geneva negotiations. But so far it still remains to be seen.