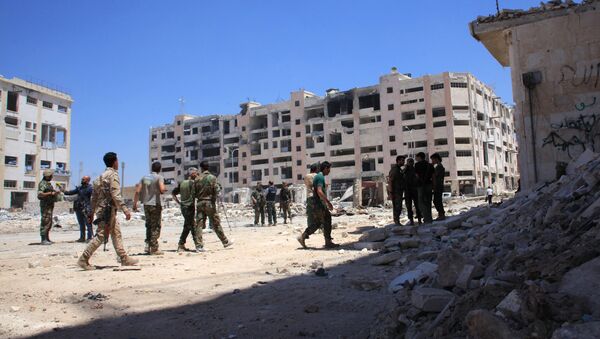 As the Syrian army advances in the jihadist-ravaged city of Aleppo, Russian political analysts explain why the once-vibrant metropolis, formerly home to 2.3 million people, is of prime importance to all the parties of the conflict and can play a key role in settlement of the ongoing crisis.

The first group of residents trapped in Aleppo's militant-occupied eastern neighborhoods has started to escape through a humanitarian corridor created with Russia’s help, according to reports broadcast by Al Mayadeen TV.

Leaflets were dropped on Thursday over the city with instructions on how to approach checkpoints and a map showing the corridors. 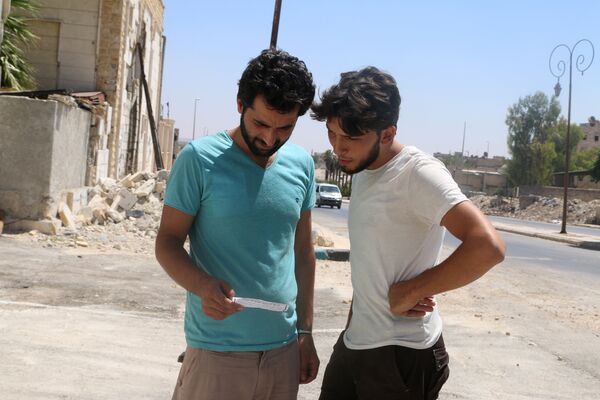 Men read one of the leaflets dropped by the Syrian army over opposition-held Aleppo districts asking residents to cooperate with the military and calling on fighters to surrender, Syria July 28, 2016
© REUTERS / Abdalrhman Ismail

Those who want to leave are supposed to wave the leaflet with their right hand raised above their head and the other hand either around their head or holding a child's hand, the leaflet reportedly says. While approaching checkpoints the residents are advised to move slowly and to follow the commands of the Syrian military.

Once near checkpoints, they will be required to turn around to demonstrate they do not have explosives on them.

Russian Defense Minister Sergei Shoigu said on Thursday that Russia and the Syrian government have jointly launched a large-scale humanitarian relief operation in Aleppo, establishing three corridors for civilians and one for militants wishing to lay down arms.

'Battle of Aleppo Would Have Been Long Over if Not for the US'
Syrian Arab News Agency (SANA) reported on Thursday that President Assad has issued a decree granting amnesty to all militants who surrender within three months. This prompted “scores of terrorists” to turn themselves in and lay down their arms.

A military source told SANA that army engineering units had dismantled the explosives and removed mines from its streets and squares, with the Syrian army establishing full control over the Efrin bus station, youth housing and all the building blocks and factories in al-Liramoun in the northern outskirts of Aleppo.

Meanwhile, Vladimir Shapovalov, the Director of the Institute of Political Science, Law and Social Development has explained to RT why Aleppo, Syria’s most important economic and geopolitical center, might become a key to fully resolving the Syrian conflict.

“Aleppo is of prime importance to all the parties of the conflict as it is Syria’s most important economic and trade center; the city lies on the crossroad of the country’s trade routes and holds a very advantageous geopolitical position,” he said.

Russia Explains to Foreign Diplomats Position on Aleppo Humanitarian Aid
“Full control over Aleppo allows one to control not only all of northern Syria but the whole territory along the border with Turkey, the district inhabited by Kurds, and the territory of northwestern Iraq,” the political analyst explained.

“Aleppo is the dominating center of this whole region. And for the Syrian government forces, for their adversaries, for Turkey, Saudi Arabia and the US it is the key to control over the whole Syrian territory and adjacent regions.”

Hence, Shapovalov said, there’s no wonder that since the very start of the military conflict in the country there has been fierce fighting for this city.

Another political scientist, head of the Center for Middle East and Central Asia Studies Semyon Bagdasarov, also explained that Aleppo is the top strategic point, the economic capital of Syria and its clean-up could be a grandiose victory for Syria and Russia.

“However the liberation of Aleppo without closure of Syrian-Turkish border crossings, first and foremost in the city of Azaz, will be a hard task,” he said.

It is essential for cooperation with the Syrian Kurds

“Azaz — is a Turkish crossing gate and a whole load of arms, ammunition and thousands of militants have got into Syria through this crossing. It must be closed and it could be dome only in alliance with the quasi-state [known as] the Federation of North Syria – Rojava, or otherwise the Syrian Kurds,” Bagdasarov explained.

Syrian Army Destroys Al-Nusra HQ, Heavy Artillery in Aleppo's Northwest (VIDEO)
The political analyst further said why the territory under the control of the Syrian Kurds will play a vital role in the recapture of Aleppo:

“There are over 2,000 NATO servicemen on this territory, including the American special forces and its engineer-sapper battalions and the Danish, UK, French and German units. There is no clear border among them and during an offensive there might be undesirable clashes.”

Vladimir Shapovalov also noted the Kurds, more than anyone else are interested in the liquidation of the jihadists and might become a key ally to President Assad.

“For the Kurds, the most important thing is the fight against the Islamist militants, which are their major adversary in establishing Kurdish autonomy,” he said.

“In such a context, the alliance with the Syrian government is of primary importance to the Kurds, as it is Assad who could ensure the security of the Kurdish areas, not only from the terrorists but from Turkish claims as well,” he added.

Semyon Bagdasarov also agreed that Aleppo is a sweet spot for Turkey, as it is the gateway to the whole north-west of Syria, including Aleppo Province.

Russia, Syria Launch Mass Humanitarian Operation in Aleppo
“Turks historically regard Aleppo as their city and think that the population of the city gravitates more towards Turkey, but it is not the case,” he said.

“Control over Aleppo would allow for the completion of the restoration of the Syrian government’s authority over most of the country, the most densely populated and the most economically developed part of the country” said Vladimir Shapovalov.

“After establishing control over Aleppo, control over the rest of Syria would only take a couple of weeks", he concluded.