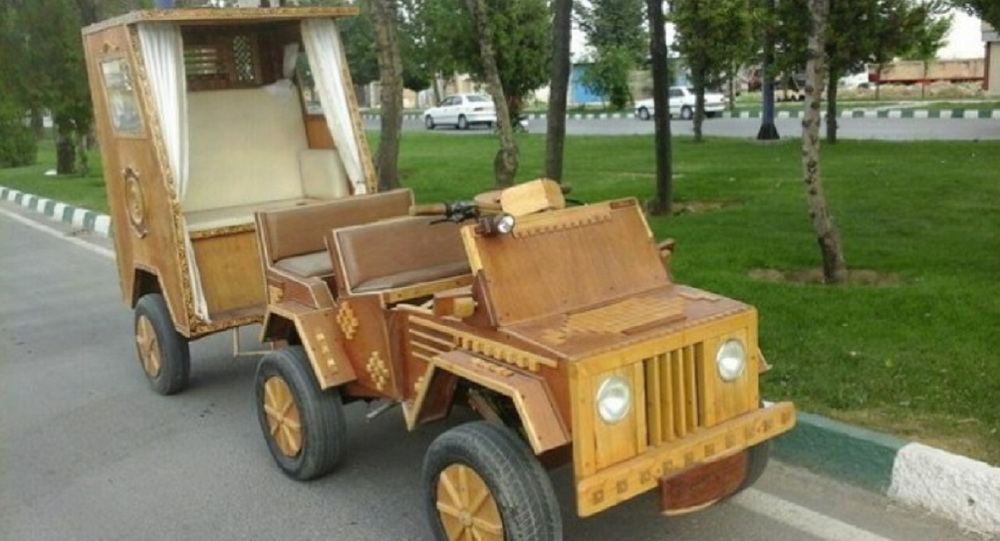 Reza Mabini Dehkordi is a poet living in Shahr-e Kord, a small town in central Iran. Handy in mechanics and carpentry, he has built two attention-grabbing cars meant for wedding ceremonies and is already leasing his inventions to his fellow townsfolk, Iran’s Mehr News reported.

“One day, as we drove down the street, I caught sight of a bizarre-looking car whose front wheels looked like the ones they used to have on old carriages. It still looked pretty modern and passersby kept turning back to take a better look,” Reza Mabini Dehkordi said.

“We entered the store this car was parked by and there was this strange-looking motorbike made of wood standing there,” Mehr News correspondent Said Mousavi wrote.

© AFP 2021 / RAVEENDRAN
Black Magic, Brains, Cars and Toilets: Odd Museums in India You Must Visit
The storeowner told us that the bike was fully functional and that there was no other such thing in the whole country. The man turned out to be a poet who had just published a 200-page collection of his poems.

Reza Mabini Dehkordi has been engaged in the woodworking business for nine years now making doors, tables and window frames in addition to the two wedding cars we mentioned before.

© Photo : mehrnews.com
A motorbike made of wood

“Most of my fellow townsfolk have already had a chance to test my cars which are very popular around here, especially during weddings,” he said.

“It’s a pity that the inventor is still waiting for financial support from the state,” Mehr News wrote.

Five of the Wackiest Cars to Hit the Road

Electric Vehicles - Cars of the Future? No, the Long-Forgotten Past!