In Turkey, not a day seems to go by without new criminal charges leveled against journalists and public figures for insulting the president. This time, the hammer has come down on renowned film and theater actor Orhan Aydin, who also serves as a columnist for the SolHaber opposition news portal.

The actor was struck with a double blow in recent days, being asked to testify for insulting the now former Prime Minister Ahmet Davutoglu. Arriving in court, Aydin learned that new proceedings have been initiated against him, this time for 'insulting the honor and dignity of President Erdogan.' 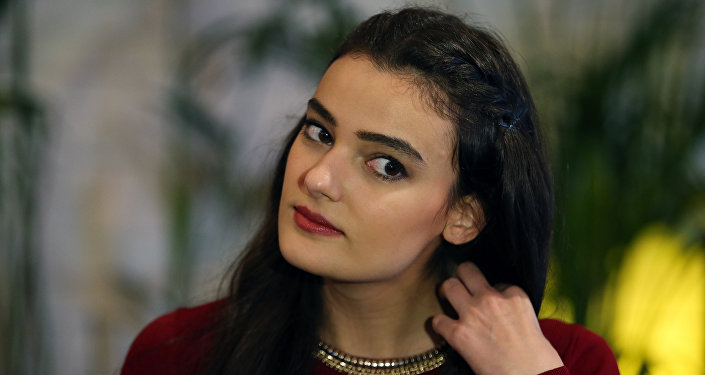 © AP Photo / Emrah Gurel, File
The Sword of Justice? Former 'Miss Turkey' Put on Probation for 'Publicly Insulting' Erdogan
In his statement for SolHaber, a popular opposition news portal, Aydin explained his predicament as follows: "the prosecutor's office investigated the articles I had written for SolHaber over the last year, chose a few phrases and sentences suitable for their goal, and based on that began a trial against me. Yes, I used the expressions 'fascist' and 'deranged dictator', and have said and will continue to say that the government has plundered the country, leaving nothing that would belong to the people, and that they are the enemies of art and artists in the 21st century. I said this and will continue to say it."

"Now," the actor noted, "the number of lawsuits filed against me, including the last two, has reached 11. But anyone who thinks that we will remain silent is very much mistaken. We will never play into the hands of a repressive dictatorship."

Asked to comment on the latest case against him by Sputnik Turkey, Aydin insisted that fear lies at the heart of Erdogan's behavior.

"Earlier," the veteran actor recalled, "the major part of my life was devoted to rehearsing in the theater, performances, participation in theater festivals. Now, I spend most of my time in courtroom corridors and the offices of prosecutors. I consider this to be a shameful situation. It's a disgrace of the 21st century."

"I think that it is no exaggeration to say that that a deliberate, large-scale operation is underway to destroy, suppress, and desecrate the values which have existed in Turkish societies over many years," Aydin added. "I think that in terms of the pressure it places on the population, the current government is no better than Hitler's Germany or Pinochet's Chile." 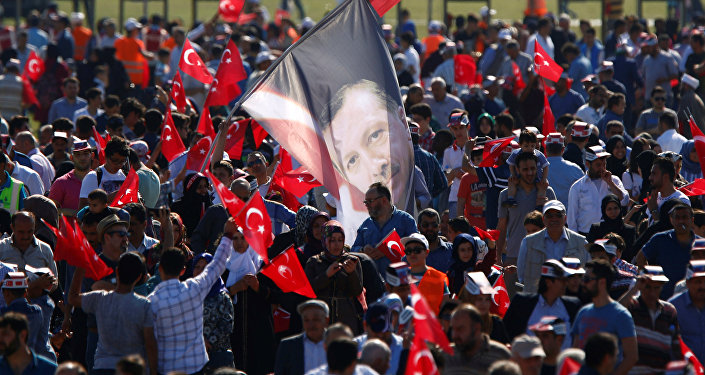 © REUTERS / Murad Sezer
Around Million Attend Anniversary Ceremony of Turkey' Conquest of Constantinople
"Events in Turkey today," the actor suggested, "are part of an operation, directed against the Turkish people by one person, who seeks to establish absolute power in the country and to declare his sultanate."

Art and culture have remained the only area of social life that the Justice and Development Party "has not been able to subjugate" in its 14 years of rule, Aydin said. In every other sphere, from state organizations and structures to the courts, have been left "without a drop of trust" among the population.

"Those judges, prosecutors, attorneys who honestly carried out their duties while protecting the freedom and independence of the judiciary of this country have been gotten rid of and broken. The lawlessness which we have seen over the last 14 years in the country is a historical crime against humanity. Yesterday, Erdogan said that 'the executive, the legislative and the judiciary are subordinate to me'. What else needs to be said? We saw a similar picture in Nazi Germany, Fascist Italy, in Chile under Pinochet; this is something that happens under all fascist dictatorships."

Aydin insisted that the proceedings against him were launched in response to his calling out of "the lawlessness, lies, thievery, crime, and the war being waged by the authorities against their own people in the southeast." 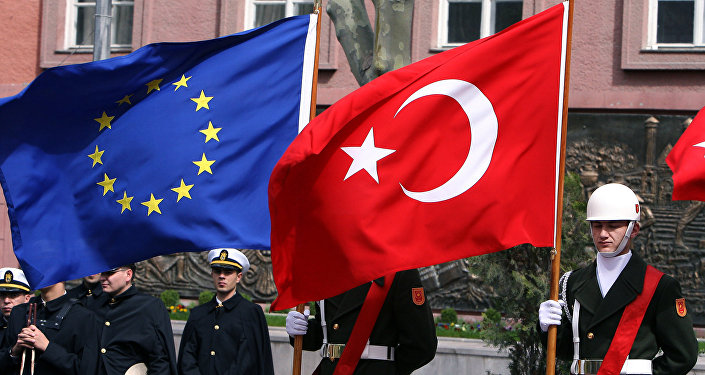 © AP Photo / Burhan Ozbilic
Turkey Made Progress on 3 of 5 Requirements on Visa-Free Regime With EU
"I wrote that the hands of the government and Recep Tayyip Erdogan personally are stained with blood thanks to the war in Syria, and backed this up by documented evidence. This is something that has been written by many other people, by foreign media. It has been discussed at the UN and in the EU. And now, the government is trying to present me as a criminal for expressing my thoughts and opinions; for the fact that I openly said that the leadership was the instigator and ringleader of the bloody war in Syria, authorities declared me a 'traitor to the motherland' and a 'parody of a cultural figure'."

Ultimately, Aydin emphasized that the government's attempt to brand everyone with an independent opinion an 'enemy of the people' is really a sign of fear.

"He [Erdogan] is afraid, very afraid. Anyone who does the kinds of things he does will fear for himself, for his power. And so the legal processes in the country will continue, but it won't help him," the actor concluded.