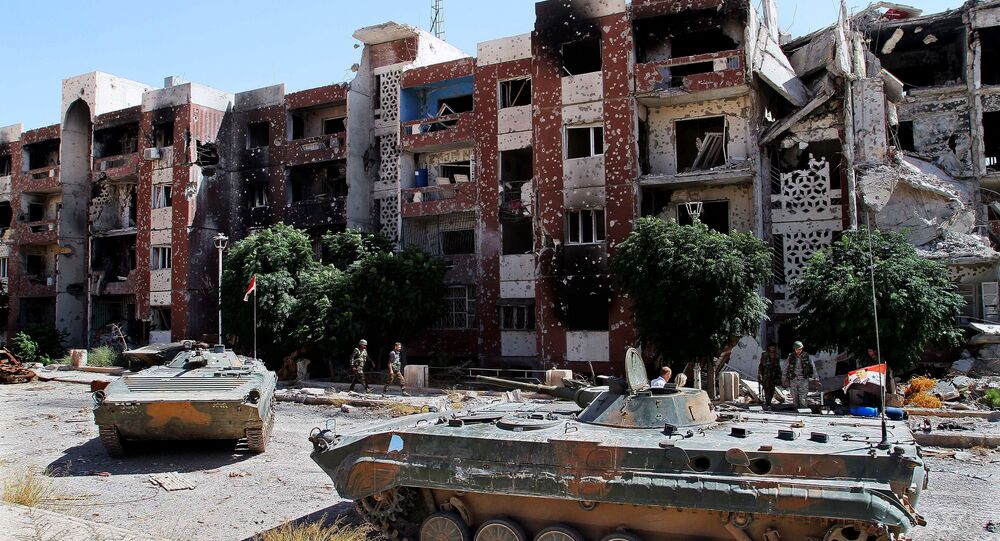 Residents of the Syrian town of Adra, seized by militants from the Nusra Front and Jaish al-Islam in 2013, were subject to jihadist terror for over three years before being liberated earlier this year. A young man who had been held at the town's Jaish al-Islam-controlled prison gave Sputnik exclusive details on the inhumane conditions there.

The man, a resident of Adra who wants to remain anonymous, sat down with the news agency's Arabic affiliate. He recalled that the whole ordeal began when he woke up one morning, not knowing that armed Islamist militants had entered his town. Getting a call from his neighbor, he looked out his window, and saw a group of bearded men in strange clothes.

"We were taken to the at-Tawba prison in Duma," he recalled. "As soon as we arrived, each prisoner was given a serial number. And then we were taken to work – we dug trenches and underground tunnels."

© Photo : Miguel Fernández
My Year in Syria: Cuban Journalist Gives Sputnik Exclusive Interview
The terrorists took over 1,200 people prisoner, including women and children. Each prisoner was organized for slave labor: men dug tunnels, women sewed and mended clothing, and the children were forced to wash floors and dishes.

Prisoners, the young man recalled, were not given the necessary sustenance, and were only allowed to use the toilet twice a day, once in the morning and in the evening. "We were fed once a day. The food was rotten – it was impossible to eat it. They gave us whatever they wouldn't eat themselves. From hunger we ate everything. We wanted to stay alive — to wake up the next morning…" the former prisoner said.

Torture was applied even against women. According to the eyewitness, the rebels took the women into a makeshift torture room, and from there prisoners throughout the prison could hear screams.

"I tried to escape several times, but nothing worked," the prisoner noted. "Finally, I managed to escape, in the dead of night. I ran to the side controlled by Syrian forces."

© Sputnik / HİKMET DURGUN
EXCLUSIVE: Daesh Terrorists Secretly Treated at Turkish Hospital (PHOTOS)
Syrian government troops liberated Adra in late March. Like other cities throughout Syria, much of the city became deserted during the war, its prewar population of 20,000 shrinking to 500 people; since the town's liberation, residents have been returning to their homes. The town's access to electricity and clean drinking water, as well as a telephone connection, has been restored. The Russian military has since delivered several metric tons-worth of aid to the area.

On May 11, the United States, Britain, France and Ukraine rejected a Russian initiative in the United Nations Security Council to classify the Jaish al-Islam and Ahrar al-Sham militant groups as terrorist organizations.