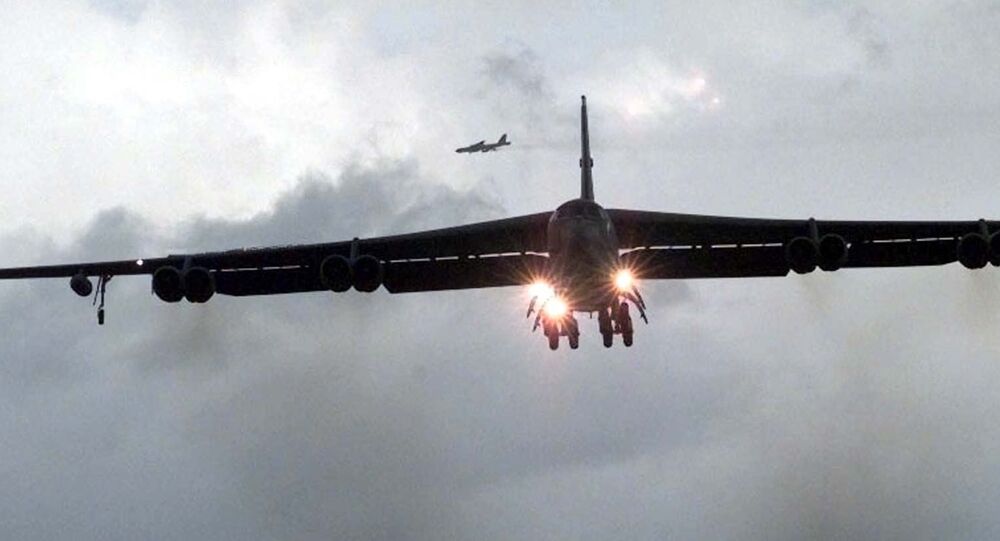 For the first time in the past 25 years, the US has deployed its B-52 Stratofortress strategic bombers to the Middle East.

Aircraft capable of carrying a nuclear payload arrived at an airbase in Qatar to join the international coalition’s fight against Daesh in Syria, the US Air Forces Central Command Public Affairs announced last week.

"The B-52 will provide the coalition continued precision and deliver desired airpower effects. As a multi-role platform, the B-52 offers diverse capabilities including delivery of precision weapons and the flexibility and endurance needed to support the combatant commanders’ priorities and strengthen the coalition team," Commander of US Air Forces Central Command and Combined Forces Air Component Lt. Gen. Charles Q. Brown Jr. was quoted as saying in a statement.

© AFP 2021 / EPA PHOTO/PA/TIM OCKENDEN
US Deploys Strategic B-52 Bombers in Qatar to Combat Daesh
Earlier, B-52 bombers were engaged during the war in Afghanistan in 2006 as well as military exercises in Jordan in 2015.

In early-March, US military sources predicted that B-52s would replace the squadron of B-1 Lancer bombers which have dropped bombs on Daesh targets since February.

Earlier, it was reported that despite the fact that B-1 bombers were used only in seven percent of sorties against Daesh, they had dropped nearly 40 percent of the bombs.

"As a multi-role platform, the B-52 offers diverse capabilities including delivery of precision weapons and the flexibility and endurance needed to support the combatant commander’s priorities and strengthen the Coalition team," Lt. Gen. Charles Q. Brown Jr., Commander of US Air Force Central Command, was quoted as saying by Stars and Stripes.

The B-52 is a multirole long-range strategic missile-carrying bomber. The aircraft was developed by Boeing and has been in service with the US Air Force since 1955. At subsonic speeds at an altitude of up to 15 km the B-52 can carry different types of munitions, including nuclear weapons.
Despite its long combat carrier, it will remain the main strategic bomber with the USAF until 2040.

© Photo : Ministry of defence of the Russian Federation
Supersonic 'ISIL Killer': Russia's Tu-22M3 on a Mission to Wipe Out Terrorist Targets in Syria
Long-range strategic bombers were used against Daesh during the Russian air campaign in Syria. Russia engaged Tu-160 White Swan nuclear missile-carrying bombers alongside Tu-22M3 long-range bombers in the operation.

The deployment of US long-range missile-carrying bombers may be aimed not only against Daesh, Vladimir Sotnikov, a fellow at the Institute of Oriental Studies of the Russian Academy of Sciences, told Gazeta.ru.

This may also serve a signal to Russia because those bombers can easily reach the Russian borders from their deployment facility, he explained.
Alongside with the Russian Tu-95 Bear, the B-52 is the record-holder in flight distance among combat aircraft.

He assumed that the US would deploy two or three B-52 bombers to the region.

"There is the point where American and Russian interests collide. Washington will continue to pursue its national interest in the Middle East, including building up its military presence in the Middle East. It is a strategic region, rich with natural resources," Sotnikov said.

Despite the current volatility in the global oil market, the US does not want to use their oil reserves, this is why it is important for Washington to keep the Middle East under control, the expert suggested.

Sotnikov also said that the US was watching closely the Russian air campaign in Syria, including the use of strategic bombers and cruise missiles.