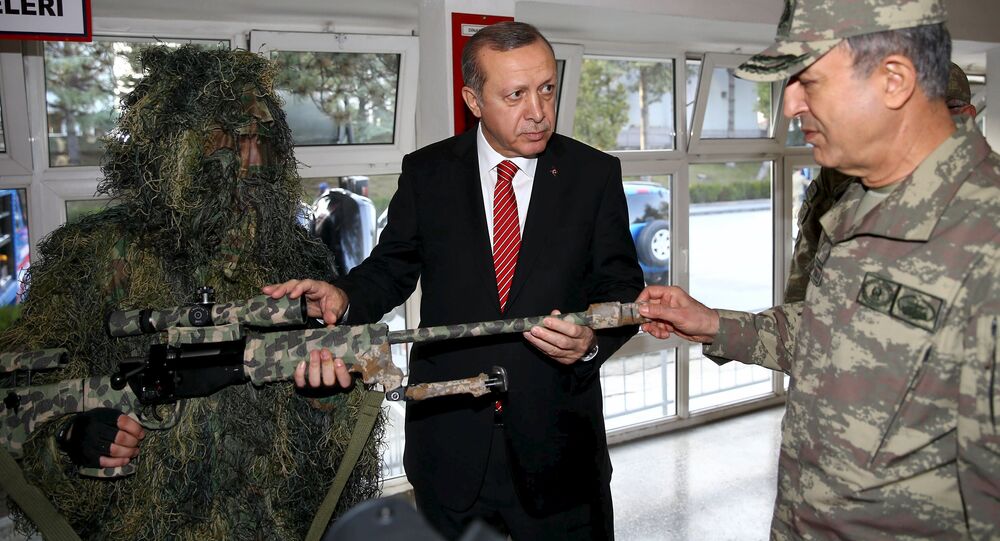 Turkey’s call for a ground operation in Syria is “steering the country toward disaster”, as most analysts agree that in the event of direct intervention, Ankara will be left without NATO support.

© AFP 2020 / ARIS MESSINIS
‘US Will Regret Its Support of the Syrian Kurds, but It Will Be Too Late’
His comments come in the wake of Turkey's recent campaign of heavily bombarding the Kurdish YPG,  the military wing of the Syrian Kurdish Democratic Union Party (PYD), across the border.

Ozturk Yilmaz served as the Consul General of Turkey to Mosul and was taken hostage in June 2015 and held for 101 days along with 48 other diplomats after Daesh militants took over the city.

He recently released a written press statement where he said that the ruling Justice and Development Party was still chasing its dream of leadership in the Middle East and accused the government of a lack of foresight, which is doing irreparable harm to Turkey’s security interests.

Retired Ambassador Ali Tuygan, who served as Turkish Foreign Ministry undersecretary during 2006-09, believes that Ankara's latest move is a continuation of mistakes it had made in Syria from the start, according to Al Monitor, a Washington-based website, which provides analysis from and about the Middle East.

© AP Photo / Halit Onur Sandal
NATO Refuses to Comment on Turkey YPG Shelling, Denies Involvement in Syria
“It will be difficult to secure results in this way,” the website quotes him as saying.

“It was also wrong to let relations with Russia deteriorate in this way,” he added, noting that a major risk for Turkey is a confrontation with Russia over Syria.

“Ankara should work to de-escalate the tension with Russia, but we see Davutoglu doing the opposite in Kiev, of all places,” said Tuygan, referring to prime minister’s remarks on Russia’s air campaign in Syria during his February 15 visit to Ukraine.

The politician also noted that Turkey had worked hard for 25 years to bring ties with Russia to a positive and mutually beneficial level.

Recently, the Turkish government additionally called on the members of the US-led anti-terrorist coalition to send ground troops into Syria.

Al Monitor, however, said that most analysts agree that in the event of such a direct intervention, Turkey would have to fight not just the YPG, but also Russian-backed government forces, without support from NATO.

© AFP 2020 / BULENT KILIC
US Must 'Get Tough' With Turkey After Shelling in Syria - Former US Commander in Iraq
German news service Tagesschau has also commented on the issue, calling Turkey’s policy in Syrian a disaster from the very start.

The outlet has called Erdogan’s foreign policy a chain of failures, which had started long before its confrontation with Moscow.

However, it said, the Turkish president seems to know how to make the situation even worse. During a short span of time he has acquired lots of enemies in the Middle East and his aggressive foreign policy seems to have reached its peak.

The UK Independent also commented on Turkey's saber-rattling at the Syrian border.

“There is the temptation to double down on his losses, but if Erdogan does, he will bring Turkey down with him,” it stated in its analytical piece on the development in Syria.