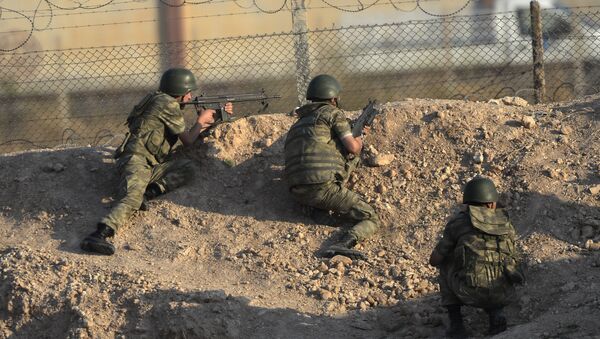 WASHINGTON (Sputnik), Leandra Bernstein — On Tuesday, Turkey continued its fourth straight day of shelling Kurdish YPG positions across the Turkish-Syrian border. The United States has condemned the attacks on the YPG, which have been important allies in the fight against Daesh.

"We have not been tough with them [the Turks]. We say we are, but we have not," Barbero stated on Tuesday.

Barbero added that the United States have failed to confront Turkey’s behavior "because we want this coalition [the Daesh] more than we want to be tough with certain members of it."

The United States "should have gotten tough" with the Turks a few years ago, Barbero argued.

At that time, Turkey had allegedly joined the US-led coalition against Daesh, but it "started pounding the Kurdish YPG," and denied the United States use of a strategic airbase in southern Turkey until last July, he added.

Barbero, who served three tours in Iraq and acted as Deputy Chief of Staff for Multi-National Task Force during the 2007 through 2008 troop surge, noted that the Kurds he is in contact with are "very frustrated with how we have given the Turks a free rein."

The ongoing Turkish attacks on YPG units come only days before the scheduled pause in hostilities in Syria, negotiated by the International Syria Support Group.