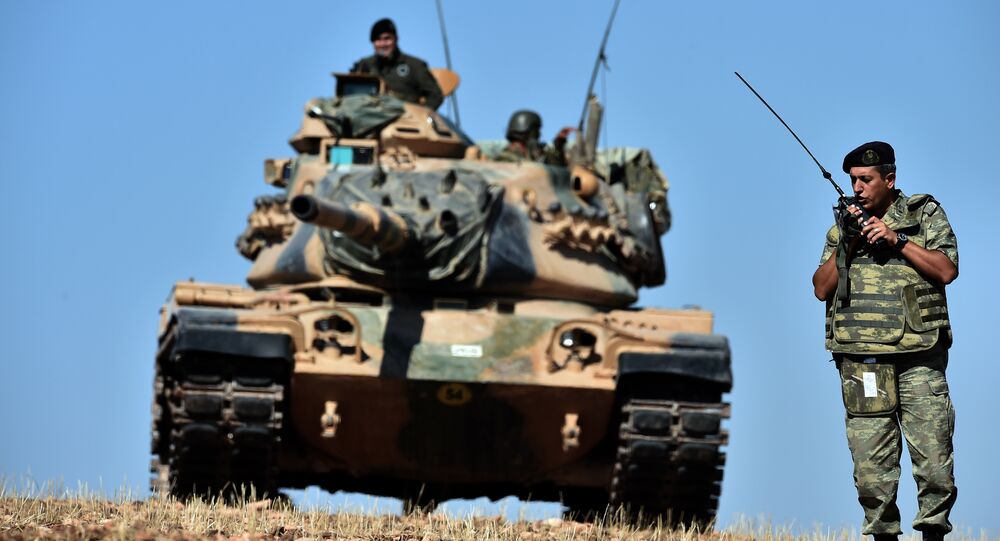 Recently, officials and military commanders have announced plans of a Turkish and Saudi invasion to fight terrorists or topple President Bashar Assad. There are several possible scenarios for a foreign ground operation in Syria.

© AFP 2021 / RAMZI HAUDAR
Egyptian General: Boots on the Ground in Syria Could Turn Into 'Media Show'
Recently, several loud statements have been made, including about Turkish troops allegedly crossing the Syrian border, but all of them were later denied. Turkey, Saudi Arabia, the US and Russia have insisted they have no plans for a ground operation in Syria.

Saudi general Ahmed al-Assiri said Riyadh was going to launch an operation against Daesh militants in Syria, as part of the US-led coalition, following the similar statement by the UAE. In addition, Saudi Arabia said it would send its special forces to Syria. Recently, the kingdom deployed its fighter jets  to the Incirlik air base in Turkey.

Moreover, in January US Defense Secretary Ashton Carter said the Pentagon would soon send ground forces to Syria and Iraq to fight Daesh.

© AP Photo / Halit Onur Sandal
Turkey to Continue Attacks on Kurdish Fighter Positions in Syria - Erdogan
However, Turkey’s actions have recently been in the limelight. Ankara has repeatedly said it will not invade Syria, but tensions have been growing along the Syrian-Turkish border.

Currently, Turkey is facing two main problems in northern Syria. First, large parts along the border – from Idlib province to the east — are controlled by Kurdish militia forces. Second, Kurds and the Syrian Army are now advancing on Aleppo, controlled by Turkey-sponsored militants. Recently, Syrian government forces cut off supply lines from Turkey. As a result, Turkey’s capabilities to interfere in the Syrian crisis have significantly decreased.

If Kurds are able to form a more or less stable Kurdish belt along the Turkish border this will have far-reaching consequences, in terms of turning Kurdistan into a state-like political formation.

Turkey is the most likely to launch a ground offensive in Syria, Evgeniy Satanovskiy, head of the Institute for Middle Eastern Studies, told Gazeta.Ru.

According to him, Turkish President Recep Tayyip Erdogan planned to topple Assad and destroy Syria in its current form, siding with Daesh militants.

© Flickr / Kurdishstruggle
Syria's Hidden Conflict: Turkey's All-Out Offensive Against the Kurds
Thus, if Daesh is defeated and Assad stays in power Erdogan will lose, he explained. Such a failure may even cost him power.

Turkey may launch a small military operation north of Aleppo, Anatoly Tsyganok, an analyst at the Academy of Military Sciences, said. The purpose of the operation may be establishing control in a previously declared "safe zone."

"They [the Turks] want to save the so-called 'safe-zone' Ankara has long been insisting on. They want to support Syrian Turkmen living in the region alongside Kurds. However, only 30 percent of them are pro-Turkish," the analyst said.

Stanislav Ivanov, an expert on international security at the Russian Academy of Sciences, said that a ground operation in Syria would be a serious problem for Ankara.

"If they cross the border their actions will not be legal. And Ankara will have to explain its actions not only to Damascus and Moscow but also to Washington and Brussels. Such an operation is legitimate only when approved by the US Security Council or NATO, but both scenarios are unrealistic," Ivanov pointed out.

"A Turkish boots-on-the-ground operation in Syria would be the end of Erdogan’s regime. He won’t go that far," the expert added.

© Photo : Russian Defence Ministry
'Shadow CIA' Warns Russian Air Power Would Stop Any Foreign Invasion of Syria
One of the possible scenarios for a Turkish invasion in Syria might be like this. Turkish forces supported by Syrian militants would seize the buffer zone at the Syrian-Turkish border, advancing inland for 25-30 km. Such a move would create a "window" in the Turkish-Syria border with access to areas controlled by Turkish-backed militants as well as Daesh-seized areas to smuggle oil. If successful, such an operation would help Ankara achieve two goals: to divide Kurdish forces in northern Syria and maintain support for Turkish-backed militants in the area.

However, experts noted, Turkey is unlikely to go through with this plan, taking into account the successes of Russia’s areal campaign in Syria, particularly in Aleppo. What is more, the reactions from Washington and other NATO allies shows the alliance is not interested in supporting Erdogan’s war-mongering initiatives which risks provoking an open conflict with Russia.

As for Saudi Arabia, analysts underscored, it could be a Turkish ally in the possible invasion of Syria, but its involvement would be highly limited in scope and personnel.

Riyadh is unlikely to gain any major success in Syria, analyst Vladimir Evseyev from the Institute of CIS Countries told Gazeta.Ru. According to him, the kingdom may send military instructors and special forces to Syria, in a bid to strengthen its positions in the Middle East.

"Riyadh’s perspectives in Syria are vague. If Saudi Arabia is involved in such an operation it would risk losing the rest of its influence on Syria," he concluded.

As for NATO, Russia or Iran, analysts agreed, that an invasion by them is unlikely. Nevertheless, they will continue their indirect involvement in the Syrian crisis.