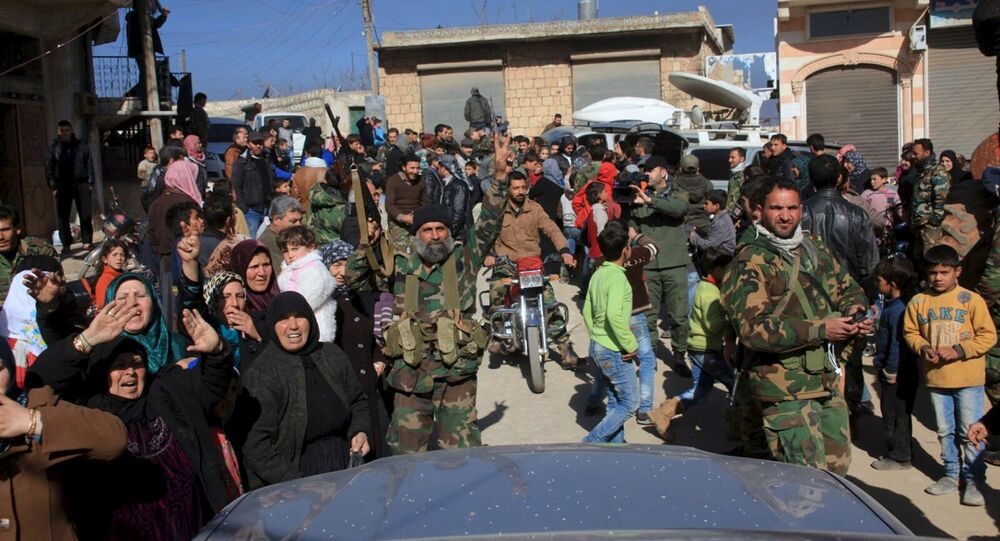 Commenting on the situation in Syria's Aleppo, veteran French journalist and geopolitical analyst Jean-Michel Vernochet says that it took Russia's air operation in the conflict for the duplicity of the Western-Arab coalition against Daesh to come to light.

In an op-ed analysis for the independent French news and analysis website Boulevard Voltaire, Vernochet commented on the Syrian Army's efforts to liberate Aleppo, Syria's second city, slamming European and American media and officials for what he said was a highly 'duplicitous' position.

"On February 1," the journalist recalled, the Syrian Army, with the support of Russian aviation, launched a large-scale operation to liberate Aleppo, the former economic capital of Syria," a part of which "has been in the hands of the rebellion since 2012."

"As always, the media began effusively writing about the crowds of people fleeing from the fighting and the advance of government forces. The only thing missing in the picture being painted were the images of the residents of the city's Western neighborhoods, who welcomed the government troops as liberators."

"Residents of a Shiite city outside Aleppo showing people jubilantly greeting Assad's soldiers. People are tired of the war."

But "the truth," Vernochet noted, "is far more prosaic, because if the city of Aleppo is completely surrounded by government forces, the rebel supply corridor with Turkey will be cut. Specifically, [it is about] two roads, between Mayer-Azaz and Andan-Aleppo, through which the Salafist- Wahhabists receive reinforcements, weapons, and ammunition from the Turkish deep state."

"Suffice it to say that the rebellion now runs the risk of total collapse, and in the immediate future, especially after February 4, when the Syrian Army broke the encirclement of two small Shiite cities –Nubl and Zahraa, surrounded by the Islamists since 2012, with residents meeting loyalist soldiers with showers of rice and flowers. This also means that up to 5,000 Shia militia may be ready to join the siege of Allepo."

Celebrations in Zahraa & Nubl, #Aleppo, after SAA & allies broke the 3 and a half year long rebel siege on the towns pic.twitter.com/YHzTtkbIxb

"It's worth noting," the journalist comments, "that it took the Russian intervention in the war to finally shed light on the duplicity of the Western-Arab anti-Daesh coalition."

© Sputnik / Iliya Pitalev
Militants' Imminent Defeat in Aleppo Leaves US Scrambling to Derail Syrian-Russian Juggernaut
"On the one hand, Western governments are crying crocodile tears about [refugee] shipwrecks in the Aegean Sea, while at the same time opening the doors of Europe to migrants, 60% of whom, a Frontex report says, have no grounds to seek asylum."

"On the other, they close their eyes to Ankara's double game in Syria on the side of the 'moderate terrorists', in the words of Mr. Kerry."

Aleppo isn't being besieged by Syria's army, it's being liberated from terrorists
Oct 2011, pro-govt rally in Aleppo pic.twitter.com/jMnYwgr9i9

"In the final analysis," Vernochet remarks, "the government offensive and the predictable debacle for the rebels marks a serious setback for Turkey, which today is cynically refusing to open its borders for those fleeing Aleppo. This position may be connected to Sultan Erdogan's grand dream of establishing a buffer zone on Syrian territory, where the refugees will be confined."

Such a buffer zone, the journalist says, "would mean Turkish forces on Syrian territory and the creation of a no-fly zone. From there, under NATO cover, Turkey would be able to carry out a ruthless war against the irredentist Kurds in the PKK."

"Suffice it to say that this would be a challenge for Russia, whose presence and action in Syria is perfectly legitimate under international law (Moscow intervened following an official request from Damascus)."

© AFP 2020 / SANA
The Aleppo Pocket: Turkey Running Out of Time for Its Plans to Invade Syria
"In this way," Vernochet writes, "the refugees become a powerful instrument with which to blackmail NATO and the European Union (not counting the €3 billion euros committed to Ankara) to give a green light for a ground operation involving Saudi special forces."

Ultimately, he warns, it remains unclear how NATO might respond if, in the hypothetical event of a Turkish invasion of Syria, the Syrian Army, supported by Russian aviation, were to stop Ankara's offensive, and then to counterattack onto Turkish territory.