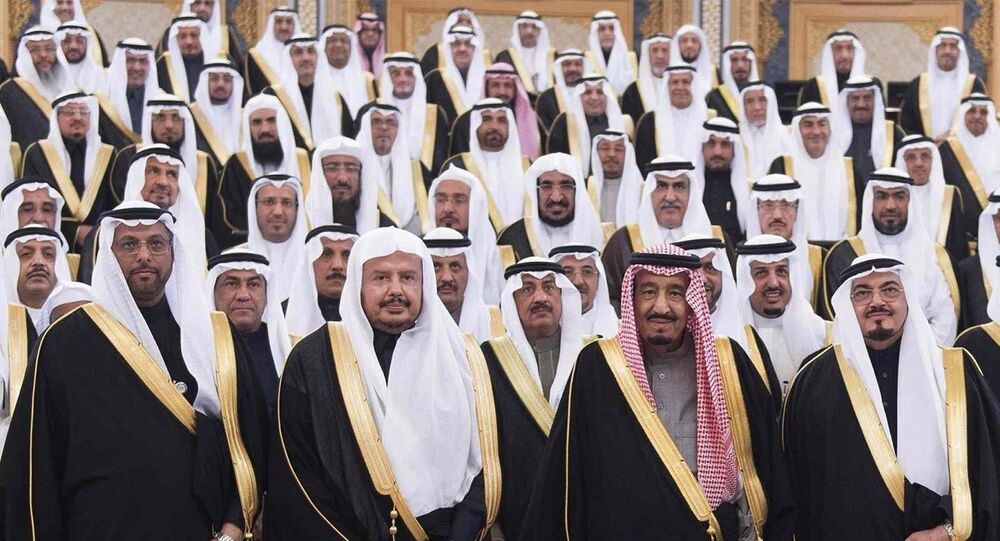 With Daesh's self-proclaimed Islamic caliphate slowly crumbling under the pressure of attacks from all sides in Syria and Iraq, the terrorist group may eventually call it quits in Mesopotamia and the Levant and move on to attack the Saudi monarchy, warns geopolitical analyst Schuyler Moore.

© REUTERS / Stringer
Islamic State Coming to the End of the Road
In her analysis, originally published by international affairs journal The Bridge, Moore, a Washington-based defense analyst, notes that as the international anti-Daesh (ISIL/ISIS) war effort ramps up, the self-proclaimed caliphate's decline is inevitable. "Its decline may take years or even decades, but it will ultimately decline."

"But although ISIS may deplete its resources and feel increasing pressure from the international community, its members will not simply disappear as the group loses momentum," the analyst warns.

The terrorist organization, Moore recalls, "is largely comprised of foreign fighters with limited ties to the countries they fight in, and in the event of a relocation, one country in particular looks like a promising alternative – Saudi Arabia."

"With internal unrest, the threat of oil-driven economic instability and a history of conflict with its neighbors, the House of Saud is ripe for insurgency and would be the ideal next location for jihadists looking for a new rallying point." Thus, "as ISIS loses steam and is pushed out of its old stomping grounds, Saudi Arabia is in danger of becoming the next ground zero for terrorism in the region."

Moore breaks down her analysis into three parts. These include 'internal risk factors', the Kingdom's 'history of radical Islamist insurgency', and 'external pressure'.

Internally, the analyst writes, Saudi Arabia faces "unique demographic and socio-economic challenges" including an immigrant community which makes up nearly a third of the country's population of 28 million and over three-quarters of the labor force. Moreover, about 70% of the population is under 30, with nearly 30% of the country's youth unemployed.

© AFP 2020 / YURI GRIPAS
With Friends Like Saudi Arabia, US Doesn't Need 'Enemies' Like Iran
"Nationals and non-nationals alike live under Sharia law with strict Wahhabi principles dictated by the royal family and the religious leaders of the ulmea [Saudi religious scholars], which often cause[s] strains within the immigrant population as well as the native population."

Meanwhile, ultra-conservative religious leaders' resistance to calls for the Kingdom's reform and modernization, together with uncertainties caused by the hidden nature of intra-royal family politics, causes friction and adds layers of uncertainty which, Moore suggests, "open[s] the door for terrorist groups who might take advantage of the instability."

The collapse of global oil prices only adds fuel to the fire of internal instability, the analyst notes. "With 80% of its budget revenues coming from oil production, Saudi Arabia has been massively affected by dropping oil prices, running some of its highest deficits in history."

Ultimately, Moore notes, the oil crisis is but another factor in "a growing list of uncertainties plaguing the country," uncertainties which "not only encourage terrorist organizations to view Saudi Arabia as prime real estate, but also create an environment in which the young, unemployed Saudi citizens themselves might fuel the fire of insurgency."

A History of (Islamist) Violence

Looking back at the history of Islamist insurgency against the House of Saud and its allies, the analyst recalls that in modern times, this history goes back to 1990, when Riyadh allowed the US to station permanent military bases on Saudi territory.

© REUTERS / Faisal Al Nasser/Files
Heading for Catastrophe? What May Force Riyadh to Unleash War Against Iran
Since then, the Kingdom "has faced an increasingly radical conservative Wahhabi faction that has objected to any sort of friendly relations with the Western world…That radical base has been responsible for the majority of terrorist attacks within the kingdom."

Moreover, recalling Riyadh's strategy of actively encouraging "youth to go abroad to support its Muslim brothers, whether in Iraq, Afghanistan or Chechnya," Moore notes that "the Saudi government has seen this strategy backfire when Saudi fighters returned home and conducted attacks at home using the skills they acquired while fighting abroad."

Unfortunately, she suggests, Saudi Arabia's counterterrorism measures, including the policy making fighting abroad a crime, "maybe be too little too late."

"Saudi Arabia is currently one of the largest sources of foreign fighters in Iraq and Syria, with upwards of 2,000 Saudi nationals joining ISIS, and is home to the largest number of pro-ISIS Twitter users in the world. The recent crack-down on foreign fighters is likely a response to fears that these jihadists will similarly return home and bring the fight to Saudi Arabia's doorstep, as has happened in the past, and an implicit recognition that Saudi Arabia may very well become the new hub for terrorism."

In addition to internal pressures, Moore points out that the threat of terrorism against the Kingdom has grown as a result of its disastrous foreign policy.

© AP Photo / Khalid Mohammed
'Domino Effect': Iran’s Revolutionary Guard Warns of Saudi Collapse
"Saudi Arabia's involvement in Yemen is steadily draining resources and political good will. The Iranian nuclear deal was perceived as a loss and a sign of weakness for Saudi Arabia and the Sunni community, which has always fought to contain its Shia neighbor. ISIS has already targeted Saudi Arabia for its ties to the United States, and in response the government has been driven to arrest almost one hundred people in 2015 alone for suspected ties to [the terrorist group]."

In the final analysis, Moore warns, domestic instability and discontent, falling oil prices, the Kingdom's ties to the West (which provokes outrage among radicals), and a government stretching itself thin via futile adventurism in Yemen and Syria, threatens to make Saudi Arabia an ideal Daesh target.