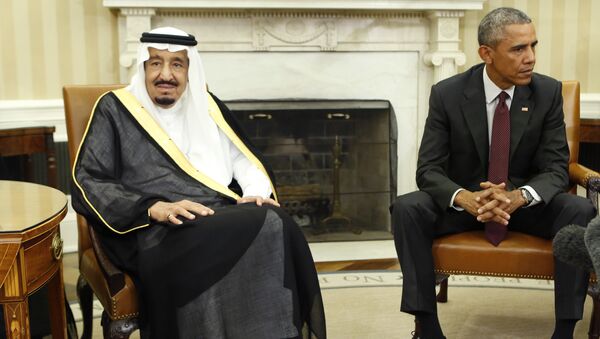 © AFP 2021 / YURI GRIPAS
Subscribe
Saudi Arabia's execution of a prominent Shia cleric last week, almost certainly designed to provoke a response from Iran, indicates a growing desperation among the Saudis to demonize Tehran, as the House of Saud's grip on both its own people and the region comes under threat, historian Saeed Khan suggests.

The simmering conflict between Saudi Arabia and Iran exploded into a dangerous back-and-forth game of one-upmanship last week, after Riyadh decided to go ahead with the execution of prominent Shiite cleric and vocal political activist Nimr al-Nimr.

Iranian President Vows to Punish Saudi Embassy Attackers
Riyadh's move sparked outrage among Shiites around the world, especially in Iran, where Shia Islam predominates. The explosion of anger resulted in protesters in Tehran storming the Saudi Embassy and setting it on fire, leading Riyadh to sever all diplomatic ties with Iran, and Bahrain, Kuwait, Qatar, the UAE, Sudan and Djibouti soon following suit, recalling their ambassadors. The diplomatic row escalated despite Iranian President Hassan Rouhani's attempts to calm the situation by vowing that the Embassy attackers would be found and prosecuted.

Late last week, Tehran accused Riyadh of further escalating the conflict, following reports that the Iranian Embassy in the Yemeni capital of Sanaa (presently being bombed by a Saudi-led coalition looking to restore its puppet government) had been struck by Saudi Air Force planes, resulting in damage to the compound and the injury of an embassy guard.

Commenting on the situation in a recent article for the US business publication Quartz, Saeed Khan, a historian and lecturer at Michigan's Wayne State University, suggests that Riyadh's decision to execute al-Nimr was a deliberate strategy, one intended to provoke Tehran militarily, and based on the Saudis' growing desperation at home and abroad.

"Each act of incitement," Khan writes, "including Saudi Arabia's allegedly deliberate targeting of the Iranian Embassy in Sanaa, Yemen, is further indication of Riyadh's desperation to demonize Tehran in the court of world opinion." Unfortunately for the Saudis, this "is an exercise in futility, and one that casts doubt over the kingdom's own stability and sensibility. The United States' longtime ally is losing its iron-fisted grip over both its people and the region."

However, the historian warns, this loss of control, "coupled with Saudi Arabia's staggering arsenal and unprincipled ruling ideology, makes the kingdom incredibly dangerous – arguably more so than infamous Axis of Evil member Iran."

"Saudi Arabia contends that its provocations of Iran are a principled and urgent rejoinder to a dangerous sectarian rival. But the reality is that the kingdom seeks to distract the international community from its own significant internal weaknesses."

Why Saudi-Iranian Row Becoming 'Costly Game' for Riyadh
These, according to Khan, include the fact that Saudi Arabia "is in dire economic straits. In 2015, it ran a budget deficit approaching $100 billion, and is on track for an $80 billion shortfall this year. Riyadh's decision to boost oil production to enervate competitors like Iran and shale oil producers has driven the price of crude oil down sharply, wrecking its own financial profile" in the process.

Recalling the collapse of global oil prices over the last year, the historian emphasizes that "for a country with an oil sector that comprises 75% of its budget revenues, this loss of income has a serious impact. The kingdom has announced unprecedented austerity measures, including a value-added tax, and has raised the price of gas in the country by 50%."

As for Saudi Arabia's conflict with Iran, its regional geopolitical and potential economic rival, it didn't come out of the blue, Khan recalls.

"During the precarious negotiations of the P5+1 nuclear deal, Saudi Arabia told anyone who would listen that Iran was unreliable, untrustworthy, and inherently bellicose. Much to Riyadh's chagrin, however, Iran has complied with major provisions of the agreement, as with its recent shipment of 25,000 pounds of enriched uranium to Russia."

Facing the Facts: Why Saudi Arabia is 'No Match' for Iran
Moreover, last month, the International Atomic Energy Agency's investigation of Iran's suspected nuclear weapons program concluded that, if such a program ever existed, it ended in 2009, "expediting the lifting of sanctions on Tehran."

At the same time, Khan notes, "while Saudi Arabia persists in its campaign to paint Iran as an aggressive, expansionist regional force, the kingdom has increased its own military expenditure considerably: $11 billion in ships, $1.3 billion in bombs and munitions last year," most of the latter purchased to stock up on stocks exhausted by its war in neighboring Yemen.

"Riyadh's defense budget is in fact five times that of Iran, and the [Gulf Cooperation Council] as a whole maintains a 10:1 ratio of military expenditure over its Persian counterpart. The accumulation of such a large arsenal in a tinderbox locale raises serious questions about who, exactly, is the main destabilizing force in the region."

Fear And Loathing in the House of Saud
At home, Khan points out, the stability of the House of Saud's authoritarian monarchy is in danger, as King Salman struggles "to incorporate a next generation of Saudi royalty: The King's nephew, Mohammed bin Nayef, is the crown prince and presumptive heir to the throne. But it is Salman's own son, Mohammed, deputy crown prince and the world's youngest defense minister at age 30, who is the country's eminence grise and successor to his father's title."

With Mohammed bin Salman's impulsiveness and inexperience leading to the failure of Saudi policy in Yemen, the historian notes, "Western allies and regional acolytes alike nervously consider whether Saudi Arabia will be vulnerable to more campaigns of folly or even a palace coup, depending on who next ascends the leadership hierarchy."

For many years, Khan recalls, "the House of Saud has enjoyed and exploited its moniker of Guardian of Holy Sites," a "status [which] has tamped down criticism by many who fear being denied entry to Mecca for the annual religious obligation of the Hajj." Nonetheless, in recent years, cracks in Riyadh's regional status have nonetheless begun to show.

"Increasingly, dissenters have argued that Saudi Arabia has become a liability to Islam. The 'Vegasization' of Mecca, with its tall, garish buildings and luxury hotels dwarfing the Grand Mosque; the demolition of historically and religiously important sites in the city; and the debacle surrounding yet another stampede during the Hajj have all caused many Muslims to question whether staying silent on Saudi misfeasance is worth the consequences."

Ultimately, "without the presumption of legitimacy from the Muslim world, the credibility of the Saudi regime stands on shifting sands."

'Domino Effect': Iran’s Revolutionary Guard Warns of Saudi Collapse
In the final analysis, Khan suggests, "the kingdom's not-so-subtle implosion has important ramifications for the region. Interestingly, it may have even overplayed its hand with the Obama Administration. In response to the execution of Sheikh Al-Nimr and the ensuing diplomatic downward spiral, the White House has called for both sides to exercise restraint –an interestingly neutral tack when dealing with America's professed central strategic ally and another it does not have diplomatic relations with."

Commenting on this assessment, with perhaps just a hint more optimism than is really warranted, the historian concludes that perhaps now, "after 36 years [following Iran's Islamic Revolution], Washington is no longer interested in placing all of its regional strategic eggs in one basket, especially when stronger, more stable alternatives are readily available."

Ultimately, "the erosion of reliability and judgment by the House of Saud exposes it as a royal family either unwilling or unable to put its house in order. And in one of the world's most volatile regions, that is the most provocative act of all," Khan concludes.