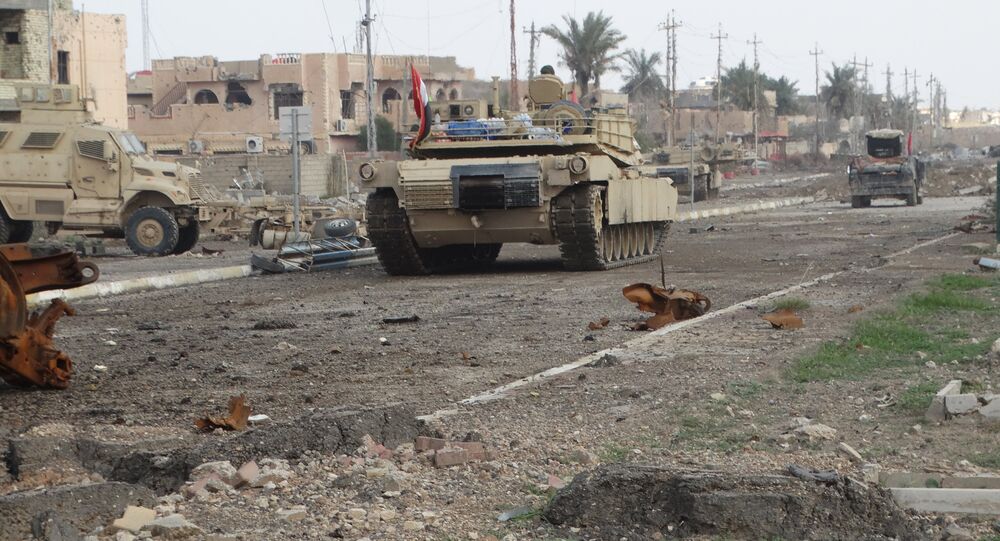 While US officials have touted the success of the liberation of Ramadi from Daesh, the city was largely destroyed in the process. Radio Sputnik’s Loud & Clear delves into what’s in store for the city "saved" by the US coalition.

"For many Iraqis, these attacks are not really liberation. It’s more a handover between one sectarian militia and another sectarian militia," Raed Jarrar, political analyst with the American Friends Service Committee, tells Loud & Clear. "Iraq’s central government and its armed forces are, unfortunately, nothing more than a sectarian militia in the country.

Jarrar, who grew up in Iraq, notes that this sectarian violence may be a permanent fixture for Iraq – one that was not present prior to US involvement.

"That is truly the root of where we live today, where ISIS and the sectarian militias who are Shiite and Kurdish are operating with this framework that was introduced by the United States initially in 1991, and then introduced on the ground as new policies in 2003."

Ryan Endicott, a former US Marine who took part in the occupation of Ramadi in 2005, provides insight into the conditions that led to the city’s capture by Daesh.

"I don’t think that I was surprised at all to see that Ramadi had fallen, specifically because of what I witnessed during my time in the occupation," he tells Loud & Clear.

"Throughout the 8-month period that I was there, between all of the raids and constant bombardment from counter-battery, it became pretty clear that as I patrolled the streets pocked with bullet holes and schools bombed to the ground, that by the time I left, the city had become almost completely inactive…"

Endicott also describes the actions conducted by the US soldiers who occupied Ramadi.

This racist viewpoint led US soldiers to pursue policies that inherently disenfranchised the local population.

"On our patrols, what we did was ransack homes and basically arrest any military-age male being 13 or over. Sand bags over the head, zip ties on the hands…And then I cannot even tell you what happened to the people that were trucked away…"

While it may be tempting to blame US failures on the Bush administration, Jarrar points out that America has been actively engaged in a hostile relationship with Iraq for over two decades.

"It seems that the US has been doing exactly the same for the last 25 years. The plan has been to destroy the country by using military force, and other means when useful," he says, adding that despite the ostensible goal of helping Iraq, the US has actually made the country demonstrably worse.

Despite the so-called “liberation” of Ramadi last month, America’s wave of violence in Iraq is likely to continue as it pursues flawed policies.

"It is the official policy that the US government has adopted that dividing Iraq into ethnic and sectarian regions is a good idea," Jarrar says. "As if we separated Iraqi Sunnis, and Shiites, and Kurds and Christians from each other, the conflict will end.

"[But] the idea that you would separate them is creating a new norm that never existed before," Jarrar adds, describing how people of many ethnic backgrounds lived peacefully together in Iraq for thousands of years, prior to Western meddling.