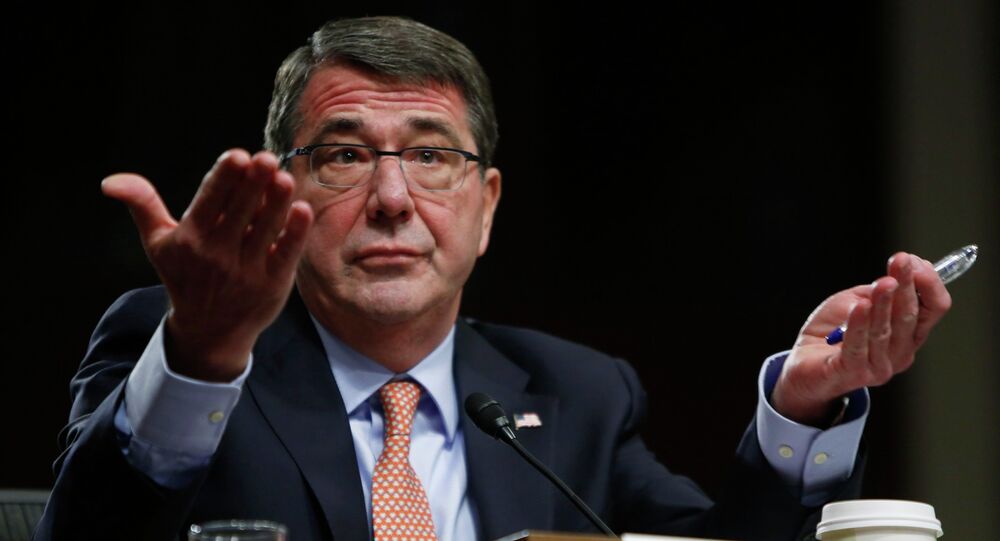 US Defense Secretary Ashton Carter said that Washington’s support of local ground forces in Iraq and in Syria rather than US ground troops, is fundamental in ensuring the Islamic State is defeated in a lasting way.

© AP Photo / Raqqa Media Center of the Islamic State
Number of ISIL Militants Rising Amid Coalition Airstrikes, Assad Says
WASHINGTON (Sputnik) — Syria and Iraq, not the United States, need to be responsible for fighting and sustaining a defeat against the Islamic State (ISIL), US Defense Secretary Ashton Carter said in a speech on Monday.

“But at the end, somebody needs to maintain the peace on the ground and that can't be us [the United States], because that's not our country,” Carter stated. “It has to be people from Iraq and from Syria and that's the logic behind our offering them that kind of assistance, rather than going in with a big ground force.”

Carter stressed that Washington’s support of local ground forces in Iraq and in Syria rather than US ground troops, is fundamental in ensuring the Islamic State is defeated in a lasting way.

© AP Photo / Vadim Ghirda
US, Coalition Forces Conduct 14 Airstrikes Against ISIL - Central Command
Carter explained the United States is trying to build up the Iraqi security forces again so that a multi-sectarian armed force is capable of keeping order in the country that does not commit atrocities or get involved in sectarian squabbles.

A US-led Coalition of some 60 countries has been carrying airstrikes against the ISIL militants in Iraq and Syria since August 2014.

The United States and its allies have recently announced its first steps of a plan to screen moderate Syrian rebels for a US training program to fight against the ISIL.

In January, the US Defense Department announced a team of about 100 US troops were deployed in the Middle East to survey and prepare training locations.

The Islamic State is a Sunni extremist group that has taken over large portions of Syria and Iraq, and declared a caliphate on the territories under its control.