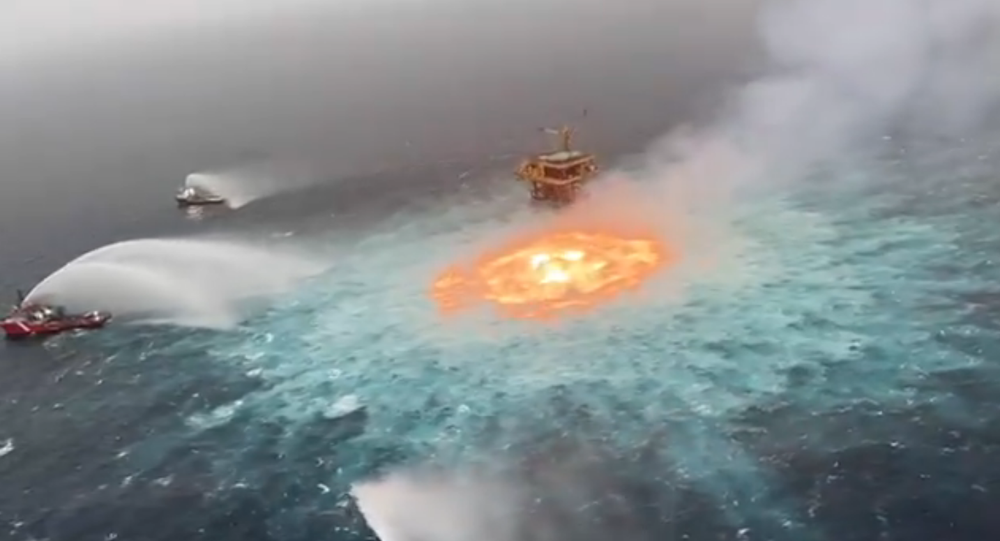 The pipeline that caught fire belongs to Mexican state-owned oil firm Pemex, and, according to reports, the flames have been taken under control. The incident reportedly did not cause any injuries or major damage.

A Pemex offshore oil pipeline caught fire on Friday at the Ku Maloob Zaap oil development region, with footage filmed on-site showing flames shooting from the waters of the Gulf of Mexico.

Pemex later issued a statement to say that the fire has been contained at around 10:45 a.m. local time, naming a gas leak in an underwater pipeline as the reason behind the incident.

"In addition, the interconnection valves in the pipeline were closed, extinguishing the fire and the gas emanation, ending the contingency around 10:45 a.m., and restoring normal operating conditions. No injuries or evacuees are reported", the company stated.

According to Reuters citing an incident report shared by a source, the Pemex crew used nitrogen to control the fire in a pipeline which is used for transporting oil and gas, and a ship arrived later to close a valve in the pipeline.

"The turbomachinery of Ku Maloob Zaap's active production facilities were affected by an electrical storm and heavy rains," the incident report said.

What has already been dubbed by some netizens as a "portal to hell" can be seen on several videos showing flames raging in the sea as several firefighter ships struggle to put it out.

Pemex is the Mexican state-owned oil company, with the Ku Maloob Zaap development reportedly one of its most productive regions, accounting for over 40% of its 1.68 million barrels of daily crude extraction, as noted by Reuters.