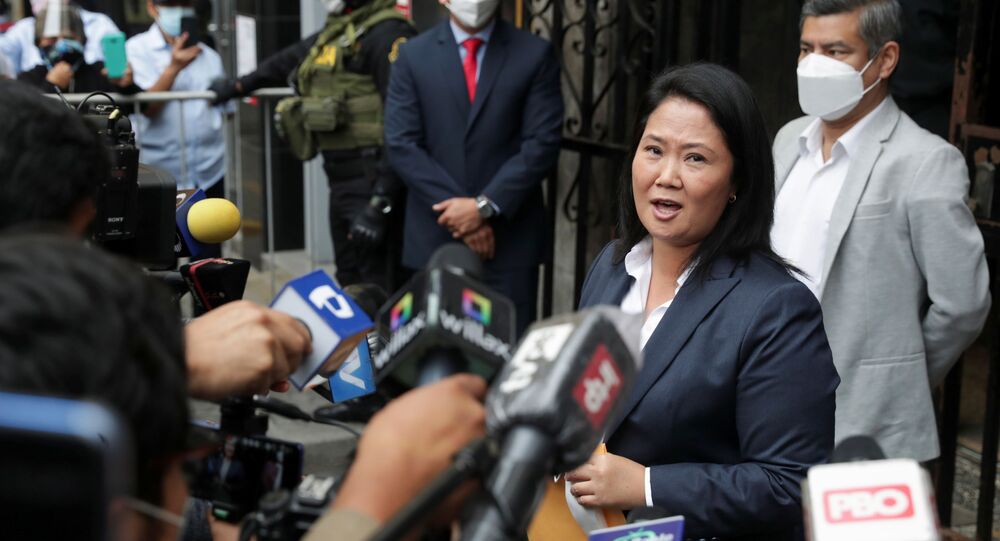 Across Latin America, left-wing political movements are again on the rise, in many cases led by indigenous figures who have united the struggles of indigenous campesinos and urban industrial workers against pro-business governments friendly toward Washington.

Peruvian right-wing presidential candidate Keiko Fujimori has appealed to President Francisco Sagasti to ask for an independent international audit of the June 6 election, which she apparently lost to Pedro Castillo, the left-wing candidate. However, Fujimori’s corporate allies are losing patience.

"Enough already," declared a Sunday editorial in the conservative pro-Fujimori paper El Comercio, owned by the powerful Miró Quesada family. "Today it is clear that what began with the use of legitimate legal resources to question the suitability of some ballots... has started to become an attempt by different political sectors to delay the process as much as possible."

Another on Monday emphasized the impossibility of overturning the election, declaring that “at this point, no one seriously claims that Alberto Fujimori's daughter has won the elections.”

The second round of elections for Peru’s president were held on June 6, and although it took several days for all the votes from overseas and the rural interior to be counted, Peru Libre candidate Castillo has remained in the lead, with 44,000 more votes than Fujimori at the end of counting.

It was clear by June 8, when Castillo’s margin of victory was much wider, that Fujimori had likely lost. However, she has sought to overturn hundreds of thousands of ballots by claiming election fraud by Castillo, although she has not presented evidence to support her claims.

On Monday, Fujimori launched her latest attempt by sending a letter to Sagasti, the outgoing president and a centrist, urging him to ask international organizations to carry out an electoral audit.

Ironically, just two weeks ago Fujimori urged Sagasti on Twitter to stay out of the election process.

“President Sagasti must not interfere with my legitimate right to defend our votes. He has the constitutional obligation to be impartial and stay out of the electoral process,” Fujimori tweeted on June 11. “The president does not generate calm, quite the contrary. The court is not even. There are external actors that are violating the popular will. We will continue to defend our right to vote.”

​It’s not the first time she’s flip-flopped in the campaign, either: in early May, Fujimori dismissed claims of fraud by Castillo as “irresponsible.”

“I think that what’s important here is that it’s fundamental to respect the organizations in charge of holding the elections [and] respect the will of the people, which will be expressed June 6. So let’s keep calm,” she said, according to Kawsachun News.

According to Kawsachun, the National Jury of Elections (JNE) has until July 28 to certify Castillo as the winner, or the Peruvian Congress will have to convene and elect the president - an outcome likely to be in Fujimori’s favor.

All that remains is for the JNE to declare Castillo the victor. However, the body has been paralyzed by Fujimori’s recount ambitions and Luis Arce, one of the body’s four magistrates, quit last week after being outvoted to reject Fujimori’s request for the tenth time. The JNE denounced his accusations of bias as “offensive,” saying he couldn’t resign mid-review. Thus, they would suspend and replace him, which happened on Monday.

A similar tactic to Fujimori’s was deployed by the Bolivian right in October and November 2019, after incumbent indigenous socialist President Evo Morales won re-election. The US and Organization of American States quickly declared the vote to be fraudulent, and right-wing forces soon overthrew Morales and violently repressed the indigenous resistance movement that fought back against the coup. Their defeat was only temporary, as coup leader Jeanine Añez was defeated in the first elections held a year later and Morales’ Movement for Socialism returned to power.

However, in Peru the US, OAS, European Union, and other international observers have all certified the election as free and fair, hailing the National Office of Electoral Processes (ONPE) for a job well done. The only group claiming fraud is Fuerza Popular, Fujimori’s party.

Castillo, the son of illiterate peasants, is a union organizer, schoolteacher, and ardent socialist. Although he has pledged not to nationalize major Peruvian institutions, Castillo’s drive to renegotiate the terms of deals with international mining companies extracting minerals from the Andes has caused many pro-business elements have supported Fujimori, the daughter of jailed former dictator Alberto Fujimori. His reign in the 1990s brought the “Fujishock,” a destructive period of economic shocks as vast parts of the economy were privatized and the country’s currency was replaced.

However, Castillo has also sought to assuage some fears about his future administration by the right by offering to keep Julio Velarde as head of the central bank. Economist Pedro Francke, who serves as Castillo's economic spokesperson, told reporters on Monday that the campaign was in negotiations with Velarde, who has been in office since 2006 but not yet committed to another term.

Both sides held protests in Lima over the weekend: Fujimori supporters carried banners that said “say no to communism” and “say no to fraud,” according to Al Jazeera.

"We are not Chavistas, we are not communists, we are not going to take away property from anyone, that is false... we are democratic," Castillo told supporters on Saturday. "The differences, the inequalities, are over."