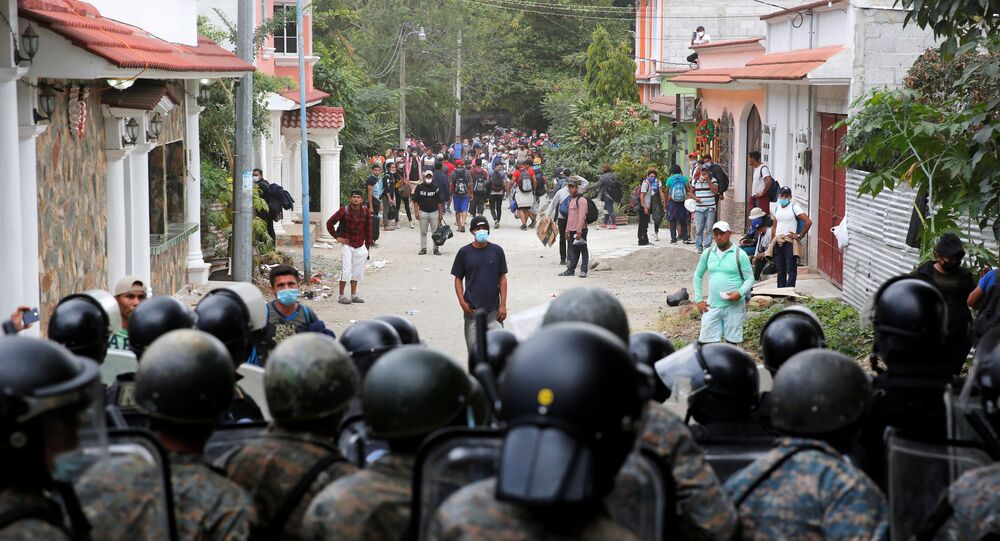 Guatemalan Foreign Minister Pedro Brolo accused Honduras of failing to keep commitments it made to warn its Central American neighbours and the US of new migrant caravans and help with the safe return of the marchers to their home countries.

Members of the latest Central American migrant caravan have agreed to return to Honduras after clashes with Guatemalan security forces.

That was after US president-elect Joe Biden's nascent administration warned the travellers to turn back, dashing hopes that US immigration policy would change with the government in Washington.

“The situation at the border isn’t going to be transformed overnight", a member of Biden's team said. "Now is not the time to make the journey.”

An unspecified number of the would-be immigrants to the US agreed to turn back after a failed attempt to force a path through phalanxes of police and troops in the hamlet of Rio Hondo, Chiquimula province, near the Honduran border.

Police fired teargas and used riot shields to push back the marchers. Several were injured.

"This isn’t a war. It’s a caravan with women and children," Guatemalan caravan member Andres Gomez told Reuters. "The soldiers have no right to beat anyone. There are women who’ve been beaten, it’s an act of violence."

A separate group of 800 migrants were confronted by authorities further north up the CA 10 road in the town of Rio Hondo in neighbouring Zacapa province.

Guatemalan daily newspaper Prensa Libre reported that authorities had deported 1,383 members of the caravan by the end of Sunday and at least 1,500 on Monday alone.

On Monday President Alejandro Giammattei's government accused Honduras of failing to meet commitments it made to Guatemala, El Salvador, Mexico, the US and the United Nations on the caravans tat began in 2018. Those included issuing calls for combined preparations against any repeat of 2018's series of mass migrations, dissuading, aiding and returning anyone intending to join them, and providing humanitarian assistance and safe return for those who do.

Guatemalan Foreign Minister Pedro Brolo was critical of his country's southern neighbour Honduras, from where the caravan had crossed "in an abrupt way and violating national sovereignty."

Brolo had previously called on Honduras to take a "proactive and constructive attitude" towards the caravans.

Guatemalan authorities said they had discovered 21 cases of COVID-19 among those who crossed the border, while Fox News quoted Brolo as saying some migrants had used falsified negative coronavirus tests pass immigration control at the border.

"I believe that the time has come to follow through on the commitment to carry out immigration reform," said López Obrador.

© REUTERS / LUIS ECHEVERRIA
Migrant Caravan Heads to US From Honduras, Calls on Biden Administration to 'Honor Its Commitments'
Between 8,000 and 9,000 people are believed to have crossed from Honduras in the new migrant caravan.

The waves of migrant marches from late 2018 through to early 2020 were initiated by Hondurans, desperate to escape the worsening economic situation in their country since the June 2009 military coup d'etat against left-wing president Manuel "Mel" Zelaya. That coup was supported by the newly-elected administration of US president Barack Obama — to whom Biden was vice-president — and his secretary of state Hillary Clinton.