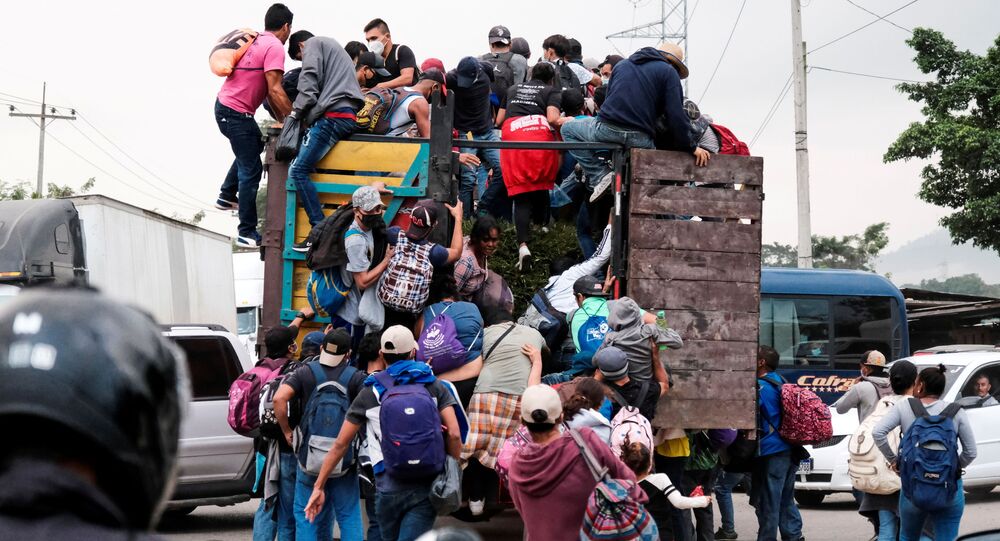 President-elect Joe Biden earlier pledged to create "a fair and humane immigration system" in America, vowing help in addressing the causes of immigration that prompt people from Latin America to move to the US.

Honduran migrants "need to understand they're not going to be able to come into the United States immediately", NBC News cited an unnamed senior Biden transition team official as saying on Sunday.

The individual referred to the ongoing COVID-19 pandemic and the incoming Biden administration's efforts to restart the processing of migrants and asylum seekers on the nation's southern border, which will take plenty of time.

"We have to provide a message that help and hope is on the way, but coming right now does not make sense for their own safety […] while we put into place processes that they may be able to access in the future", the official pointed out.

The remarks come after a caravan with an estimated 9,000 Honduran migrants passed through the Guatemalan border last week.

#Honduras | Thousands of people make up the migrant caravan that left Honduras for the United States.
Since Thursday, they met at the San Pedro Sula terminal to head to the border with Guatemala and continue their journey north.
📹@GildateleSUR pic.twitter.com/S9gFomhz64

The migrant rights group Pueblo Sin Fronteras ["People Without Borders"] said the caravan expects the Biden administration to provide migrants with a warmer welcome than the outgoing Trump administration offered.

The group asked the incoming Biden administration to "honour its commitments", apparently referring to the president-elect's previous promises to reverse most of Trump's immigration policies.

"We recognise the importance of the incoming government of the United States having shown a strong commitment to migrants and asylum seekers, which presents an opportunity for the governments of Mexico and Central America to develop policies and a migration management that respect and promote the human rights of the population in mobility", Pueblo Sin Fronteras said in a statement.

President-elect Joe Biden earlier indicated that he would eliminate the Trump administration's policies on immigrants, end prolonged detention and family separations of migrants in America, halt funding for expanded building of a wall on the US-Mexican border, and revive Obama-era immigration policies.

© REUTERS / STRINGER
Hondurans taking part in a new caravan of migrants, set to head to the United States, queue to receive water from the Red Cross after arriving to the El Florido border crossing point with Guatemala, in El Florido, Honduras January 15, 2021.

It's worth noting that cases of family separation also occurred under the Obama administration, with US President Donald Trump saying in 2019, "We had separations. When I became president, President Obama had a separation policy. I didn't have it".

Biden, in turn, vowed to create "a fair and humane immigration system", pledging help in addressing the causes of immigration that drive people from Latin America to the US.

Acting Customs and Border Protection (CBP) Commissioner Mark Morgan, for his part, slammed the incoming administration's rhetoric, which he said comes as one migrant group has "already gotten through the Guatemala border".

This was preceded by POTUS warning of far-reaching consequences if his immigration policies are scrapped.

© AFP 2021 / GUILLERMO ARIAS
‘It Would Take Us 140 Years to Clear Up’ US From Illegal Aliens, American Migration Chief Says
"If our border security measures are reversed, it will trigger a tidal wave of illegal immigration, a wave like you've never seen before. I can tell that already waves are starting to come up from 2,000 and 1,000, and 500 miles away", he said uttering the words in front of the US-Mexican border wall in Texas.