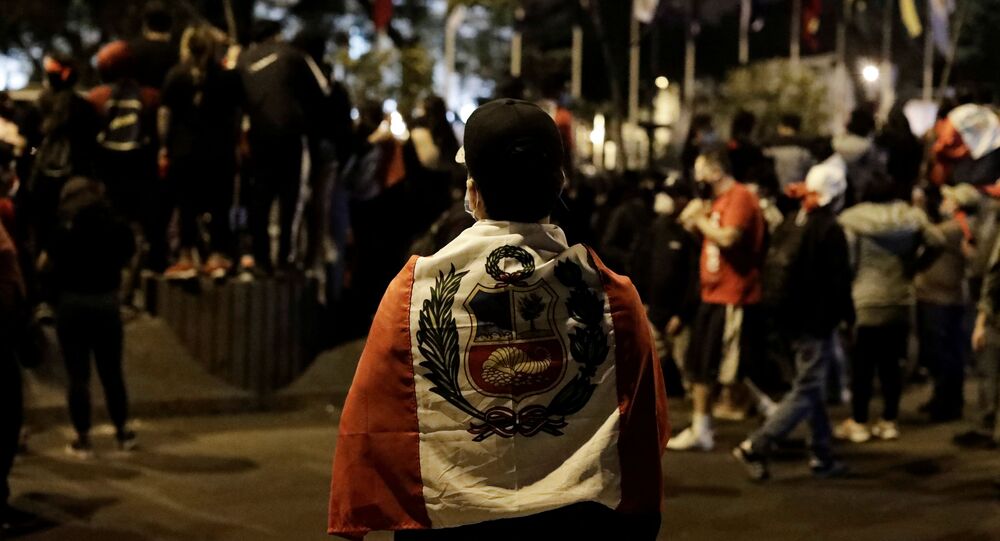 Complaints were also submitted against several police officials and the interior minister, RPP said on Sunday, specifying that the reason behind the move was the death of two people at the Saturday anti-government demonstrations in Peru.

The Peruvian Constitutional Court demanded on Sunday that police conduct a search for over 40 people who remain missing following the protests.

Peruvian Congress chairman Manuel Merino, who had assumed the duties of the country's interim president, announced his resignation on Sunday, after several days of mass protests.

Earlier in the day, 13 of the 18 ministers of the new Peruvian government resigned in protest against police brutality during the mass demonstrations that started in the country after the Peruvian Congress decided to impeach President Martin Vizcarra over bribery allegations, which he denies.

On Saturday, at least two people were killed and nearly 100 were injured during mass protests in Peru against the impeachment of Vizcarra. More than 60 of the injured were hospitalised. Police reportedly used tear gas and rubber bullets to disperse the crowds.

Following the clashes, Vizcarra expressed regret on social media over the protesters killed, praising at the time the efforts to "defend democracy" in the country.

"I deeply regret the deaths that have occurred as a result of the repression of this illegal and illegitimate government. My condolences to the relatives of these civil heroes who, exercising their right, came out in defence of democracy and in search of a better country", the ex-president tweeted.

Peru's Congress impeached Vizcarra over corruption and bribery in a 105-19 vote on Monday, 9 November. In mid-September, Vizcarra already made it through one impeachment vote, which was initiated over his alleged abuse of power for giving away controversial state contracts. Less than a month after that, he was confronted with new charges of bribery and corruption.