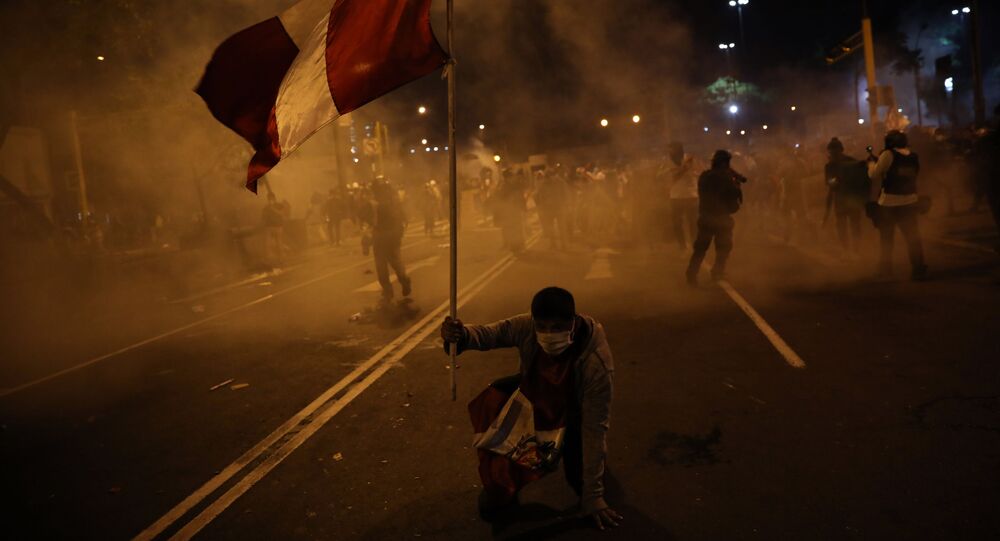 Police Use Tear Gas Against Protesters in Peru's Lima - Videos

Peruvians have been protesting for a sixth consecutive day after lawmakers ousted President Martin Vizcarra over alleged engagement in corruption and replaced him with interim President Manuel Merino, triggering nationwide anger.

The demonstration, however, grew into violence and chaos by the evening as National Police forces fired tear gas to disperse the crowds. Videos circulating on social media show protesters running from thick clouds of smoke and officers in riot gear. Others were seen covering their eyes in tears.

One man was severely injured during the protest, as another video showed, though it is not clear how it happened.

Meanwhile, users on social media suggest the government is mobilising military forces to contain the demonstrations. An APC with soldiers was spotted by witnesses, as well as an armoured vehicle that was seen near the Plaza San Miguel shopping centre.

On Monday, the Peruvian Congress voted 105-19 in favour of the impeachment of Vizcarra over abuse of power, accusing him of giving away controversial state contracts at the time he served as Mokegua Governor. Vizcarra has never pleaded guilty to the accusations pressed against him, and despite disagreeing with the decision of the lawmakers, announced his resignation.