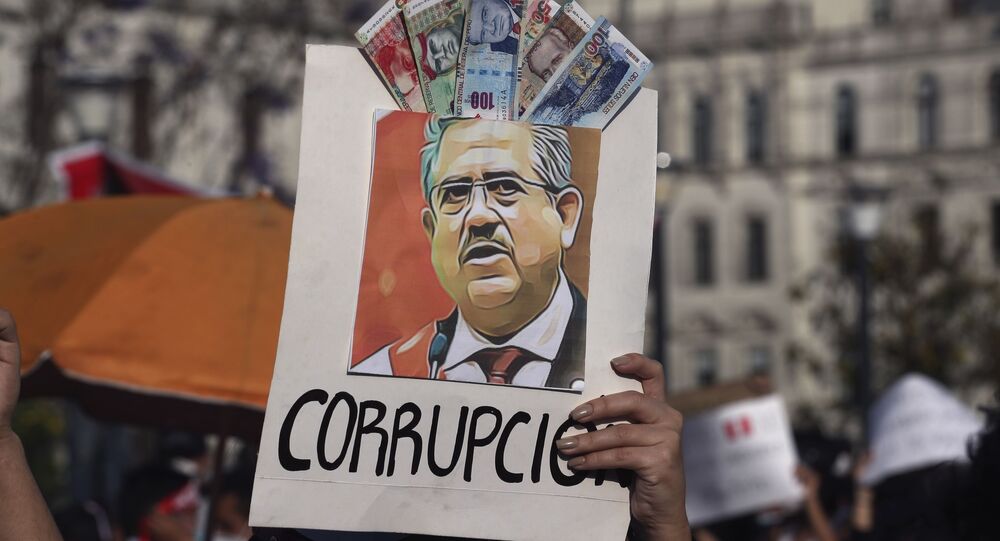 Last week, Peru plunged into a political crisis after the country’s Congress ousted President Martin Vizcarra in an impeachment vote. The politician was accused of bribery, an allegation he categorically denies.

Peru’s interim President Manuel Merino has stepped down less than a week after he assumed the post.

His resignation comes a day after large-scale protests were held in the capital Lima and other cities, with demonstrators demanding he step down. Saturday’s rally began peacefully, but by nightfall it became violent. Two people died during the clashes, while more than 60 were hospitalised.

Merino’s cabinet stepped down in response to the casualties, and the president himself came under pressure to resign.

"At this time, when the country is going through one of the greatest political crises, I want to let all of Peru know that I am presenting my irrevocable resignation from the post of President of the Republic", Merino said in a televised address, adding that he wants the best for the country.

​Peru’s national assembly of regional governments has said Merino was responsible for the "acts of violence” that occurred during the rally on 14 November, while former President Martin Vizcarra blamed the deaths of protesters on the "illegal and illegitimate government". "The country will not allow the deaths of these courageous young people to go unpunished", Vizcarra wrote on Twitter.

​The news of Merino’s resignation has prompted celebration, with many Peruvians applauding and beating pots and pans.

Merino was sworn in as Peru’s interim president on 10 November. The ceremony came a week after the country’s Congress impeached former President Martin Vizcarra in a 105-19 vote. Vizcarra, who headed the country for two years, oversaw an anti-graft campaign that saw him repeatedly clash with members of the Congress. The politician was himself accused of corruption and was ousted by lawmakers, although he is yet to be found guilty of the charges pressed against him. The ex-president has categorically denied the accusations.

Large-scale protests were held in the capital Lima and other cities across the country following the nomination of Manuel Merino.

"The march is not for Vizcarra to return, it is strictly against Merino. We are tired of corruption, of the usual politicians who divide and impose their personal interests", one of the demonstrators told Reuters during the anti-Merino protest.

The political crisis in the South American country comes at a time when Peru is battling the coronavirus outbreak and experiencing its worst economic contraction.