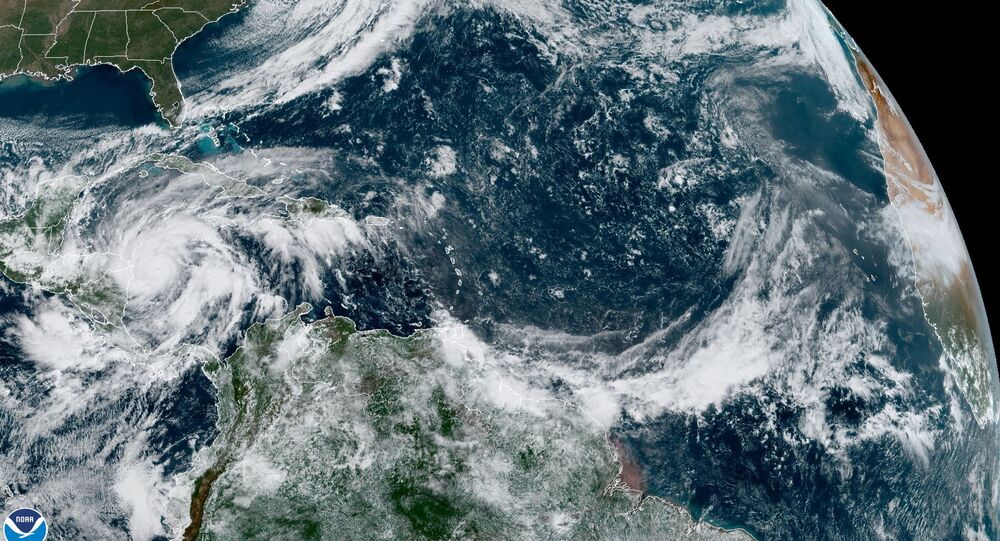 Hurricane Eta, the 28th named storm of the 2020 Atlantic hurricane season, rapidly intensified into a Category 3 cyclone Monday, and is due to soon strike Central America, bringing with it severe winds and inches of rain that are expected to create landslide conditions.

The US’ National Hurricane Center indicated in its latest release that the powerful storm is forecast to make landfall sometime Tuesday as a “major hurricane” anywhere from Nicaragua’s Sandy Bay Sirpi to the country’s border with Honduras.

At present, the cyclone is roughly 85 miles from Cabo Gracias a Dios, a cape situated between the Nicaragua-Honduras border, and moving at a pace of 9 mph. Eta has reached maximum sustained wind speeds of 120 mph.

Hurricane-force winds have been recorded some 25 miles out from the storm’s eye, whereas tropical storm-force winds are said to extend outward up to 115 miles.

While the cyclone is expected to weaken somewhat after making landfall and moving inland, forecasters have warned that the powerful hurricane’s heavy rains are of major concern for all of Central America.

Nicaragua and Honduras alone are forecast to endure anywhere between 15 to 25 inches, with isolated portions experiencing up to 35 inches of rain. Elsewhere, in Guatemala, Belize, Panama and Costa Rica, residents may see up to 25 inches of rain. El Salvador, Southern Haiti and the Cayman Islands have the lowest anticipated rainfall in the region, at just 3 to 5 inches.

As for storm surge, the tide in areas along Nicaragua’s coastline may see water levels spike by as much as 12 to 18 feet, whereas Honduras may experience a 3 to 5-foot surge along its coast.

Although the storm is registering as a Category 3 hurricane, forecasters anticipate the cyclone may rate much higher on the Saffir-Simpson Hurricane Wind Scale in the coming hours. Examining satellite data, Ryan Maue, chief scientist with the US’ National Oceanic and Atmospheric Administration, noted Monday via Twitter that Eta appears to have developed a pinhole eye, which suggests that the cyclone will turn into a very powerful hurricane.

Maue predicts that should Eta’s pinhole eye remain, “then obviously intensity forecasts may need to be increased to near Category 5” status. The last cyclone to reach Category 5 was Hurricane Lorenzo, which also garnered much attention for having appeared so far to the east.

Even more concerning, Maue explained in a separate post that some hurricane models suggest Eta could stick around in the Caribbean for a longer period of time than most storms - possibly one to two weeks.

“Global models e.g. [The European Center for Medium-Range Weather Forecasts] indicate a re-birth into [a] monster storm in the Caribbean next week,” Maue stated.

It’s anyone’s guess how Eta may develop, as officials have stressed that it’s still much too early to know for certain. The 2020 hurricane season still has one more month to go, ending on November 30.