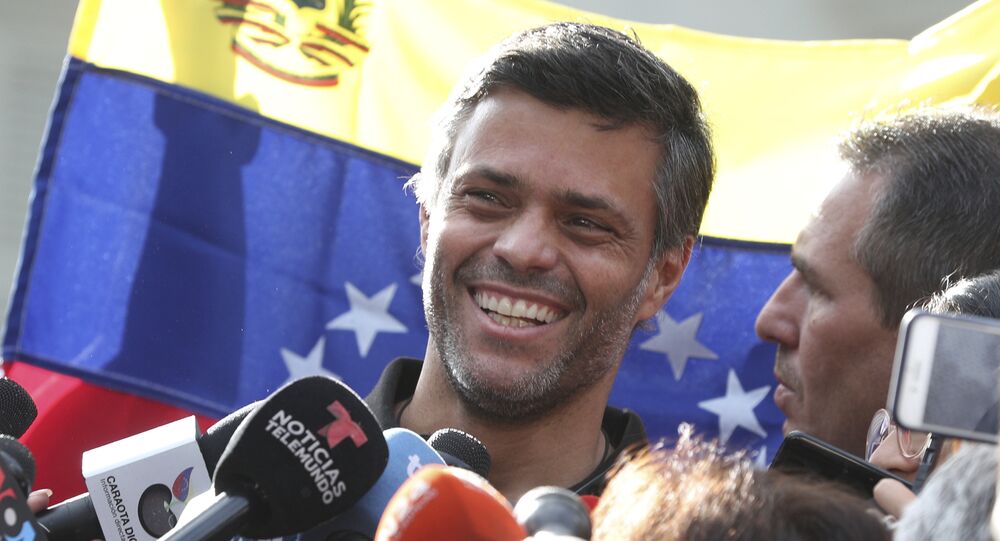 On Saturday, Leopoldo Lopez's father claimed that his son his son had left his refuge at the Spanish Embassy in Caracas "about two days ago" and crossed the border into Colombia.

The independent Spanish news agency Efe has cited unnamed sources as saying that Venezuelan opposition leader Leopoldo Lopez arrived in Madrid on Sunday after he reportedly fled the residence of the Spanish ambassador in Caracas. Both Spanish and Venezuelan government officials have yet to comment on the matter.

Earlier in the day, Efe reported that Venezuela's Bolivarian National Intelligence Service (Sebin) had started house-checking a residential building where diplomatic personnel and the Spanish security forces reside, apparently in search of Lopez.

The report came after the opposition figure's father claimed in an interview with the AFP news agency on Saturday that his son had left the embassy "about two days ago" and crossed the border into Colombia on Friday.

He added that his son was on his way to the Spanish capital Madrid, where he allegedly plans to be reunited with his wife and three children.

© AFP 2020 / Marcelo Garcia/Venezuelan Presidency
Maduro: Guaido Hammered Out Venezuela Coup at the White House in February
Lopez had been staying at Spanish Ambassador Jesus Silva's residence in the Venezuelan capital since 30 April 2019, after an attempted uprising against the government of President Nicolas Maduro.

In 2014, the opposition figure was sentenced to 14 years in prison after he was charged with being responsible for mass protests earlier that year which claimed the lives of more than 40 people.

The 49-year-old has been under house arrest since the summer of 2017, but last year he was released by supporters of Venezuelan opposition figure Juan Guaido.

A Venezuelan court then issued an arrest warrant for Lopez, saying that he had violated the terms of his house arrest and that he should serve the remainder of his 14-year sentence in prison, something that promoted Lopez to seek refuge at the residence of the Spanish ambassador in Caracas.

The United States and several other countries have sided with Guaido, while Russia and China, among other nations, have stood by the legitimacy of the incumbent president, Nicholas Maduro, who slammed Guaido as a US puppet.

Venezuela Aims to Overcome Effects of US Sanctions With New Legislation, Maduro Says