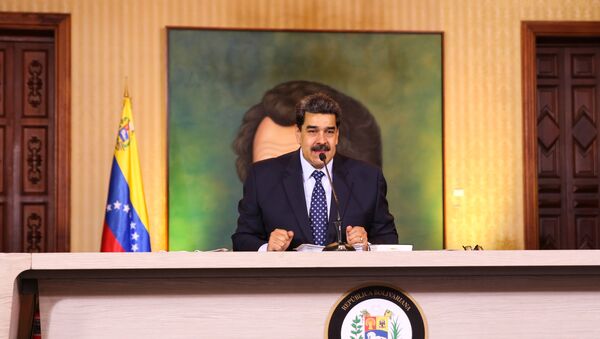 President Maduro's accusations that the plan to overthrow him was hatched in the heart of American democracy are apparently based on the testimony of one mercenary who got arrested after a botched raid this month.

Opposition leader Juan Guaido had discussed a sea invasion in Venezuela during a visit to the White House, President Nicolas Maduro claimed in a televised speech on Wednesday.

"It was at the White House on 4 February of this year, 2020, where Juan Guaido met with Jordan Goudreau, head of [private security firm] Silvercorp, by order of Donald Trump to articulate the plan of attack," Maduro said.

He added that "it would be very easy to verify Goudreau's presence" at the White House between 2019 and 2020 and "in which room he met with Guaido".

Guaido, the US-backed self-declared leader of Venezuela, did visit Washington, DC on 4-5 February, where he even attended Donald Trump's State of the Union address. Trump welcomed him as Venezuela's "true and legitimate" leader and called Maduro a "tyrant", but there is no evidence so far that Maduro met Goudreau at the time.

Venezuelan authorities this month thwarted an incursion of dozens of armed men on high-speed boats in the northern coastal state of La Guaira, code-named Operation Gideon. Eight of the raiders have been killed and at least 48 others, mostly Venezuelan army deserters, have been arrested.

Maduro's accusations appear to stem from the interrogation of one arrested dissident, Antonio Sequea, who testified that Jordan Goudreau had told the mercenaries about a White House meeting he had with Guaido. According to Sequea, the goal of the operation was to bring down the president and fly him to the United States, which offered a $15-million bounty for his capture.

Among those arrested also were two US citizens, Luke Denman and Airan Berry. Denman, a Texas native, said in a video aired on Venezuelan TV that the contract for the operation had been signed by Juan Guaido. He did not bring up any meeting at the White House.

Denman also recounted that Goudreau, a US military veteran, was receiving orders directly from Donald Trump; the mercenary had expected to receive between $50,000 and $100,000 for his role in the incursion.

Goudreau stated that he was hired by Guaido and that the latter signed an 8-page "general services" contract with Silvercorp in October 2019. Guaido, who led another unsuccessful coup in April 2019, maintained that he was not involved in the incursion, although a copy of the $213-million contract shared with The Washington Post by the Venezuelan opposition appears to contain his signature.

Goudreau is said to have been investigated by US law enforcement officials, though it remains unclear whether any charges will be pressed against him since the Trump administration does not recognise Maduro's government. Donald Trump, who said last year that "all options" would be on the table to remove Maduro, denied responsibility in the raid.