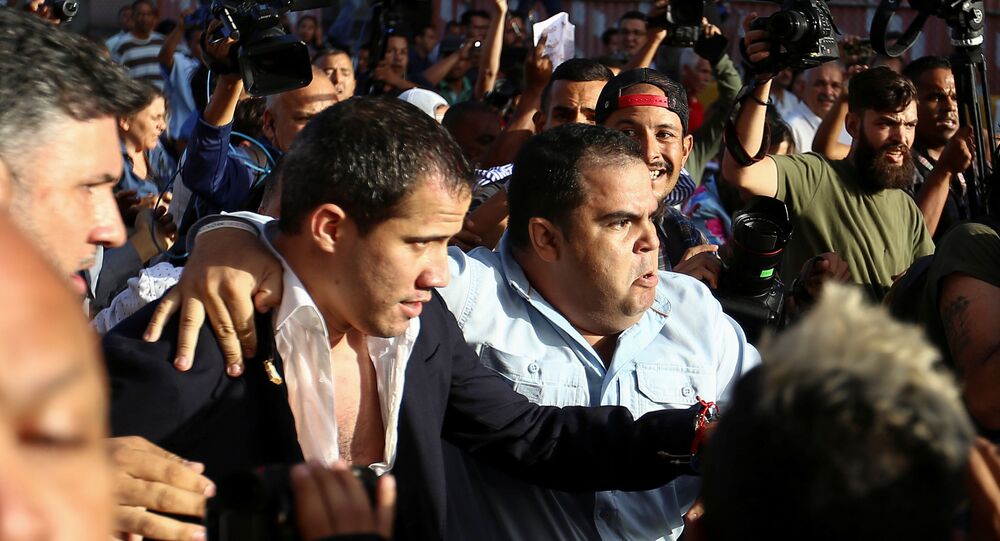 Juan Guaido did not appear to receive a warm welcome from Venezuelan citizens upon his return to the country on Tuesday, as he was confronted by waves of protesters who voiced their displeasure with the opposition leader.

Guaido gleefully announced that he had touched down in Caracas, Venezuela, on February 11 following a weeks-long international tour in which he met with several world leaders.

“I bring the commitment of the free world, willing to help us recover Democracy and Freedom,” he said in a Tuesday social media post. “A new moment begins that will not admit setbacks and that needs us all doing what we have to do. The time has arrived.”

While his return to the country appeared to go smoothly judging from his personal social media account, the actual situation was much more chaotic - and literally messy - for Guaidó, as evidenced by videos of the scene shared by his detractors online.

Another video showed Guaido being confronted around the same time as his photo-op for his personal Twitter post shown above.

“Traitor! You’re a traitor to the homeland!”

Juan Guaidó arrives in Caracas after his latest regime change lobbying tour and is immediately jeered and confronted by an employee of a Venezuelan airline sanctioned by his US paymasters pic.twitter.com/SxaimDzgKl

Even outside the airport, Guaido was met by a large group of protesters who chanted “asesino,” which translates to “murderer” in English.

Venezuelan media outlet “Misión Verdad” said that demonstrators were calling Guaido a murderer due to the broad economic sanctions leveled against Venezuela by the US in August 2017 and January 2019. According to an April 2019 report from the Center for Economic and Policy Research, US sanctions were responsible for “40,000 deaths from 2017–2018” in Venezuela.

Guaido departed Venezuela on January 19 and began his international tour in Bogota, Colombia, where he met with President Iván Duque and flouted a travel ban placed on him by Venezuelan President Nicolás Maduro’s government. Since January 2019, Guaido has maintained that Maduro’s government is illegitimate and that he is the rightful “interim president” of the country. While the US and roughly 50 other countries support his claims, three-quarters of the globe does not, and Maduro remains firmly in power a year later.

Guaido then went on to Europe, where he was met by demonstrators who called for the so-called leader to be put on trial “for having attempted to overthrow the democratically elected government” in Caracas.

He also delivered a speech at the World Economic Forum in Davos, Switzerland, before traveling to North America to visit both Canada and the US.

US President Donald Trump, who was then still caught up in an impeachment trial in the US Senate, was able to get bipartisan support when he introduced Guaido as his special guest during his State of the Union address earlier this month.