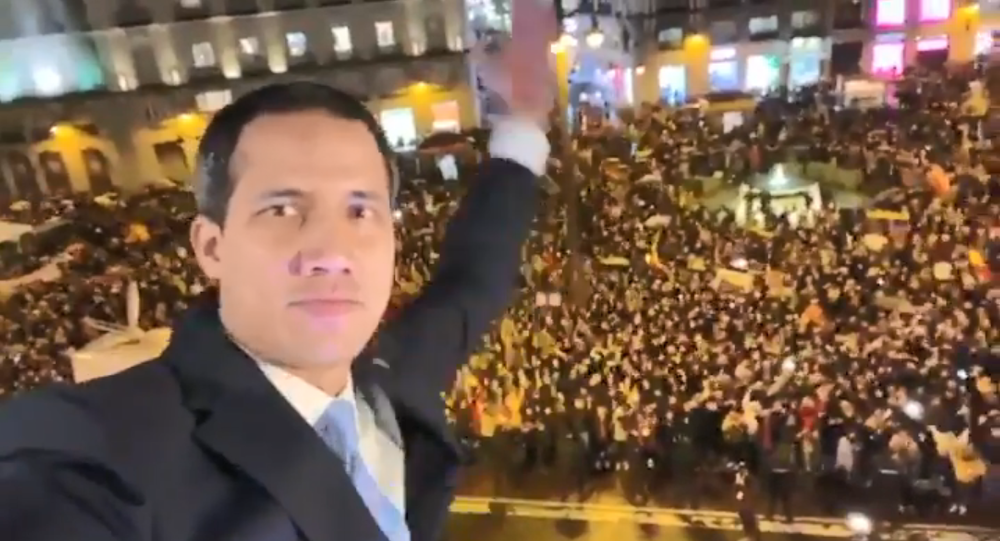 Venezuela’s self-proclaimed “interim president,” Juan Guaido, has been on a “world tour” in recent weeks. However, one scholar told Sputnik Guaido’s search for support abroad shows the final collapse of his legitimacy in Venezuela, and the US and Canada will soon discard him and find a new puppet for regime change.

On January 23, the one-year anniversary of his failed putsch against Venezuelan President Nicolas Maduro, Guaido spoke before the World Economic Forum in Davos, Switzerland, where he called on foreign countries to continue supporting his movement.

Even the New York Times, once a vocal champion of Guaido and his bid to oust Maduro, was forced to concede that at Davos, Guaido “seemed like a man whose moment had passed.”

Prior to his European appearance, Guaido met with US Secretary of State Mike Pompeo in Colombia, and after Davos he visited Spain, France, the United Kingdom and Belgium, where he met UK Prime Minister Boris Johnson and European Union foreign policy chief Josep Borrell.

The next stop on his “world tour” was Canada, where he met with Prime Minister Justin Trudeau, who reaffirmed his commitment to supporting Guaido’s bid for power. Guaido claims Maduro’s 2018 reelection was illegitimate and that he is the rightful leader of Venezuela - a claim backed by about 50 countries, mostly European and American. However, three-quarters of the globe continues to do business with Maduro.

Author and speaker Arnold August told Radio Sputnik’s Loud and Clear Thursday that Guaido’s reception in Ottawa was cold outside of the government ministers and Venezuelan expatriates with whom he met - the result of tireless work by activists and alternative media “to bring the other side of the story to the people in Canada and the United States.”

“The basic reaction from amongst the people who are aware of what the real situation is - namely, that Guaido is nothing less than a puppet of [US President Donald] Trump to overthrow the democratically-elected government of Maduro,” Arnold told hosts Brian Becker and John Kiriakou. “I would say the photographs of Guaido and Trudeau, taking selfies with each other and all that, it stimulated fantastic shame and outrage against thousands or hundreds of thousands of people right across Canada.”

“More than ever, people are seeing that Trudeau, not only with regards to the Venezuela policy, but also with regards to the international policy towards Saudi Arabia, Israel, war against Iran, having troops in Iraq, etc, despite the demand that Canada and the US leave Iraq … I would say that the sentiment against Trudeau, as perhaps the most pro-US [prime minister] since World War II, this sentiment, this outrage, has increased manyfold.”

​Arnold said the “diaspora” in Canada, who left Venezuela after the socialist movement led by Hugo Chavez and later Maduro took power, and with whom Guaido met during his visit, was nothing more than a “fifth column … an extension of US imperialism within Canada.”

However, the writer cautioned that Canada isn’t the “innocent bystander” to US imperialism it often pretends to be: “Canada itself has exercised 13 sanctions against Venezuela, and they have issued a … request to the Bolivarian Army to revolt against Maduro. If this happened, it would result in a civil war, something very, very far from a ‘peaceful transition’” to democracy, which Trudeau claims as his goal.

​Noting that Guaido’s support in Washington has so badly waned that he couldn’t get even a 15-minute audience with Trump at Davos, Arnold said the former National Assembly speaker wasn’t faring much better in Canada. Arnold pointed out that Canadian television no longer refers to Guaido as Venezuela’s “interim president,” but rather “demoted him on the spot to ‘opposition leader,’ which is not quite the same.”

Indeed, even Guaido’s own cadres no longer seem to afford him the honor of an interim presidency: when the Guaido government's former “attorney general,” Jose Hernandez, tendered his resignation on Wednesday, he addressed Guaido as “president of Venezuela’s National Assembly.” However, he doesn’t even hold that office any more, having lost his reelection bid earlier this month - and then proceeded to claim it was rigged by Maduro.

Questions for @ignandez: why did you address @jguaido merely as President of Venezuela’s National Assembly? Is that all he is to you? I thought he was president of the nation? Can’t you guys do *anything* right? pic.twitter.com/VgmxIPfrbE

​Instead, Arnold suggested Washington was “biding its time” and looking for a “better symbol of opposition to Maduro … They will throw [Guaido] away like a rag, as they do with anyone else when the person no longer serves the interests of the United States.”

​“I think Guaido has really come to the end of his career, because the fact that he had to leave Venezuela, where he has no support, and try to get those selfies and photographs to give the impression that he has support in other countries, that in itself is an admission of defeat. Why didn’t he stay in Venezuela and try and get more support and organize a general strike? Of course, he cannot do it; he’s been blocked by the Venezuelan government and the military-civic alliance, and this is a desperate attempt for him, and his allies such as Trump and Trudeau, to resuscitate the Guaido image,” Arnold told Sputnik.