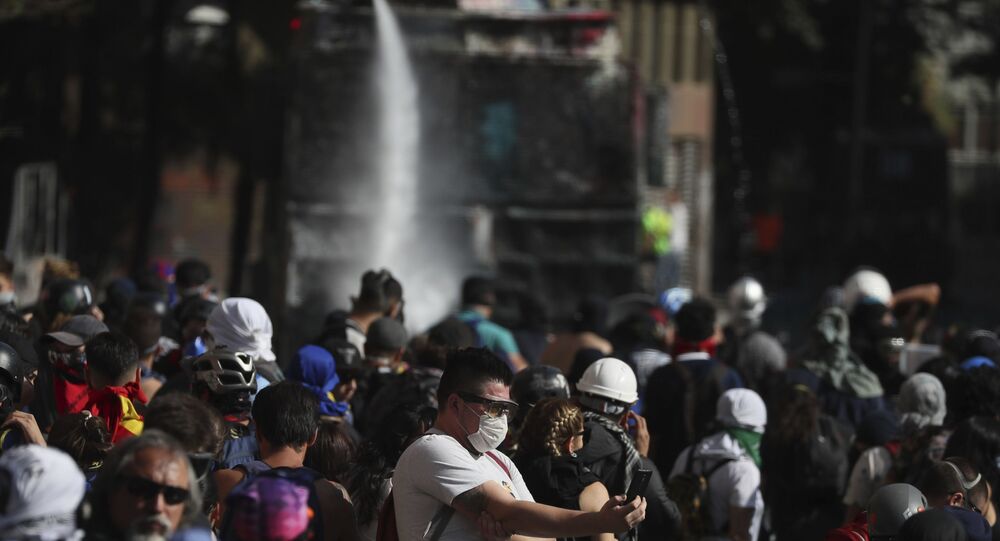 'Likely Linked to the Russian State': US Looks for Almighty Hand of Moscow in Latin America - Report

US experts are again claiming that Russian social media campaigns have disrupted US elections, sowed anti-Western sentiment in Africa, and "inspired China and Iran to adopt similar tactics against protesters and political adversaries", the New York Times alleges, attempting to highlight the purported global influence of Moscow.

The New York Times on Sunday alleged, citing analysts from the US Department of State, that Russia’s online influence campaigns in Latin America have been active for a long time.

In particular, the analyses suggested that Twitter accounts "likely linked to the Russian state" produced a number of posts during the 2019 unrest in Ecuador, Peru, Bolivia, Colombia and Chile, according to the media report.

State Department experts concluded that this short-term spike of activity is "likely linked" to social media accounts and could be regarded as evidence of a powerful disinformation campaign, The New York Times said.

According to State Department officials cited by The New York Times, purported Russian efforts in Latin America "appear aimed at stirring dissent in states that have demanded the resignation of President Nicolás Maduro in Venezuela".

“We are noting a thumb on the scales [...] It has made the normal dispute resolutions of a democratic society more contentious and more difficult”, said the deputy assistant secretary of state, Kevin O’Reilly, cited by The New York Times.

The report, cited by the US-based media outlet, concludes that the surge in unrest in Latin America in 2019 cannot be attributed to any one particular factor, leaving an alleged Russian-linked influence campaign in question.

As an example of their findings, experts allege that RT Espanol and Sputnik Mundo have been a primary source of information for Russian-linked Twitter accounts. Another supposed pattern "spotted" by American analysts suggests that certain Twitter accounts posted in Spanish and English were targeting the Chilean public and foreign audiences last autumn, according to The New York Times.

© REUTERS / Larry Downing
Ex-CIA Chief of Russia Ops: US Has Carried Out Election Meddling Historically
Chilean authorities have also reportedly made their own findings, suggesting that one-third of all social media posts during the nationwide unrest in 2019 were disseminated from abroad. Chileans have, however, questioned the document as the posted figures fail to show reliable evidence that a foreign power played a role.

According to The New York Times, citing State Department data, a Twitter campaign with the hashtag #chile - popular among the allegedly Russian-linked accounts in October 2019 during the peak of the unrest in the Latin American nation - failed to gain even the bottom position in the regional top 100.

Russia has been constantly blamed for waging influence and meddling campaigns throughout the world, in particular in the US, the EU, as well as some Africa and Latin American countries. Moscow has repeatedly denied all the accusations, highlighting that no proof has been ever furnished.

On Friday, Acting Secretary of the US Department of Homeland Security (DHS) Chad Wolf accused Russia of pursuing tactics that includes actions "that disrupt and undermine the American way of life", saying that the US is expecting "Russia to attempt to interfere in the 2020 elections to sow public discord and undermine our democratic institutions".