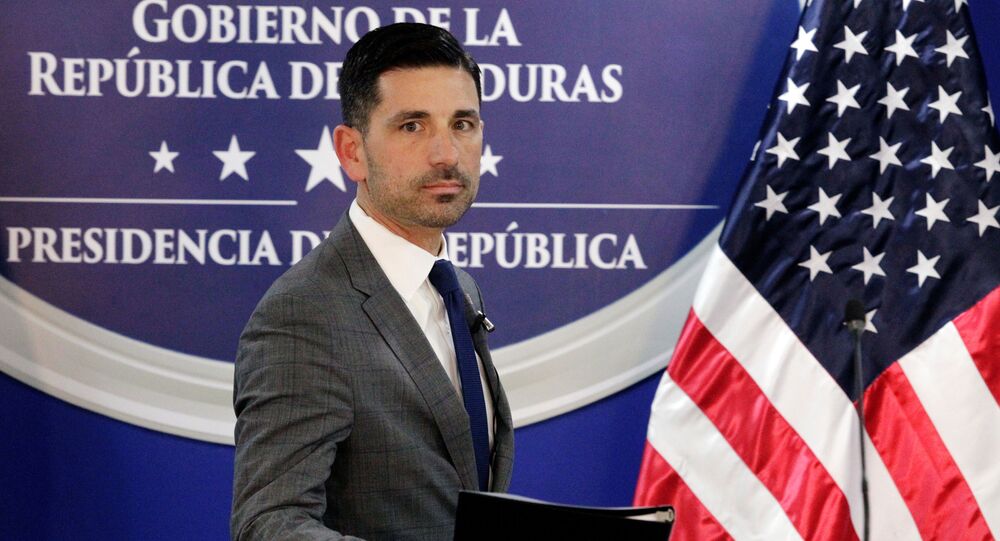 Russia has been accused of interference in the US presidential elections in 2016, allegedly using hacking and disinformation tactics to boost the chances of the current US president, Donald Trump, to win the race, although there has been no substantive proof of any Russian interference over the past four years.

Acting Secretary of the US Department of Homeland Security (DHS) Chad Wolf joined the ranks of US officials who observe the DC political creed that Russia interferes in US internal affairs.

Wolf, in his 17 January speech, most of which was dedicated to what he referred to as the "top threats facing the Homeland" - Iran, China and Russia, claimed that even though Moscow does not strive to diminish the US role in the international arena, the nation is nonetheless looking to disrupt and undermine the "American way of life".

"Lastly, let me touch on Russia. Unlike China, Russia doesn’t seek to weaken our economy and surpass us on the world-stage; rather they focus on actions that disrupt and undermine the American way of life. As we saw in 2016, we fully expect Russia to attempt to interfere in the 2020 elections to sow public discord and undermine our democratic institutions", Wolf, serving as DHS acting secretary since November 2019, said, during an event hosted by the Homeland Security Experts Group in Washington DC.

The official claimed that the 2018 midterm elections were “the most secure elections in the modern era” as the US created "classified and unclassified election war rooms" that "connected election officials in all 50 states, political parties, social media companies and agencies across the US Government, including DOD, the FBI and the Intelligence Community".

“Let me be clear: We are prepared,” Wolf said. “More importantly, the state and local officials who run our elections are prepared. We are working with our federal partners to make sure those officials on the front lines of our elections have the information and the tools they need to combat Russian interference.”

"In 2020, we’re doing this and more to prevent our adversaries from degrading faith in our democracy and election results", Wolf said.

The acting secretary acknowledged that “100 percent security is never realistic” and asserted that US federal government and intelligence agencies were “laser-focused” on securing the upcoming elections.

US intelligence agencies and lawmakers have accused Moscow of meddling in US elections since Trump’s 2016 victory, a political event that provoked allegations of Trump's cooperation with Moscow as a means spreading anti-opponent propaganda online.

The US Department of Justice at the time launched an investigation headed by US Special Prosecutor Robert Mueller but the report concluded that no sufficient evidence existed to prove the allegations.

Both Trump and Russian officials have together repeatedly denied claims that they worked together to influence the results of the election.

In December 2019, Russian Foreign Minister Sergey Lavrov said that he had not seen any proof in support of allegations that Russia interfered in US elections, arguing that "No one has given us this proof because simply it does not exist", while noting that Moscow is prepared to exchange assurances with Washington on non-interference in each other’s domestic affairs.

Besides the US, the narrative of Russian involvement in the internal affairs of other countries has been used by a variety of European nations, however, again, no proof has been furnished.

In November 2019, El Pais published several stories alleging Russian influence in Catalonia, according to Spanish intelligence officers, again without providing evidence. The Russian embassy in Spain responded by joking about the allegations.

"With regards to the tireless work of El Pais researchers on linking the source of the Catalan crisis to Russia, we would like to draw their attention to a revealing fact. There is a suspicious coincidence: the number of the alleged Russian unit, which is mentioned in the newspaper, ends with 155, which itself creates a new reality. So - [follow] the trail," the embassy tweeted.

Spain's constitution contains Article 155, used by Madrid to suspend Catalonia's autonomy and violently introduce direct rule in the wake of a 2017 independence declaration.