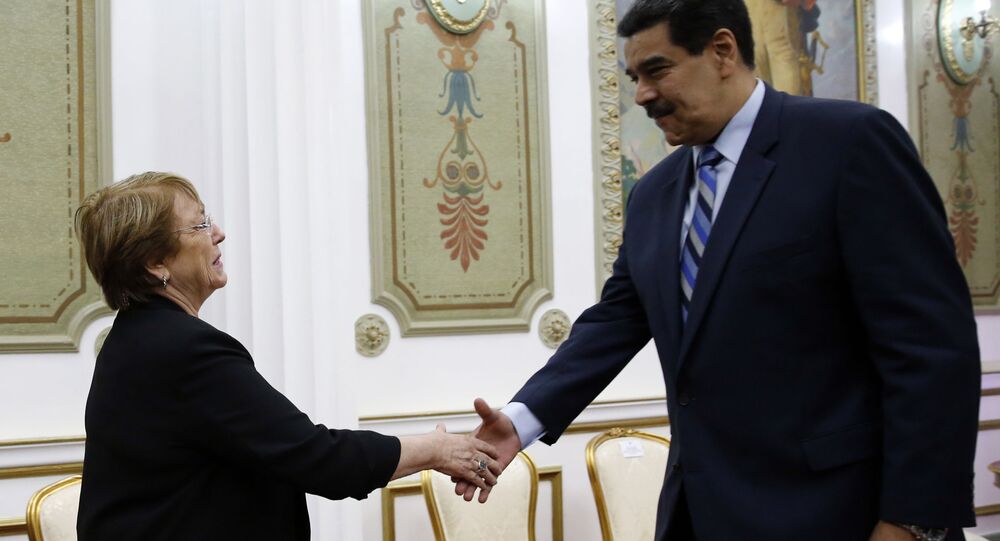 The United Nations high commissioner for human rights, Michelle Bachelet, wrapping up an official visit to Venezuela on Friday, will leave two delegates in the troubled nation to monitor the situation, Reuters reported.

"There are always going to be different criteria in every country, but I told her that she can count on me, as president, to take her suggestions, her recommendations and her proposals seriously", Maduro said, cited by AFP.

In a separate statement, Maduro said later that "it was a good visit […] During the visit of Michelle Bachelet today, we made the first step to rapprochement between the Venezuelan government and the Venezuelan society for the development of relations in the area of human rights. We are moving forward. I believe that this visit was successful for Venezuela as a whole and the system of international law".

Bachelet, who arrived in Caracas on Wednesday, also met separately the opposition leader Juan Guaido. The UN human rights chief did not speak publicly after meeting with Guaido on Thursday, Reuters reported.

Maduro said earlier that Bachelet's visit would contribute to an improvement of human rights in the country.

Venezuela has been tense since January, as anti-government protests fueled by opposition leader Juan Guaido’s move to proclaim himself the country’s interim president, erupted. Maduro slammed Guaido, saying he acted at the orders of the US, which seeks to install him as the country’s president and gain access to Venezuela’s vast oil assets.

Washington, which has backed Guaido, blocked some of Venezuela's oil assets and imposed sanctions on the Venezuelan state-owned oil and gas company PDVSA.

A number of countries, however, including Russia, China and Turkey, have backed the constitutionally-elected Maduro as the legitimate leader of Venezuela.

The political crisis has been compounded by a concurrent economic crisis as the US has imposed several rounds of sanctions against Venezuela.