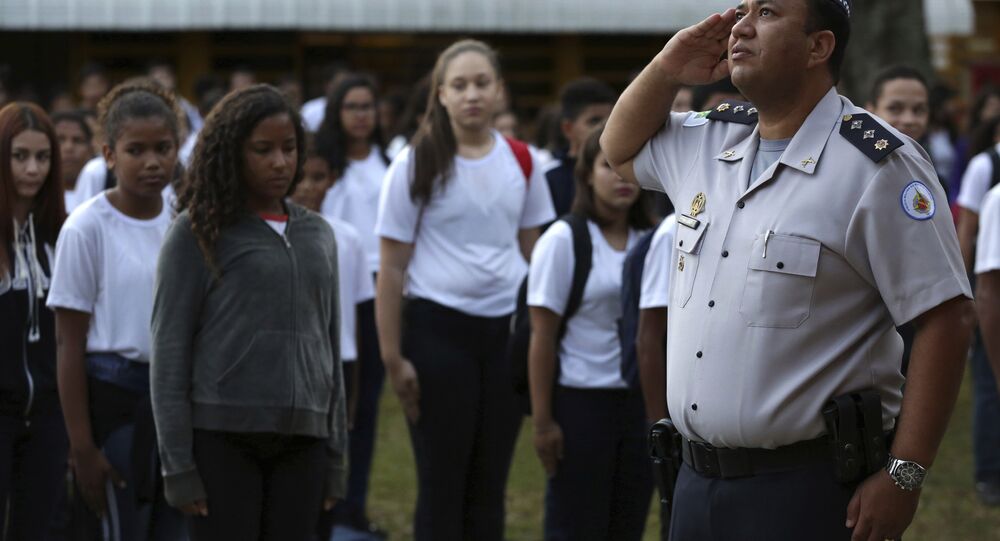 A couple of years ago, then-Brazilian presidential hopeful Jair Bolsonaro, a former army captain, campaigned on promises to improve the country’s schools and boost academic performance at troubled institutions.

The government of Brazilian President Jair Bolsonaro is seeking to expand the number of schools nationwide that are co-run by armed police in a bid to improve discipline and academic results, the AP news agency reports.

In the Brazilian capital Brasilia, 36 more such schools are due to be established by the end of this year and may reach a total of 200 by 2022.

READ MORE: Brazil's President Bolsonaro Says Venezuela Can Not Stay As It Is — Report

Under the new model, while teaching remains in the hands of the Education Ministry, police officers oversee discipline and enforce a new code of conduct at Brazilian schools, something that was approved by a majority of parents, teachers and school staff during a referendum.

Several Brazilian states have used the model since the early 2000s, even though many education experts and teachers' unions are alarmed over larger expansion, insisting that such schools are out of line with the concept of a free and open-to-all public schooling system.

© AP Photo / Leo Correa
Brazil’s Bolsonaro Says Holocaust Can Be Forgiven, Mustn’t Be Forgotten
The fears were shared by 17-year-old Michael Pereira da Silva from the Ceilandia state school No. 7 in Brasilia, who was quoted by AP as saying that she opposes the government’s decision to hire police at schools so as to create military-like discipline there.

During his election campaign, Bolsonaro specifically tried to capitalise on promises to improve the country’s academic performance, with Brazil ranked 63rd out of 72 countries and regions in a study conducted by the Organisation for Economic Cooperation and Development (OECD) in 2015.