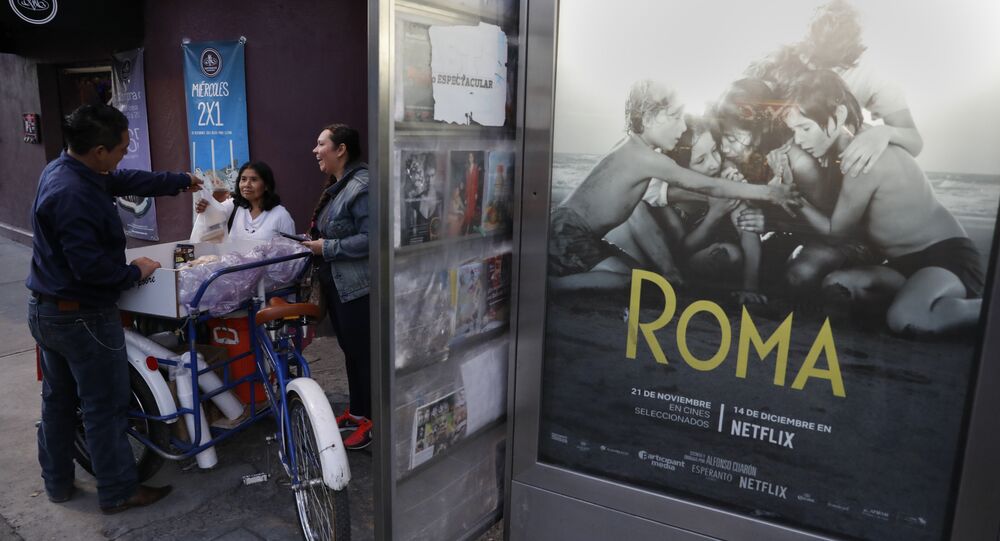 A key scene in the Oscar-nominated film Roma is set against the backdrop of a real life-massacre in Mexico. Sputnik looks at an era in which US-trained operatives killed and tortured hundreds of opponents of the Mexican government.

On Tuesday, January 22, Roma – which is named after Mexico City’s Roma Sur neighbourhood where it is set – was nominated for 10 Academy Awards, including one for actress Yalitza Aparicio, who plays Cleo, a Mixtec maid who works for a middle class family.

In one scene a heavily pregnant Aparicio gives birth in a department store as sinister paramilitary figures chase after and kill protesting students.

#2019oscars
Personal emotions intersect with national ones in “#Roma,” the #Mexican writer-director Alfonso Cuarón’s interpretation of his 1970s childhood. In this scene, the pregnant protagonist, Cleo (Yalitza Aparicio), goes to a furniture store to shop for a crib. On her way, pic.twitter.com/csVW45OqkE

​Roma — which is also up for the Best Foreign Language Film Oscar — is set in Mexico City in the era when director Alfonso Cuaron was growing up and that scene is set during the so-called Corpus Christi massacre, which was carried out by a CIA-trained black ops group.

On 22 June 1971 shadowy figures from a US-trained group called Los Halcones (The Falcons) murdered up to 120 people who had been demonstrating for university reform.

Cuaron's film, funded by Netflix, is shot in black-and-white with dialogue in Spanish and the indigenous Mexican Mixtec language and is dedicated to a nanny who looked after him when he was a child.

Don't Expect CIA to be Mentioned in Oscars Speech

The film would be the first Netflix-made Oscar winner.

Cuaron, 57, is also nominated for Best Director but if he wins at the glitzy ceremony in Hollywood on 24 February do not expect him to dwell on the political context against which the film is set, which does not show the United States in a good light.

​Nowadays Mexico is a stridently independent nation with a flourishing economy but in the 1960s and 1970s it was a very different place and was politically dominated by the US.

Between 1929 (under a previous name) and 2000 — when it lost power when Vicente Fox was elected President — Mexico was ruled by successive governments of the Institutional Revolutionary Party (PRI).

Was PRI the 'Perfect Dictatorship'?

The writer Mario Vargas Llosa once described it as "the perfect dictatorship".

Elections were frequently rigged but the PRI — which started out as a fairly secular and left-wing party — remained in power and the US rarely if ever criticised the Mexican government.

The "Mexican miracle" of economic growth, largely fuelled by the discovery and production of oil, had dragged the country out of poverty and the US was keen to import cheap oil and provide ample export opportunities for its big manufacturers.

​After Castro took power in Cuba, the US became neurotic about the communist threat in Latin America and in the mid-1960s the CIA secretly trained Mexican forces, known as Los Halcones (The Falcons) in black ops so they could keep a lid on any dissent.

In the summer of 1968 university students and young people in France, Britain, the United States and many other countries took part in massive demonstrations against the Vietnam war, against the way universities were run and against governments in general.

Students in Mexico were no different and things came to a head on 2 October 1968 when around 10,000 gathered in the Plaza de las Tres Culturas in the Tlatelolco district of Mexico City.

It was only 10 days before the opening ceremony of the Olympic Games in Mexico City — which had cost Mexicans $150 million, a cost that was resented by many of the students.

The government claimed the protesters fired on the security forces first, something which was later discredited.

Around 300 activists were killed in what became known as the Tlatelolco massacre, although the official death toll was only 44.

The Tlatelolco massacre was the killing of students and civilians by military and police on October 2, 1968, in the Plaza de las Tres Culturas in the Tlatelolco section of Mexico City, when the government used its forces to suppress political opposition. #2deOctubeNoSeOlvida pic.twitter.com/L2hWGjaS5N

​Two years later, in 1970, Echeverria was elected as President. He claimed to be a liberal but he was of course the PRI's candidate and he officially polled 11 million votes to just a million for his opponent.

The Mexican economic miracle was running out of steam and there were more and more protests by students and other young people.

The trigger had been an arcane dispute over the budget at the University of Nuevo Leon. Thousands of students decided to mount a march in support of their comrades in Mexico City on 10 June 1971.

​The marchers were hemmed in by riot police, who suddenly parted and allowed the Halcones — dressed in civilian clothes — to sweep in and attack the students, armed with wooden and bamboo sticks.

Bravely, the students repelled this initial assault but the Halcones returned, this time with guns, and began hunting down the students, who tried to hide in shops and people's homes.

Around 120 people were killed, including a 14-year-old boy.

Halcones Were Mixture of Criminals and Sons of PRI Supporters

Some of the Halcones were criminals, who had been freed from jail by the authorities on condition that they helped put down uprisings.

But the US State Department's Bureau of Intelligence and Research (INR) prepared an internal analysis of the massacre and the Halcones.

"A clandestine report, however, indicates that the Halcones' membership is recruited from university age students who are sons of people friendly with PRI officials enjoying the personal confidence of President Echeverria. The recruits are given some university education plus some pay and the assurance of a bright future in the PRI. They are trained by army personnel and have been supplied with close to $200,000 worth of weapons and equipment, including 100 M-1 carbines," said the INR report.

Oh boy, is this the Corpus Christi massacre outside?!?!?! #Roma

​Roma is not the first film which has featured the Corpus Christi massacre.

In 1992 in the film El Bulto (The Lump) Gabriel Retes played a photojournalist who wakes up 20 years after being beaten up by the Halcones and left in a coma.

The events of the Tlatelolco and Corpus Christi massacres have largely been buried over the years.

When Vicente Fox became president in 2000 he ordered a fresh report into the Tlatelolco massacre.

​The PRI lost power in 2000 and was out of government until 2012, when Enrique Peña Nieto was elected, promising a "new way of governing."

"There will be no pact nor truce with organised crime," Peña Nieto told cheering crowds.

Earlier this month a witness at the trial of Mexican drug lord Joaquin Guzman, better known as El Chapo, said Peña Nieto had been given a $100 million bribe by El Chapo's cartel.

In November's presidential election the PRI was punished for the unpopularity of Peña Nieto's government — its candidate José Antonio Meade received only 16.4 percent of the votes, trailing in third as left-winger Andrés Manuel López Obrador (AMLO) became President.

Nobody has ever been brought to justice for the killings in the Tlatelolco and Corpus Christi massacres but a small band of human rights activists continue to investigate the deaths.

In 2009, after a lengthy legal saga, Echeverria was exonerated of all charges regarding the Tlatelolco massacre.