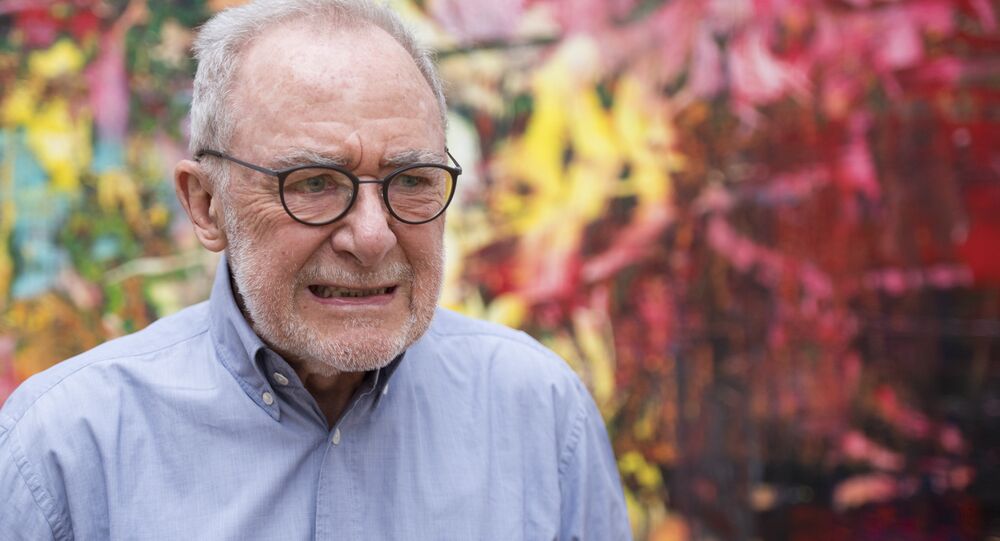 A movie based on the life of German modern art legend Gerhard Richter has been nominated for Best Foreign Language Film. Sputnik spoke to writer and art historian, John-Paul Stonard, about Richter and the film.

Never Look Away was one of five non-English films nominated for an Oscar on Tuesday, 22 January.

Although the central character in the film — known in Germany as Werk Ohne Autor (Work Without Author) — is called Kurt Barnert, it is clearly based on Gerhard Richter.

Richter was born in Dresden the year before Hitler came to power and after the war he was an art student in communist East Germany.

After some initial success Richter, feeling restricted by the East German system, defected to the West and went on to become one of the greatest painters of modern art in the 20th century.

John-Paul Stonard, a writer and art historian, said Richter was "right up there with Picasso and Kandinsky" and had "reinvented painting" in his lifetime.

"He was the most important painter of the second half of the 20th century. All painting now is in some way indebted to him, as it was when he was growing up to Picasso. But they could not be more different as personalities and as artists," Mr. Stonard told Sputnik.

An exhibition of Richter's work was shown at the Tate Modern in London in 2011.

© AP Photo
Employees at Sotheby's in New York hang a 1968 painting by Gerhard Richter, of the cathedral square in Milan
An exhibition o

Mr. Stonard said at the time Richter's work "encompassed elements of his private life — marriage, divorce, fatherhood — alongside reflections on the ongoing traumas of national history, from German political violence in the 1970s to international terrorism in the 21st century.

One of his most famous works, entitled Man Shot Down, is based on a photograph of the notorious left-wing German terrorist Andreas Baader, who supposedly shot himself in Stammheim prison in 1977 after smuggling a gun into his cell, although conspiracy theorists still insist he was murdered.

Richter's abstract paintings are highly sought after — one was sold for £30.4 million at Sotheby's in London in 2015, a record for a living European artist.

Richter once said the art market is "as incomprehensible as Chinese physics", although he does not complain at the amounts paid for his work, which have made him a very wealthy man.

Now 86, Richter told the German DPA news agency he had not seen the film but he found the trailer "too thriller-like" and told The New Yorker he had told Florian Henckel von Donnersmarck he did not approve of his life being turned into a movie.

"I can't imagine that Richter was very welcoming of the film — why would he be?" Mr. Stonard told Sputnik.

Mr. Stonard said it had got fairly mixed reviews.

"It is an engaging film, as long as you don't confuse it with any sort of reality. The characterisation and settings are all very well done, and the historical survey is impressive. The story is not always believable, for example the idea that Richter solves a family mystery through painting. Although the film shows the move to the more sophisticated West, you get the impression of watching something more like Socialist Realism, with all the over-done drama and emotion — kitsch," Mr. Stonard told Sputnik.

Never Look Away is not the only film about an artist to be nominated for an Oscar.

The Artists Who Have Been Depicted on the Big Screen

Willem Defoe's depiction of Van Gogh in At Eternity's Gate is also nominated for a Best Actor Oscar.

Timothy Spall was nominated for Best Actor at the 2015 Oscars in Mr Turner, about the eponymous British artist, Ed Harris played Jackson Pollock in a 2000 film, Colin Firth played Vermeer in Girl With A Pearl Earring in 2003 and Anthony Hopkins portrayed the Spanish artist in Surviving Picasso in 1996.

But do any of them do justice to the artist and his art?

"I don't think it is an impossible task. Providing insight into an artist's life and work is more or less well done in the cinema. Both the Pollock and Turner films were excellent in this respect," Mr. Stonard told Sputnik.

"But the cinema will never be able to rival the depth of perception that you can get with the written word — with biographies and monographs about artist's work. The best book on Richter's work is one he wrote himself — the most recent edition of his collected writings. Really fascinating," Mr. Stonard told Sputnik.