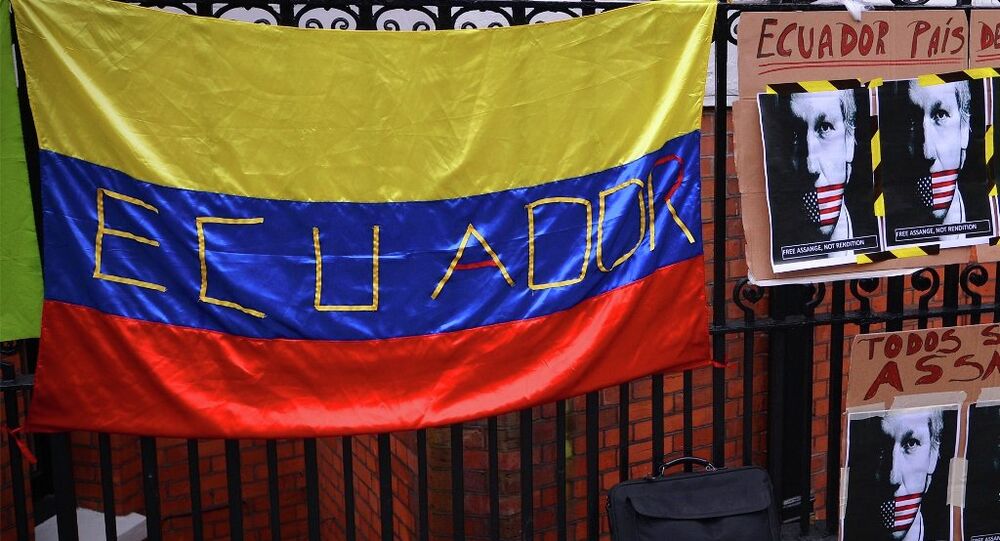 "Ecuador has received written guarantees from the UK authorities on [Assange’s] safety but the [Ecuadorian] government cannot do more than that," Salvador said as quoted by the Republica news outlet.

© REUTERS / Daniel Tapia
WikiLeaks Lambasts UK Media Over Attempt to Cover Up Assange's Extradition to US
Salvador recalled that the Ecuadorian authorities had received guarantees from London that Assange would not be extradited to a third country where he might be put on a death row.

The prosecutor general noted there were two options for the whistleblower. Assange can either remain inside the Ecuadorian embassy for "six or more years" or can surrender to the UK authorities, undergo trial and endure his punishment for breaking bail conditions, according to the prosecutor general.

On Wednesday, an Ecuadorian court held a hearing into an appeal, lodged by Assange’s defence, against the court ruling against annulling home rules being imposed on Assange by the Ecuadorian authorities inside the embassy.

According to Assange’s lawyer Carlos Poveda, a ruling on Wednesday's hearing will be issued in the course of eight business days.

© REUTERS / Peter Nicholls
Assange's Lawyer Rejects Moreno's Deal to Leave Ecuadorian Embassy in UK
Over the past months, Assange has faced restrictions on his communications and other actions inside the embassy, where he has been living since 2012 after received asylum in Ecuador.

The whistleblower’s lawyers have called his living conditions inside the diplomatic mission a violation of human rights and unsuccessfully challenged the restrictions in October.

Assange has suggested he might be extradited to the United States, where he is wanted over publishing thousands of classified materials, if he leaves the embassy.

In November, WikiLeaks suggested that the US authorities might have brought sealed charges against Assange, citing a filing in an unrelated case that used Assange's name in an "apparent cut-and-paste error."