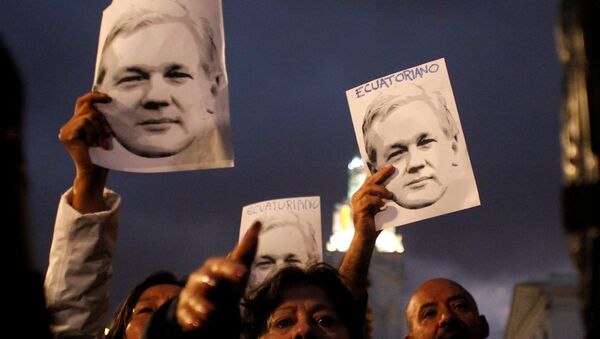 A leading British newspaper claimed late November that Trump's campaign and Moscow had sought to discredit Hillary Clinton in the 2016 election by leaking her hacked emails via WikiLeaks. Both Trump's former campaign manager Manafort and WikiLeaks have dismissed the allegations and threatened to sue the paper for libel.

A recent bombshell report in The Guardian about a series of secret meetings between Trump's former aide Paul Manafort and Julian Assange in the Ecuadorian embassy has made waves both in the UK and the US, while also increasing fears that so-called "Russian meddling" had secured Trump's 2016 presidential election victory.

However, the story has met a number of critics, including leading reporters, who believe that the article in the The Guardian is an example of journalistic malpractice. WikiLeaks spokesman Kristinn Hrafnsson writes in an op-ed piece for Newsweek that it gives London and Quito "political cover to arrest Assange and for the US to extradite him. Any journalists worth their salt should be investigating who is involved in these plots."

The Guardian claimed, citing anonymous intelligence officials, that the list of Assange's visitors also included the mysterious "Russians" apart from Manafort. It hinted that the talks could be connected with the Democratic emails allegedly stolen by Russian hackers and dumped by WikiLeaks during the 2016 presidential campaign.

Jonathan Cook, a former Guardian reporter, contends that the story "provides a stronger foundation" for the Russiagate narrative. "In truth," he says, "there is no public evidence that the emails were hacked, or that Russia was involved. Central actors have suggested instead that the emails were leaked from within the Democratic Party."

"The propaganda function of the piece is patent. It is intended to provide evidence for long-standing allegations that Assange conspired with Trump, and Trump's supposed backers in the Kremlin, to damage Hillary Clinton during the 2016 presidential race."

Cook goes on to say that the Guardian story will soften up public opinion ahead of the UK's highly expected push for Assange's arrest and extradition to the United States. "And it will pave the way for the US legal system to lock Assange up for a very long time," he adds.

No Evidence of Manafort-Assange Talks

Glenn Greenwald, a former Pulitzer-winning Guardian journalist, suggests that the paper has "such a pervasive and unprofessionally personal hatred for Julian Assange that it has frequently dispensed with all journalistic standards in order to malign him."

A number of critics point out that the story could not be corroborated by the embassy's visitor logs; no shots of Manafort visiting Assange have been provided either, despite 24/7 surveillance inside the building.

Greenwald believes that the Manafort-Assange connection could be easily proven by the embassy's security: "If Paul Manafort visited Assange at the Embassy, there would be ample amounts of video and other photographic proof demonstrating that this happened. The Guardian provides none of that."

Craig Murray, a UK ambassador-turned-activist, also underlines that no one can be admitted into the embassy without being registered in the visitor logs. He claims that the report is a "fake document" channeled by Ecuadorian President Moreno to "Mi6 mouthpiece" Luke Harding, who authored the report.

"I would love to believe that the fact Julian has never met Manafort is bound to be established. But I fear that state control of propaganda may be such that this massive 'Big Lie' will come to enter public consciousness in the same way as the non-existent Russian hack of the DNC servers."

Both Manafort and Assange adamantly opposed the integrity of the story; the latter has threatened to seek legal retaliation against The Guardian. WikiLeaks called the story a "fabrication" and said that it was willing to bet the newspaper a million dollars and "its editor's head" that the two had never met.

Remember this day when the Guardian permitted a serial fabricator to totally destroy the paper's reputation. @WikiLeaks is willing to bet the Guardian a million dollars and its editor's head that Manafort never met Assange. https://t.co/R2Qn6rLQjn

The Guardian then toned down its reporting with minor edits, albeit without any retraction or even notification. The newspaper, however, stood by its story, maintaining that it "relied on a number of sources".

Assange's lawyer in Ecuador, Carlos Poveda, told Sputnik that his client was ready to turn himself in to UK officials if London guaranteed that he would not be extradited to the US or elsewhere.

Over the past several months, the Ecuadorian authorities have been putting various restrictions on the conditions of Assange's stay in the embassy, including on personal visits and internet access, which his defence has called a violation of his human rights.

Julian Assange has been locked up in the Ecuadorian embassy since 2012, when he asked for asylum after Britain requested his extradition to Sweden over allegations of sexual assault. The whistle-blower has repeatedly suggested he might be apprehended outside the embassy and extradited to the United States over massive dumps of classified data on US-led wars and CIA activities by WikiLeaks.