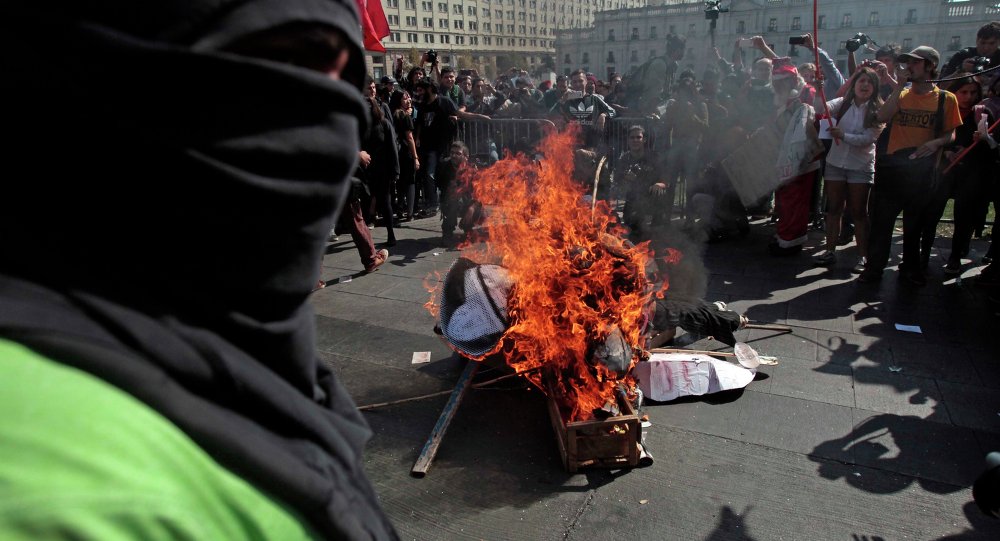 Seven police officers and several protesters were injured and 134 more were arrested after a peaceful demonstration in Chile turned violent.

Under the slogan "Chile Decides Its Education," around 150,000 Chileans took to the streets on Thursday, calling for educational reforms and protesting government corruption scandals, said organizers. Police claim only 20,000 were at the rally.

The march was peaceful until a small group of hooded protesters threw rocks and gasoline bombs at police, the Associated Press reported. Riot police pushed back, using water cannons and tear gas, while demonstrators banged on the windows of armored vans.

The protest comes after President Michelle Bachelet’s administration vowed to pass a bill for free university education. Students walked past the presidential palace, demanding a greater say in the law, amid concerns that the government would backtrack on its promises as costs escalate.

"It is not clear whether the high expectations of students will be fulfilled," Diego Vela, a director at Education 2020, an organization that promotes greater equality in education told Bloomberg. "The money from the tax reform originally committed for education won’t be enough to finance all the reforms."

Students also took to the streets in response to recent corruption allegations, stating that some companies have been using fake receipts to finance political campaigns and evade taxes while the government struggles to fund education.

Out of $8.3 billion in tax increases, only $5 billion was reserved for education, most of which has been allotted, leaving nothing for higher education, said Vela.