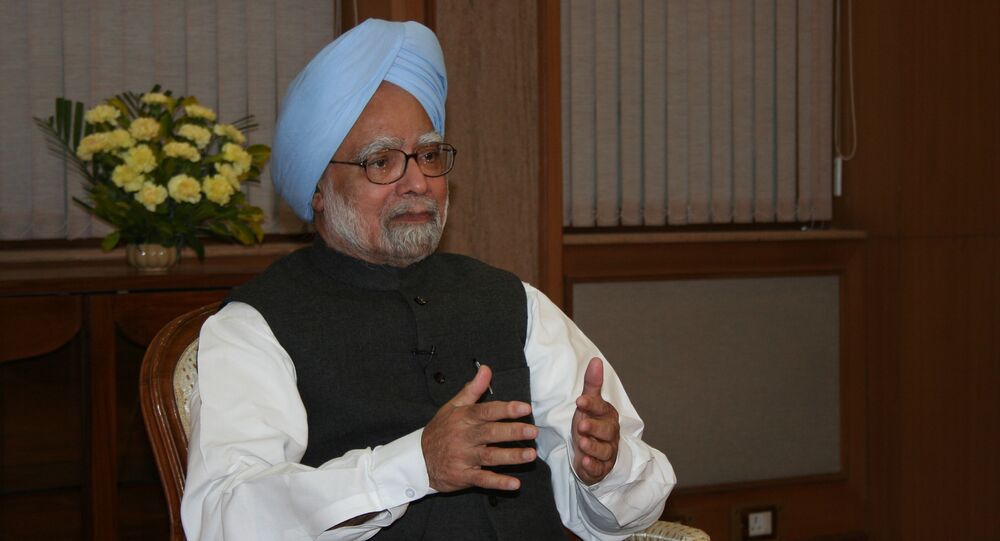 Controversy of Indian Film 'The Accidental Prime Minister' is Not Accidental

The film is touted to be the ruling Bharatiya Janata Party's masterstroke against the National Congress, India's main opposition party. The party has been left seething, as the film portrays leader Rahul Gandhi and his family in a negative light. The director of the film in an interview with Sputnik said, “It’s an authentic political film.”

The film is directed by debutant Vijay Ratnakar Gutte, and notable Bollywood actor Anupam Kher is playing the role of Dr. Manmohan Singh, while Akshaye Khanna is portraying Sanjaya Baru, who is also the movie's narrator.

Sputnik spoke to Vijay Gutte about the controversy caused by the film and his experience of directing a political melodrama.

Sputnik: The film is very important for you as it is your maiden effort as a director. But the film has proven controversial from the very beginning. In fact, the book courted controversy when it was published and so too now the film. What are your views on this?

© REUTERS / Anindito Mukherjee
Another One? Rahul Gandhi Becomes New Leader of the Indian National Congress
Vijay Gutte: Yes, there were lots of controversies when the book was launched, therefore when I started to make a film I thought that things would good smoothly as all related controversies had happened and were done with during and after the launch of the book. I believed the film would be free from controversies. I never imagined that a bomb will explode again to engulf the film as it had with the book.

Although I suspected that there could be a controversy related to names, as we are using real names for the first time, I took that as a positive thing. I thought this would make the film different, some new genre will see the light of day.

Sputnik: Don't you think that the recent controversy is mainly due to India's upcoming elections this year? Apprehensions are that the film could tarnish the image of one party while benefiting another.

Vijay Gutte: My film is very entertaining and there is nothing sensational about it.

In fact, people already know what is in the film. It's basically a friendship between two persons as [a] political scenario unravels in the background.

Sputnik: In fact, the prime minister's office (PMO) raised some concerns when the book was released and despite that, you decided to direct the film.

Vijay Gutte: The statement issued by the PMO never mentioned that one should not read the book or that the book should be banned. PMO just expressed its viewpoint and nothing more.

Sputnik: Have you put some Bollywood masala (spicy mix) in it?

© Sputnik / Russian Presidential Press Office
Indian Election: Congress Party’s Rise in Modi’s Bastion Makes BJP Sweat Despite Victory
Vijay Gutte: It's basically a non-fiction book. When we bought the rights to make this into a film and when I met with author Sanjaya Baru, he asked us to adhere to the book and make a responsible film as it would be a film about the PMO and our country. So I have done the film adaptation of the book responsibly.

I did not put Bollywood masala in it. There is dramatisation but I didn't touch the content. The content is the key and core of the film.

Sputnik: Anupam Kher, the actor who played the role of Manmohan Singh, has BJP leanings and is considered to be a fan of Modi. Even Akshay Khanna is seen as a BJP supporter. You yourself are also aligned to Modi's BJP. Don't you think that when a team with BJP leanings makes a film based on the life of former Prime Minister Manmohan Singh from the principal opposition party, it would almost certainly attract criticism?

Vijay Gutte: No, we never thought about it. After finalising the script we unanimously decided there could be no one better than Anupam Kher for the role of Manmohan Singh. Although Anupam Kher has BJP leanings, that's his personal matter. In fact, if you see the film then you will realise that no one could have better played the role of  former Prime Minister Manmohan Singh as Anupam Kher.

It's an authentic political film.

© Sputnik / Sergey Guneev
Global Index Show India’s Trust in Modi Slipping Slightly Ahead of Election Year
Sputnik: Do you think that the controversy surrounding the film will help it at the box office. Further, will people also watch this movie as elections are around the corner?

Vijay Gutte: That's natural and this is the best time for the producer to release the film. In fact, we are taking the controversies in stride.

Sputnik: There is also controversy related to trailer of the film — it suddenly it vanished from YouTube.  Do you think there could be a political conspiracy against your film?

Vijay Gutte: This has happened for the first time. I don't know whether it's a technical glitch or someone has done something intentionally.

I have therefore put all controversies behind me and am looking forward to my film. I wish to convey to your readers that people must watch the movie, which is both entertaining and interesting.

The views and opinions expressed by speaker in this article are those of the speaker and do not necessarily reflect the position of Sputnik.

Facebook to Have Provisions for Monitoring Political Ads in India