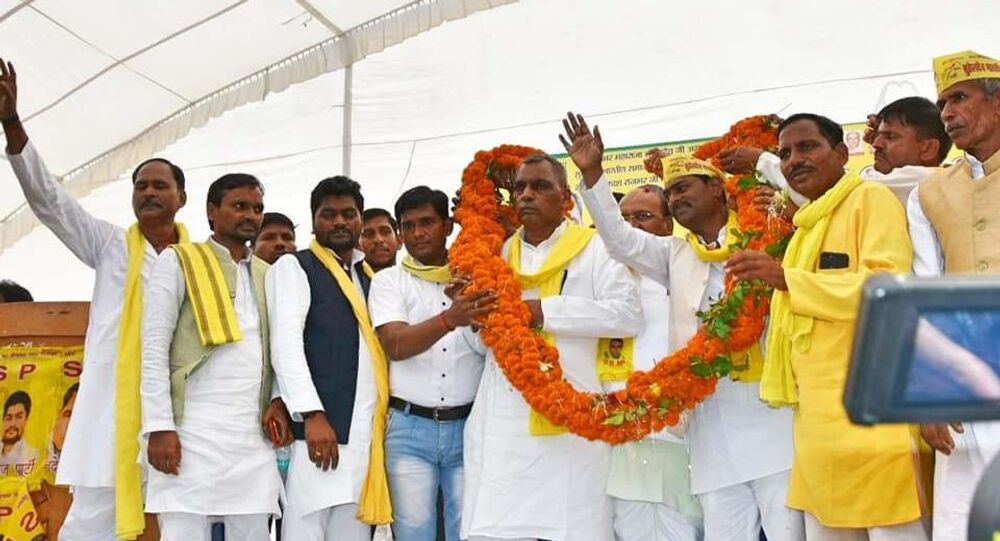 Suheldev Bharatiya Samaj Party (SBSP) President Om Prakash Rajbhar – who is also the leader of the Backward Class community – has now become a prominent critic of the state government. The former minister in the Yogi Adityanath-led Uttar Pradesh government spoke to Sputnik.

Sputnik: Tell us about your strategy for the upcoming Uttar Pradesh Assembly elections...

Om Prakash Rajbhar: We have formed an alliance of ten regional parties under the name Bhagidari Sankalp Morcha comprising the like of the Suheldev Bharatiya Samaj Party and Asaduddin Owaisi’s All India Majlis-e-Ittehadul Muslimeen (AIMIM).

Several rallies have been held under the Morcha in different districts of the state including Ballia and Prayagraj.

We have promised the people that if we come to power we will provide free electricity for domestic use, ensure free treatment for the economically weaker section of the society and mandate quality education in government schools on par with private schools. The standard of education is different in government schools and private schools. The Right to Education Act exists but still, around 60 percent of people are illiterate. The government is not serious about providing education to all. There should be stringent laws and strict punishment for those who are not sending their children to schools.

We will also ban liquor in the state. If it can be banned in states like Gujarat and Bihar, then why not in Uttar Pradesh.

Sputnik: Do you think any of the ten parties will clash?

Sputnik: You were the cabinet minister in the Yogi Adityanath government in the state. What are the reasons for breaking from the BJP?

I term it the Bharatiya Jhoothi (Liar) Party because Prime Minister Narendra Modi is the biggest liar. He said that he sold tea at the station but nobody knows when. He said that INR 1.5 million ($20,244) will be deposited in the bank account of every citizen of India but it never happened. He also promised to provide employment to 20 million people every year but instead of that, more than 100 million people have lost their jobs.

Sputnik: You have refused to ally with the BJP, so will you go with the Samajwadi Party or Congress?

Om Prakash Rajbhar: No party in the state will get a majority in the 2022 state elections. The Bharatiya Janata Party will be the largest party followed by the Samajwadi Party, Bahujan Samaj Party, and Congress. So, to restrict the BJP from making the government in the state we are ready to form an alliance with any other party only if they agree to our demands.

Sputnik: The BJP has started talking to the allies in the state. Do you think it will be able to satisfy all of the small parties?

Om Prakash Rajbhar: The BJP is a sinking ship in Uttar Pradesh. So, anyone who will go with it, will sink eventually. People have now understood the functioning of the party. They make false promises before the elections but after that, they don’t even talk about it.

Sputnik: The Samajwadi Party and Aam Aadmi Party have accused the Ram Janmabhoomi Trust of a land scam. What's your take on this?

Om Prakash Rajbhar: I would like to say that if Sanjay Singh of Aam Aadmi Party and Pawan Pandey from the Samajwadi Party are lying about the land deal, why is the government not filing a case against them? Why is the government not ordering an inquiry by the Central Bureau of Investigation (CBI) or Enforcement Directorate (ED)?