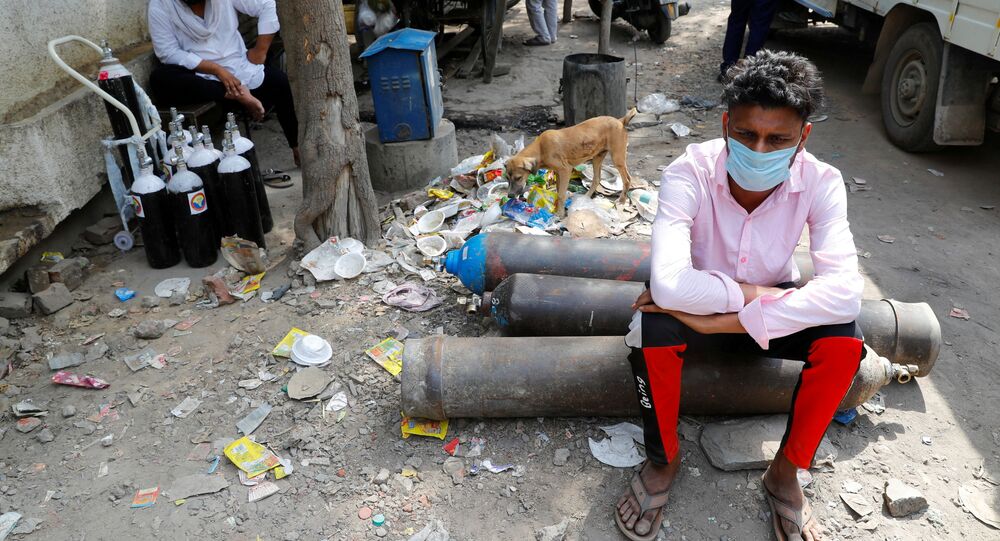 The Indian government, led by Prime Minister Narendra Modi, has come under major fire both at home and abroad since India’s COVID-19 situation plummeted this month. The second wave of the pandemic is resulting in more than 300,000 new cases each day in India, which prompted the IT ministry to ask Twitter to remove some posts seeking help.

India’s Supreme Court ruled on Friday that state governments and police officials must not clamp down on people reaching out on social media for help regarding COVID-19 emergencies.

Presiding over the bench was Justice Dhananjaya Yeshwant Chandrachud, joined by Justices Lavu Nageswara Rao and Shripathi Ravindra Bhat, who said that if the state or police interfere with any forums for those needing advice, any such action will be treated as being in contempt of court.

© CC0 / Pixelkult
India Urges Social Media Platforms to Take Down Posts Spreading Fake COVID-19 Info
"We want to make it very clear that if citizens communicate their grievance on social media and internet then it cannot be said it's wrong information. We don't want any clampdown of information. We will treat it as a contempt of court if such grievance is considered for action. Let a strong message go to all the states and [district generals of police] of states,” the court said.

BREAKING : Supreme Court flags the issue of threat of coercive action against people putting SOS calls on social media.
"We want to make it very clear that if citizens communicate their grievance on social media and internet then it cannot be said its wrong information", SC says.

A section of netizens on social media have described the court ruling as a “ray of hope” and a “tight slap” to state chief of Uttar Pradesh, Yogi Adityanath, who earlier this week claimed that his state did not have a shortage of oxygen and threatened to seize the belongings of people who took to Twitter to complain about shortages, calling their worries “fake news”.

Last Hope 🙏
"Do Not Clamp Down Citizens' SOS Calls For Medical Help Through #SocialMedia":Supreme Court Warns Of Contempt Action Against States, Police .

In all these desperate situations, govt has the energy to do all this. 😥 pic.twitter.com/ivBzJCYr3R

​In accordance with instructions from Adityanath, Uttar Pradesh police recently arrested and prosecuted a man named Shashank Yadav who went on Twitter to try to find oxygen for his dying grandfather. Police claimed that Yadav was trying to spread alarm about the unavailability of oxygen in the State's Amethi district.

The news of Yadav’s arrest shocked many Indians and led to an avalanche of those in need appearing on social media to confirm that Uttar Pradesh, along with other parts of the country, is indeed facing a medical crisis because of the surge in cases.

Angry and helpless, some even challenged Adityanath to arrest them outside the hospitals in Uttar Pradesh's cities because they claimed there was no oxygen in the hospitals and treatments were not being done properly.

​On 25 April, India's Ministry of Information Technology (MeITY) asked social media platforms to take down at least 100 posts, claiming them to be spreading false information about the severity of COVID-19 in the country, sources from MeITY told India's media. The move was reportedly recommended by of the Indian Ministry of Home Affairs.

The Indian government has been blaming social media for false information campaigns and creating panic, as well as spreading rumours against domestically developed vaccines.

On the other hand, the COVID-19 statistics tell a different tale: India on Friday reported a new daily record as cases surged to a massive 386,452, according to the Health Ministry. The total number of cases has exceeded 18.7 million (18,762,976) and the death toll from the virus has reached 208,330. India now has nearly 3.2 million active cases.

Delhi is running out of wood to cremate those who have died of COVID-19. Parking lots in the national capital region (NCR) are being converted to crematoriums, each of which is witnessing up to 90 funerals a day.

Some Indians are also questioning Prime Minister Modi’s vision of a "self-reliant India" when other countries, including Germany, the UK, Saudi Arabia, the UAE, Pakistan, and Bhutan are rushing necessary supplies to India.