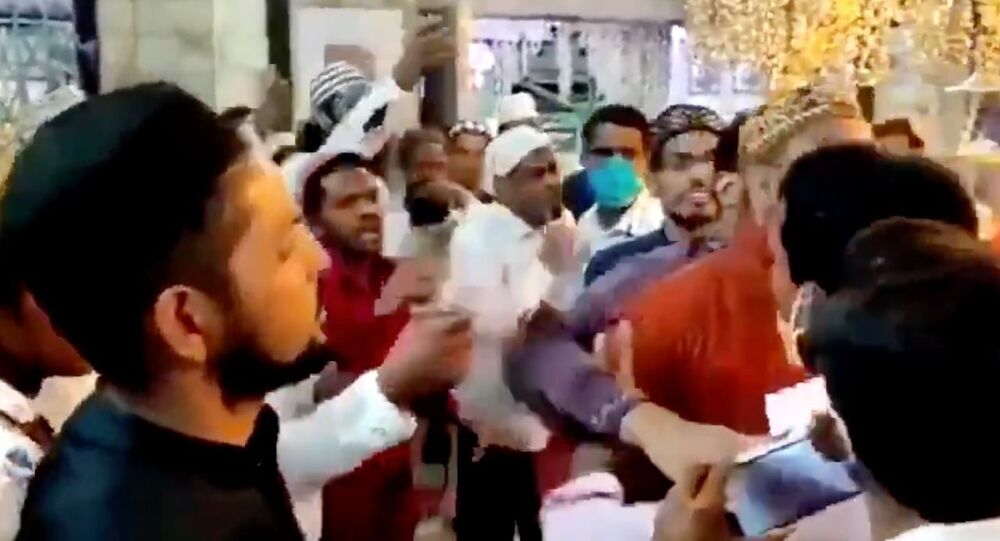 An ancient shrine in the Indian state of Maharashtra is drawing attention after a Muslim mob disrupted an annual Hindu tradition being carried out by members of the Hindu organisation Bajrang Dal. The religious structure is currently administered as a Sufi shrine, but Hindu groups claim it was originally the resting place of a revered Hindu saint.

Communal tension is brewing in the Indian state of Maharashtra days after a Muslim mob disrupted Hindu rituals at a shrine claimed by both Hindus and Muslims.

India's top Hindu outfit Vishwa Hindu Parishad (VHP) on Wednesday said it is lending its "full weight" to a campaign to "take back" an ancient Sufi shrine in Maharashtra from Muslims.

"It is the resting place of Hindu saint Machindranath. It was usurped by Muslims during the Mughal rule in India after the 16th century. The local Hindus and even those from other parts of the country know the importance of the place", VHP national spokesperson Vinod Bansal told Sputnik on Wednesday.

Bansal says that activists from Bajrang Dal, VHP's youth wing, were holding prayers at the shrine on 28 March on the eve of Holi, when a Muslim mob disrupted it.

"We had sought permission from police and we were strictly following the COVID-rules that had been in place. The Bajrang Dal has been holding annual prayers at Holi at the shrine for years now to continue with the Hindu tradition", the VHP leader said.

While many Hindus claim the religious site is dedicated to their saint Machindranath, Muslims believe it is the shrine of Sufi saint Fakir Haji Abdul Rahman Shah Malang aka Malang Baba.

The Muslim community claims the saint came from Yemen in the 13th century and set up the shrine.

Bansal, on the other hand, says that it was the resting place of Hindu saint Machindranath before the Sufi saint "took control" of it.

In a settlement of sorts, Hindus and Muslims agreed to share the place, with Hindus reportedly performing prayers on the occasion of "Poornima" (the night of the full Moon) every month.

Traditionally, the Shrine Board has comprised members from both the Hindu and Muslim communities.

A profile of the shrine in the Indian publication Tehelka in 2018 described it as an epitome of Hindu-Muslim unity, noting that thousands of devotees cutting across religious lines visit the hilltop structure to pay their obeisance to Malang Baba.

According to local police, the incident occurred after a group of around 50-60 Muslims stormed the religious structure as they heckled Hindu devotees performing an annual ritual inside the shrine.

"We have arrested people from both sides. The Muslims barged into the religious structure and tried to stop the Hindus. We are looking into the matter and are on high alert to thwart any untoward incident", M.M. Khandare, senior police inspector at the Hill Line Police Station in Maharashtra, told Sputnik.

He says that even though Bajrang Dal activists had sought permission from police before performing the annual prayers, they were found flouting the COVID rules by not following the restrictions on the size of the congregating people.

Bansal has disputed the police's version of events, stating that Bajrang Dal activists were complying with all of the rules.

Meanwhile, Indian social media is abuzz with opinions in the wake of the 28 March incident, which was first reported by the Marathi-language daily Saamna, the mouthpiece of the state's ruling party Shiv Sena.

While some netizens supported the idea of "taking back" the place from Muslims, others accused Hindu outfits of creating a Hindu-Muslim conflict over the shrine's ownership.

Omg 😳 now this !!! @mybmc @OfficeofUT Please save us from communal clashes 🙏 control BJP goons! Haji malang dargah is ancient and both communities pray there since long ! https://t.co/qDqMR3Njgc