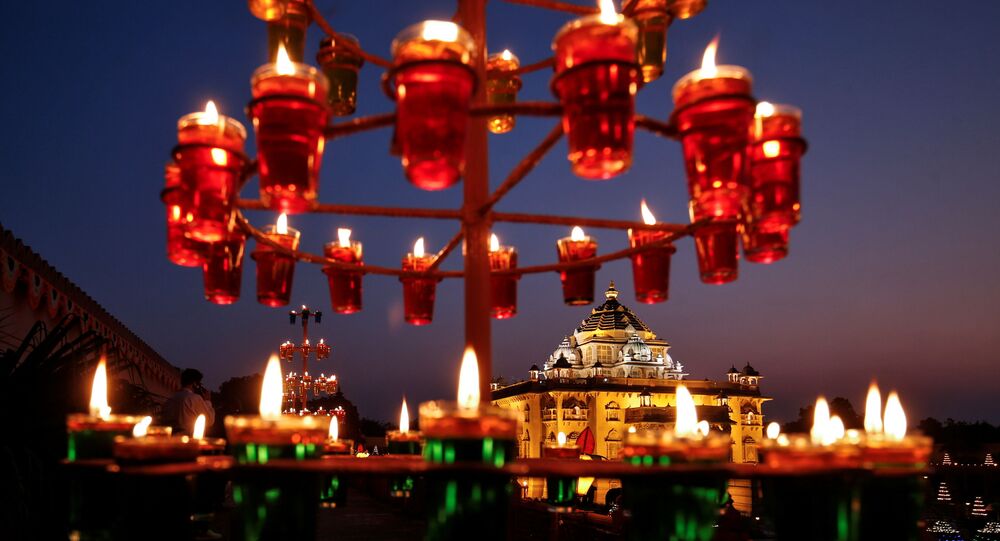 The Hindu festival of Diwali marks the mythological homecoming of Lord Rama after 14 years in exile. Among some Hindus in the southern states, Diwali is celebrated to mark the killing of mythological demon Naraksura by Lord Krishna, another Hindu god.

Diwali, perhaps the best-known Hindu festival, is celebrated annually by people of all faiths in India, a country known for its cultural and religious diversity. But this time, a group of Dalits (scheduled castes once known as "untouchables") has decided to boycott this festival's celebrations.

India’s 200 million-strong Dalit community is an “integral part” of Hindu religion and attempts to “misguide” them will trigger a strong backlash from the country's Hindus, top religious organisation Vishwa Hindu Parishad (VHP) has told Sputnik.

“Those who are trying to divide the Hindu religion on Diwali will face a strong response from the Hindus. Diwali is the festival of every Indian,” said Vinod Bansal, the national spokesperson of VHP.

The VHP is an ideological ally of the governing Bharatiya Janata Party (BJP) and allegedly played a prominent role in the demolition of Babri mosque in the Indian city of Ayodhya in 1992.

“Everyone knows that the opposition is trying to whip up artificial fears in the minds of the Dalit population. The Dalits have remained socially and economically backward despite the Congress party staying in power for 70 years,” remarked Bansal.

Citing the Hindu epic Ramayana, the VHP official further remarked on the role of the sage Valmiki, who had originally composed Ramayana, in the Hindu god Lord Rama’s victory over the mythological demon King Ravana. Diwali is celebrated annually by Hindus also to mark the victory of Rama over demon King Ravana, which has been documented in the Ramayana.

Composed between 500 to 100 BC, Valmiki is thought of as an ancestor by many members of India’s Scheduled Castes/Scheduled Tribes (SC/ST) community.

“Diwali is incomplete without the participation of Dalits, Valmikis,” Bansal stressed.

© Sputnik / Shweta Sharma
Pandemic Blues: Flagging Sales Rob Potters & Clay Lamp Craftsmen of Diwali's Lustre
The VHP leader's remarks came in response to calls by several Dalit outfits in the country to boycott the Diwali festivities this year as a symbol of protest against rising cases of violence against members of India’s Scheduled Caste (SC) and Scheduled Tribe (ST) communities.

In ancient Hindu religious texts, Dalits are classified as people belonging to the lowest layer of society.

Critics of the Indian caste system blame the nationalist Hindu organisation Rashtriya Swayamsewak Sangh (RSS), the ideological mentor of the ruling BJP, for further promoting the caste system in the country in recent times, especially after Prime Minister Narendra Modi first came to power in 2014.

Dalits, an Integral Part of Hinduism

An umbrella group of Dalit and allied outfits earlier this week had issued a call to boycott the Diwali festivities. Spearheaded by the Landless Conflict Committee, the appeal is in response to increasing instances of “harassment, exploitation and starvation” among Dalits.

“Apart from unemployment and the exploitation of Dalits, the women in the community are facing unprecedented sexual crimes from supporters of the ruling party,” Delhi State Legislator Jaikishan, from the main opposition Congress party, told Sputnik.

“Be it the Hathras gang-rape incident or many others, the Dalits are not being treated equally by the BJP and its supporters,” he complained, referring to the sexual assault and subsequent death of a 19-year-old girl allegedly raped by four upper-caste men in Uttar Pradesh in September.

© AFP 2020 / SAM PANTHAKY
Casteists in BJP Think It’s Okay to Rape Dalits, Bhim Army’s Chief Says on Hathras Case
The incident triggered protests across the country, with the opposition accusing the BJP of a cover-up to shield the accused since they hailed from the upper-caste. All the accused, however, were arrested.

‘Why Should Dalits Celebrate Diwali’

Professor Kancha Ilaiah, an anti-caste activist and the Director of the Centre for Social Exclusion and Inclusive Policy at Hyderabad-based Maulana Azad National Urdu University (MANUU), opined the Hindus must “wholeheartedly” accept Dalits as part of their religion and accord them the same respect as they do to Brahmins, the upper caste priest community.

“The problem is that Dalits are not defined as Hindus. That’s why you see many of them converting to Buddhism and Christianity. With the advent of Hindu nationalism, the Dalits have found themselves further marginalised from the mainstream,” the veteran academic told Sputnik.

© AP Photo / Rajesh Kumar Singh
Indian City of Ayodhya Eyes Guinness World Record on First Diwali After Court Verdict - Photos
He, however, said that northern Uttar Pradesh (one of the country's biggest states with a population of 237 million people), remains among a few exceptions, where a large section of Dalits still consider themselves as Hindus.

“Once you start defining nationalism in the name of religion, the Dalits are by default marginalised,” reckoned Ilaiah, referring to the ideology of Hindu nationalism that has been openly espoused by Prime Minister Narendra Modi and other BJP leaders.

The anti-caste activist further argued that he didn’t advocate the celebration of Diwali because it was a “celebration of violence”.

In large parts of southern India, Diwali is celebrated to mark the killing of Naraksura by Lord Krishna, another Hindu God mentioned in the epic Mahabharata. Ilaiah argues that Naraksura wasn’t a demon as portrayed by “upper-caste” Hindus in the southern states.