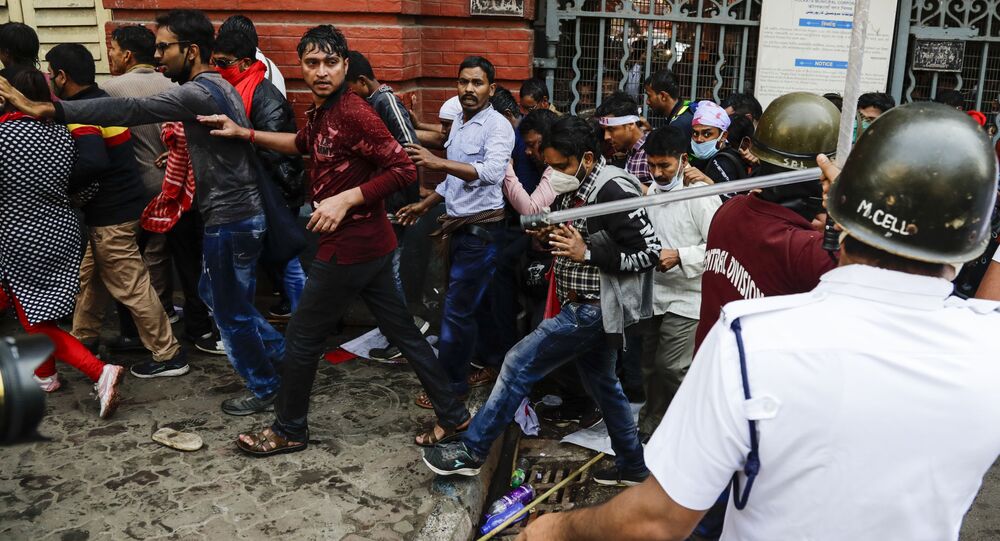 Elections in India’s eastern West Bengal state will be held from 27 March to 29 April across 101,916 polling stations in eight phases. The counting of votes will take place on May 2. The state has approximately 65 million voters.

Mamata Banerjee, state chief of West Bengal, alleged on Wednesday that she was attacked by four or five men who manhandled her during her election campaign in Nandigram.

Soon after the news broke on TV, mass protests and scuffles erupted across the state, which is notorious for political violence.

On 24 February, a Trinamool Congress (TMC) worker was shot dead and three others injured in a bomb attack in the Paschim Medinipur district. Last month, the federal Home Affairs Ministry said that in 2020, 663 cases of poll-related violence were recorded, in which 57 people were killed across the state.

According to National Crime Records Bureau (NCRB) data released in 2019, Bengal tops the country for political murders. During the 2019 parliamentary election, 12 political leaders were murdered in the state.

According to the NCRB, between 1999 and 2016, West Bengal witnessed an average of 20 political murders every year. 2009 was the deadliest year, when 50 politically-motivated murders were recorded.

TMC Chief Minister Mamata Banerjee has governed the state since 2011 after defeating the longest-serving democratically elected communist government in the world.

Amit Shah, Indian home affairs minister, and Jai Prakash Nadda, president of the BJP, plan to visit the home of 129 workers who have died over the past two years due to political violence.

Prime Minister Narendra Modi launched a veiled attack on the TMC last November, saying those who fail to challenge the BJP democratically are resorting to murdering its workers to achieve their goals. “Maut ka khel (killing game) cannot get you votes,” he said without naming the TMC.

The TMC has denied the allegations and accused the BJP of making baseless and irrelevant claims. "More than 1,000 of its workers have been victims of political violence since 1998," Banerjee said.

History Says it All

Explaining the history of violent clashes in the state, Sanjay Kala, said: “Bengal was the centre of attraction since independence. During the 1947 partition, when the British finally left, the subcontinent was partitioned into the two separate states of India and Pakistan, at least ten thousand people were killed.”

However, political violence in independent India made headlines again in the 1970s when West Bengal was governed by left-leaning parties.

On March 17, 1970, a day after the United Front government was toppled, left party leaders, who later occupied ministerial berths, murdered two Congress loyalists in front of their mother, who was allegedly forced to eat rice soaked in their blood.

The Naxalite movement (an armed peasant revolt in the Naxalbari district of West Bengal) was also on the rise in the state at the time.

"There were many reasons behind the rise of Naxalism which include food shortage, growing unemployment and changing political scenario in the state,” Priyadarshi, a scholar from Jawahar Lal Nehru University (JNU), told Sputnik.

In 1997, former state chief Buddhadeb Bhattacharjee admitted that there were 28,000 political murders committed in the state between 1977 and 1996.

For the past 20 years, West Bengal has witnessed violence on a regular basis, especially when the incumbent government senses a threat from any rising opposition party.

“It is different from the class-based Naxalite upheaval in the 1960-70 period. It is also different from the caste-based violence that can be seen in parts of North India,” wrote historian Sumanta Banerjee in his article, ‘West Bengal: Violence without ideology.’

When the TMC – led by Mamata Banerjee – started seriously challenging the left-leaning government in the early 2000s, violence broke out in southern parts of West Bengal.

“What turned the nail on the coffin for the left government, when police opened fire 14 villagers of Nandigram, East Midnapore in 2008. The government wanted to set up a chemical factory in the area, the farmers resisted. More than 50 people died over a span of two years (2007-08), the government left the project,” Banerjee wrote.

Many who lost their lives in Nandigram were considered workers of the then opposition TMC and governing communist parties. The 2011 state assembly brought the TMC to power and another cycle of political violence began.

Yet another cycle of political violence erupted in 2018 when the TMC was challenged by the BJP.

During the 2018 panchayat election (village body election), the ruling government won dozens of seats, which remained uncontested allegedly due to fear among opposition parties' workers.

“Election is not a peaceful affair in West Bengal. Every election in the state is marked by a higher level of violence from the past. TMC won over 34 per cent of the seats without contest in the 2018 local body poll. This is what you call poll-rigging,” Kala explained.

However, TMC leader and parliamentarian Derek O’Brian responded to the critics in 2018 while presenting historical records of violence in the state.

The number of violent incidents grew further with each passing year since then as the BJP performed better than expected in the 2019 parliamentary election.

In December 2020, Mamata's close aide Suvendu Adhikari joined the BJP. Earlier in 2017, TMC heavyweight Mukul Roy also joined. Over the past year, close to 40 leaders of the governing TMC have joined the BJP – the rising force of the state – which intensified the violence in rural belts of West Bengal.