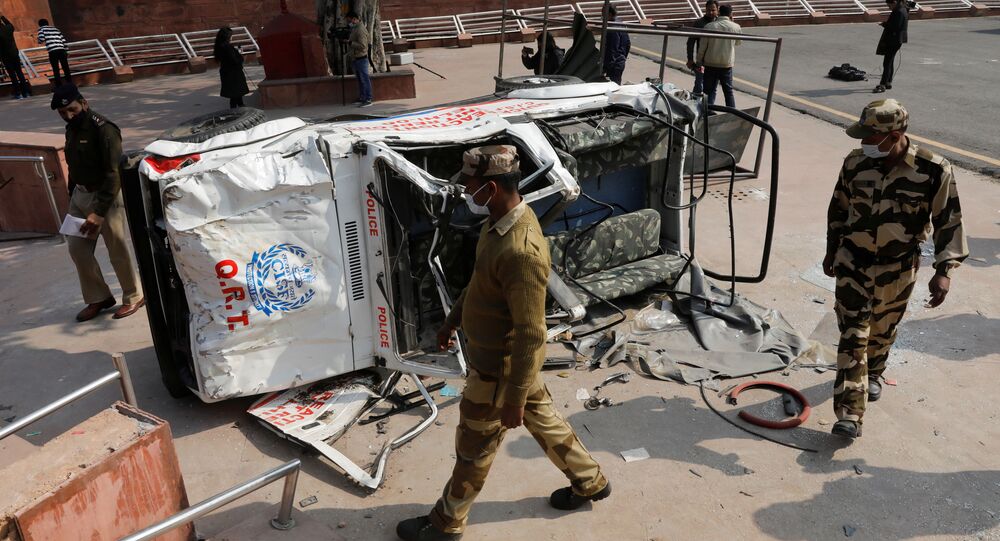 Punjabi singer-actor Deep Sidhu, who has been protesting alongside farmers since day one at Delhi's borders, demanding a repeal of the new farm laws, has gone missing after he was accused by farmer leaders of "instigating" and "misguiding" protesters carrying out a tractor parade on Tuesday amid the 72nd Republic Day celebrations.

Punjabi singer-actor Deep Sidhu, who has been a part of the protest from the start, has been accused by farmer leaders of "instigating" violence and "misguiding" them and is being called a "traitor" for allegedly breaking the protocol of the peaceful tractor rally.

To clarify his stance, Sidhu took to social media and denied all the allegations in a video message released from an undisclosed location.

Making shocking revelations about the whole incident, Sidhu said, “I’m not a gaddar (traitor). I didn’t lead people to the Red Fort. This was the decision of the public who had come all the way from Punjab to protest. Nobody was leading them”.

“I also tried to convince the farmers' leaders about the anger of the youth for the parade from Punjab that we should listen to them because our farmers' movement is going on with their support but they ignored my words”, Sidhu said.

Sidhu accused the farmer leaders of "back-tracking" and has also threatened to disclose their hidden agenda if they try to shift the blame onto him.

Sidhu said in the Punjabi language, “The farmer leaders have labelled me a gaddar (traitor). If I open my mouth, the farmer leaders would be exposed and they wouldn’t even find a way to escape from Delhi”.

Meanwhile, the problems for Sidhu seem to be getting bigger, as Delhi Police on Wednesday booked him for instigating clashes at the farmers' tractor parade at the iconic Red Fort on 26 January.

The actor was last captured on camera fleeing the scene on a motorcycle after being chased away by a group of farmers from the Red Fort on the day of the violence.

In a Facebook Live video, he added that he was “very much near Singhu border and those who chased him are loyalists of the farmer leaders”.

PROFANITY ALERT:
This is how Deep Sidhu ran away from Red Fort after creating violence. A bike was on standby for him, while the farmers chased him.
All of this was planned at the behest of BJP.
pic.twitter.com/2xxvveF6u0

In a previous Facebook Live video, he also clarified that hoisting the religious "Nishan Sahib" flag on top of the Red Fort was not a planned move. "We only hoisted the Nishan Sahib at the Red Fort while exercising our democratic right to protest, the Indian flag was not removed".

Putting all the blame on Sidhu and calling the violence politically motivated, Bharatiya Kisan Union (BKU) spokesperson Rakesh Tikait, who was also booked in the farmers' violence by Delhi Police, said: "This is not a movement of Sikhs, but farmers. For the last two months, a conspiracy is going on against a particular community. Those who created violence and unfurled flags at the Red Fort will have to pay for their deeds".

Deep Sidhu is not a Sikh, he is a worker of the BJP. There is a picture of him with the PM. This is a movement of farmers & will remain so. Some people will have to leave this place immediately- those who broke barricading will never be a part of the movement: Rakesh Tikait, BKU pic.twitter.com/7cXlKZ6gNe

Farmer leaders also accused Sidhu of having connections with BJP politicians, as pictures of him with PM Narender Modi and actor-politician Sunny Deol during the 2019 elections surfaced on the Internet.

Thousands of protesting farmers entered Delhi during the 72nd Republic Day celebrations on Tuesday morning as part of a tractor rally. Some of them invaded the iconic Red Fort, leading to violent clashes between the police and farmers.

Delhi Police issued notices to at least 20 farmer leaders including Yogendra Yadav, Baldev Singh Sirsa, and Balbir S. Rajewal for breaching the agreement with police regarding the tractor rally. More than 300 police suffered injuries and one tractor-riding protester died.