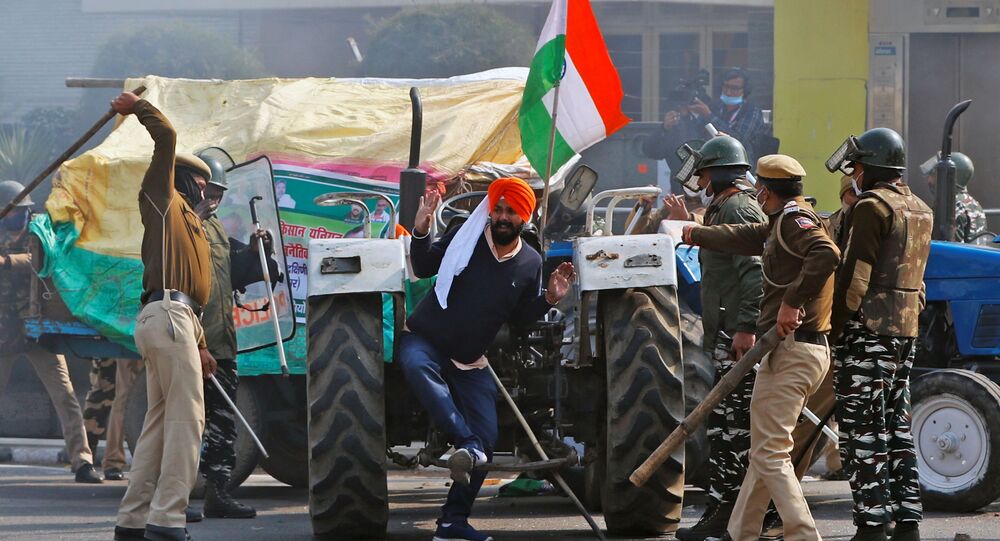 As part of their Tractor Protest Rally, thousands of farmers entered Delhi on Tuesday morning riding SUVs, cars, and wheeled farm equipment. A faction of the rally soon invaded Delhi's iconic Red Fort, leading to violent clashes with police as the farmers seek the repeal of several farm laws recently decreed by the central government.

While farm leaders in the state of Haryana and Punjab distance themselves from the events at Delhi’s iconic Red Fort on India’s 72nd Republic Day, saying agitation against the new farm laws has nothing to do with violence, social media continues to buzz over the possible cause of clashes in the centre of the Indian capital.

#PeacefulProtestsContinue remained trending as the number one issue on Twitter since Wednesday morning, with 118,000 tweets until afternoon.

On Tuesday, a section of the protesting farmers entered the historic Red Fort in New Delhi and hoisted their religious flag on the main flagpole, where the Prime Minister hoists the national flag on Independence Day (15 August).

The invasion in the highly-fortified Red Fort, despite the city being on high alert, led to police using force against the protesters. Delhi police later claimed that over 300 police personnel suffered injuries, without detailing casualties suffered by the marchers.

A section of netizens is pouring out its support to farmers on Twitter.

There were around 3-4 water cannon vehicles at Delhi-Karnal stoppage, none were used, WHY?
Police parked DTDC buses as barricades, WHY?
Hundreds of police personnel allowed protesters to reach & go inside Red Fort, WHY?

This ‘WHY’ has all the answers.#PeacefulProtestContinues

Godi Media will never show you this

Another set of netizens is now criticising the ongoing protests after witnessing violence and the hoisting of the marchers flag over the Red Fort. By afternoon #TraitorNotTractor started trending number one issue, but with only some 40,000 tweets.

The kind of violence, anarchy and insult to the nation & it's sovereignty in the name of Tractor Parade is undemocratic and is the culmination of anarchy. #TraitorNotTractor #नक्सली_खालिस्तानी_षड़यन्त्र pic.twitter.com/lj8hZ7o0Qr

Farmers from Punjab and Haryana who have been camping on the border of Delhi for the past two months have disassociated themselves from Tuesday's violence.

S.S. Pandher, Kisan Mazdoor Sangharsh Committee (a farmers’ body) said to Sputnik that, "Some miscreants joined the protest of farmers' movement. We did not plan to unfurl the flags at Red Fort, this was not our programme."

Gurmukh Singh, a farmer from Punjab state who is camping at Delhi’s Singhu border told Sputnik, “Majority of the farmers protested peacefully and those inside Red Fort were not part of us. It is a conspiracy to malign us. But we are not letting it affect our morale."

"The farmers crossed into Delhi at 10 a.m. as approved by the Delhi Police. The miscreants who went to Red Fort crossed over at 8 am. Who were they and who allowed them in? We don't know," he claimed.

Some farm leaders stated that their scheduled march to Indian Parliament on Budget Day (1 February) will be carried out as planned. In a press statement, the farmer leaders said that the "Union Government has been severely shaken by this peasant agitation and therefore, a dirty conspiracy was hatched to malign their image".

"The farmers' organisations resolve to continue this agitation and harshly condemned the government and its administration, anti-social elements, who tried to damage the peaceful farmers struggle," said the statement.

The "Kisan Mazdoor Sangharsh Committee and others remain against the peaceful struggle of other farmer organizations who set up their own separate protest site after 15 days of beginning of this Farmers' agitation. They were not part of the organisations which jointly undertook the struggle."