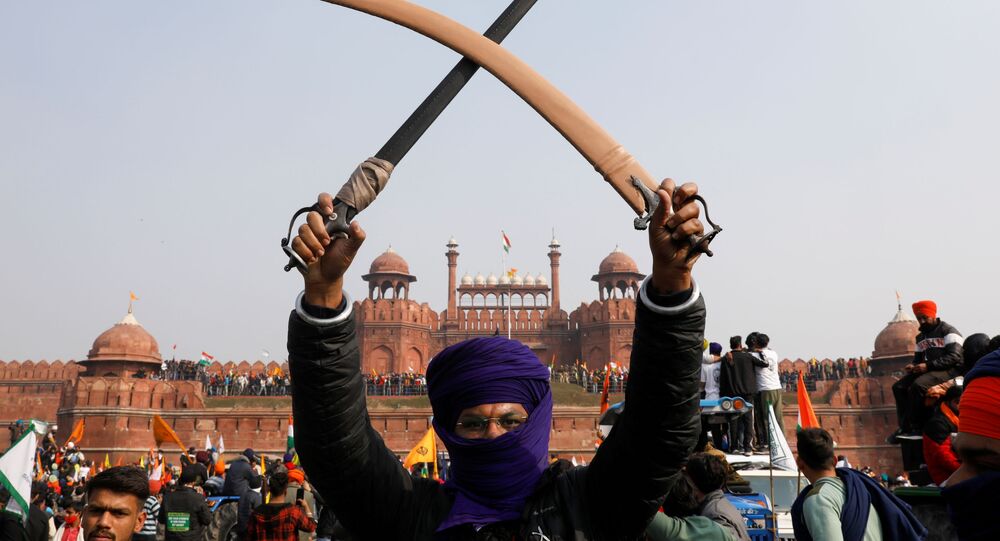 The date 26 January is of national significance in India, as it marks the anniversary of when the country finally enforced its own constitution in 1950 after winning back independence from the British Raj in 1947. The 72nd Republic Day celebrations in India this year were affected by the COVID-situation. However, riots broke out in Delhi.

Thousands of farmers, who have been protesting against three newly passed farm laws since November 2020, crossed the borders to enter the national capital on Tuesday. The Delhi Police, which had allowed the farmers to carry out their proposed tractor rally between 12:00 pm to 5:00 pm (IST) in the city, ended up using tear gas and batons against the farmers to stop them from violating the agreed upon rules in the morning.

The time and the routes for the tractor rally were finalised after several rounds of meetings. But farmers drove tractors off the routes and before the fixed time, leading to vandalism in which many police personnel were injured: Delhi Police Commissioner SN Shrivastava to ANI pic.twitter.com/Db8zTayCCS

​How the Riots Transpired Over the Day in Delhi

© REUTERS / DANISH SIDDIQUI
Live Updates: Farmers' Rallies in New Delhi Turn Violent During India's Republic Day Celebrations
The situation began to worsen in Delhi when agitating farmers pushed away barricades and entered the city while the annual military parade was being carried out in the capital’s iconic Rajpath area – which stretches from the Presidential Residence to the historic India Gate. Every year, Delhi observes a high alert on this day.

Soon, visuals from Delhi's borders began surfacing on social media, showing masses of people running, some on horseback, tussling with police forces and trying to enter the capital.

​By noon, reports of violent clashes between cops and protesters began pouring in from different areas of Delhi. Nangloi Chowk, Akshardham, and the ITO – where the Delhi Police Headquarter is located – emerged as the hotspots of riots in the city.

👉Unbelievable scenes here in Delhi just a KM away from Akshardham

👉One of him hit this tractor & then this happened

​Especially in the ITO area, police officials were caught on camera throwing tear gas shells at hundreds of farmers, who were wielding sticks and clubs. The area, located just a few kilometres away from parliament, was chosen by the farmers as a route towards Rajpath.

Protesters attack Delhi Police personnel, vandalize buses and break barricades at ITO, New Delhi. Protest loses all meaning once you resort to violence and rioting. Masses won’t support any cause where protest leads to physical attack on police personnel. pic.twitter.com/3BZz1T9QMG

​A person was reported dead in Delhi’s DDU Marg area after a tractor overturned during the violence.

​Just as the situation became even tenser, shocking news of protesters invading Delhi’s symbolic Red Fort to hoist another individual “Kesari” (yellowish coloured) flag alongside the national Tricolour began breaking on the Internet. The flag that the protesters hoisted at the Red Fort is called the “Nishan Sahib Flag” and is considered sacred in Sikhism.

Protesters tie ropes to the gate to bring it down. pic.twitter.com/rT7aHgO1t6

Farmers have reached the iconic Red Fort. They can been seen playing loud music and dancing.#HistoricTractorMarch#FarmersProstests#TractorRally @SputnikInt pic.twitter.com/KhdzrDDCCG

​Several farmer leaders have, however, said that some notorious miscreants, probably related to “political groups”, had infiltrated the gatherings of protesters and the triggered violence.

"We are conducting the rally peacefully. We know that some political elements want to disrupt the rally": Rakesh Tikait, Farmer Leader #FarmersProtest pic.twitter.com/8WtLxeISEo

Taking into consideration Delhi’s tense situation, federal Home Minister Amit Shah called for an emergency meeting with counterparts from the governing Bharatiya Janata Party (BJP) to discuss the next line of action.

In a bid to bring the protesters under control before the situation escalates, the Home Ministry has ordered the deployment of over 1,500 more troops across the capital, including personnel from paramilitary forces. Delhi was otherwise being guarded by over 7,000 troops, but the protesters outnumbered them by thousands.

In addition, netizens also discussed the Internet and telecom services being disrupted or cut in several parts of Delhi.

Order given to all telcos in Delhi-NCR to switch off internet in border areas and give only 2G in other parts. Shutdown happening in phases. #InternetShutdown

Internet services suspended in some parts of NCR @CNNnews18 pic.twitter.com/3xnyIlOMkO

Internet services suspended in many parts of Delhi.

​The agitating farmers, who demand that three farm laws passed during the monsoon session are revoked by the government, are firm in their stance.

The three laws that sparked the controversy are the Farmers’ Produce Trade and Commerce (Promotion and Facilitation) Act, 2020, the Farmers (Empowerment and Protection) Agreement on Price Assurance and Farm Services Act, 2020, and the Essential Commodities (Amendment) Act 2020.

The farmers fear that with these new laws, the BJP government is backing out from its role as a price guarantor for their produce while leaving their earnings to be influenced by market forces.

The government, led by Prime Minister Narendra Modi, has, however, called the laws “progressive”.

After over 10 rounds of discussions between the farmers and government officials, no solution has been reached as of now.