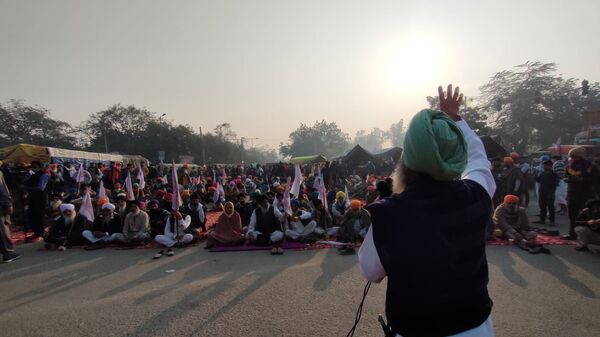 Advitya Bahl
All materialsWrite to the author
The Narendra Modi government has been facing protests and criticism from opposition parties since passing new farm laws in September. In the last two months, agitated farmers have taken to streets, sometimes blocking railway tracks, to express their anger, as they think the new laws empower corporations at their expense by driving prices down.

“When you are in pain, you visit a doctor”, says Jaswinder Singh, a 41-year-old farmer from India’s agricultural state of Punjab who has reached the Delhi-Singhu border along with thousands of others protesting against the new farm laws.

“Thousands of our brothers and sisters (farmers from Haryana and Punjab states) have left their fields, families and come here. We all are in pain, our families, livelihoods will be in trouble. The new laws will reduce their earnings and make large retailers more powerful. We are here to make our demands met and will not leave from here till we are heard and our demands accepted”, Jaswinder adds.

Thousands of farmers, braving the water cannons, tear gas, and barricades of the Haryana and Delhi Police have reached the borders of Delhi.

Tuesday marks the sixth day of farmer protests near the Indian capital against the laws passed by parliament during its Monsoon Session in September.

“We are ready to do what it takes to see the end of the three farm laws passed by the Modi government. The new laws allow businesses to freely trade farm produce outside the so-called government-controlled market system while it also permits private traders to stockpile large quantities of essential commodities for future sales. They lay down new rules for contract farming”, Jaswinder emphasises. 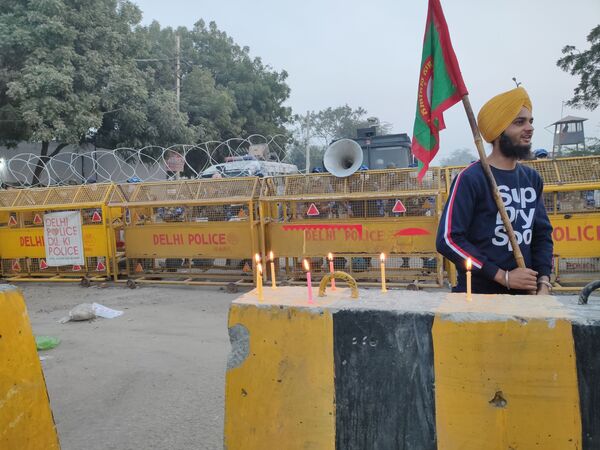 Several farmer associations believe the new laws will leave them at the mercy of private buyers, as they believe the new rules pave the way for the dismantling of the minimum support price system (MSP).

Representatives of the protesting farmers told Sputnik that they want the prime minister to listen to their "Mann ki Baat", referring to a bimonthly public address on radio in which Modi addresses key issues.

What Do the Protesting Farmers Demand?

Apart from the rollback of the agricultural reform laws, the farmers want a written assurance in the form of a bill that the minimum support price (MSP) and conventional food grain procurement system for the central pool will continue.

Talking to Sputnik, Satyawan, the national president of All India Kisan Khet Majdoor Sangathan (a farming labourers body), said that they also want the Modi government to drop the Electricity Amendment Act.

“If this becomes a law, we will lose the free power supply facility as this amendment will allow private companies to rule and discontinue free power to farmers in Punjab”, he says.

He further mentions that one of their demands also includes a provision under which farmers responsible for burning crop residue face five years imprisonment, besides a fine of up to INR 10 million ($135,851).

“We also demand the release of farmers arrested on charges of burning paddy stubble in the state”, Satyawan adds.

With strong assumptions that the talks between the government and farmers might not reach a common ground anytime soon, the farmers have been mentally prepared for the long battle.

Many protesters have cushioned their trolleys with mattresses. They claim that their aim is to stay strong even during the cold nights. Over the last few days the temperature at night has fallen to 7 degrees Celsius.

Help is pouring in from all around the country, including the film industry, politicians, and businessmen.

“Our tractors are fitted with loudspeakers and the energy and love we have got from the people is immense. Several doctors have also come in and laid tents, while keeping a check on the measures to be taken like wearing a mask or sanitising”, Gurpal Kaur, a female protester, says. 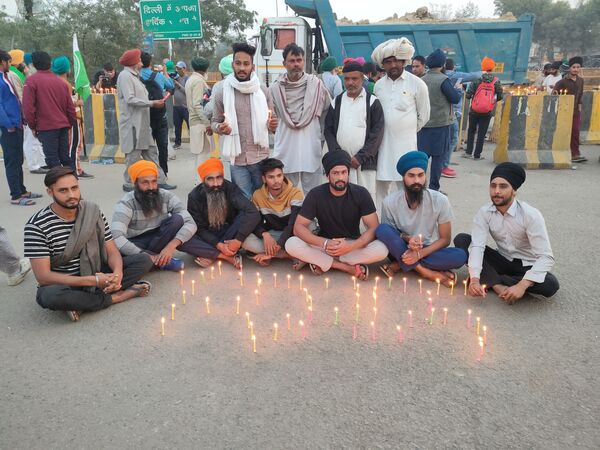 She goes on to say that food and the health of everyone is being taken care of properly.

More than 30-35 famer unions are present at the borders, while representatives said the Khaps – community organisations – of Haryana state have unanimously decided to support the farmer protests.

“Over the next couple of days, more people are expected to join and we are planning to enter Delhi and protest”, Guruteg Singh, a farmer from Haryana, says.

Hundreds of security personnel, meanwhile, continue to guard the borders leading to Delhi after the farmers threatened to seal five entrance roads leading to the Indian capital.

Equipped with extra forces and arms, the Delhi Police are making sure that no unlawful situation takes place.

On Monday evening, the Delhi Police filed a First Information Report (FIR) in connection with the violence that broke out during the protest by farmers at the Singhu border on 26-27 November.

The case has been registered under sections of rioting, unlawful assembly, destruction of public property, assaulting public servants, etc.

The commissioner of the Delhi Police also visited the protest site to check the law and order situation at the border and requested the farmers to move to an assigned place, as the highway leading to the capital city is causing traffic issues for the general public.

Meanwhile, addressing a public meeting on Monday, Prime Minister Modi clarified that farmers were being empowered by these new options for a bigger market. He also said the new farm laws have given them legal protection.

“The farmers are being misled on these historic agriculture reform laws by the same people who for decades have misled them”, he said.

The government has maintained that the new laws will bring farmers better opportunities and usher in new technologies in agriculture.