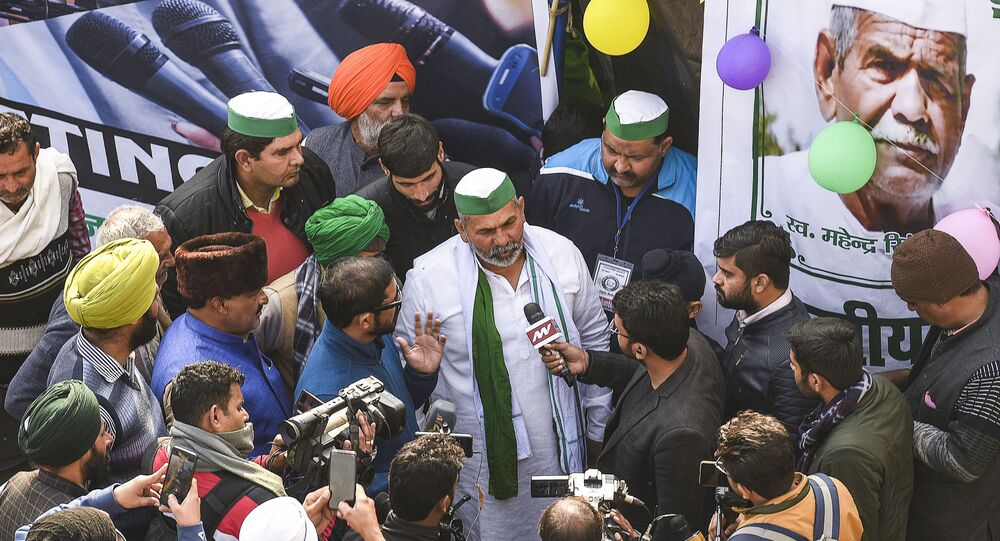 On Tuesday, India's Supreme Court suspended the implementation of new farm laws passed by parliament in September. The court also formed a four-member committee to break the 49-day deadlock as thousands of farmers are adamant in their demands to have the laws withdrawn.

Over the last 49 days, roads and highways leading to the Indian capital New Delhi have been blocked by thousands of farmers, demanding a complete rollback of three laws referred to as "historic" by the Narendra Modi government.

The government and farmer unions have had eight rounds of talks but the protests on Delhi's borders show no signs of abating, with agitation sites on the outskirts of the Indian capital turning into semi-permanent camps since the end of November.

Sputnik has spoken with one of the most promiment leaders of the protest movement and the spokesperson of the Bharatiya Kisan Union, Rakesh Tikait, who has been at the forefront of various farmers' protests for years. He is also the son of a prominent farmer leader who gave his entire life to fighting for farmers' rights, the late Mahendra Singh Tikait.

Sputnik: How do you assess the Supreme Court's decision to suspend the laws?

Rakesh Tikait: We welcome the decision of suspending the implementation of the laws taken by the Supreme Court, but are unhappy with the committee it has formed. The members of the committee have been supportive of an open market system or law. Actually, it was Ashok Gulati, under whose chairmanship a committee had recommended to bring these laws to the government in the past. All of us are disappointed with this decision.

Sputnik: In your view, will the forming of the committee lead to any solution or end this protest?

Rakesh Tikait: Firstly, we are not sure why the committee is being formed when we are directly in contact with government officials and are holding regular meetings. Parliamentarians should be made the negotiators or mediators. Secondly, over the years we have understood that the government forms committees to delay, divert and deviate the issues, misguide or mislead the people. We kept saying through the media that we do not want a panel or committee to resolve the deadlock.

Sputnik: What are your demands and where do you plan to take things from here?

Rakesh Tikait: The battle isn't won yet. Our demand was to withdraw the laws and we have stayed firm on it since day one of the protest. We will continue to protest in this manner until the government rolls back these laws and provides us with legal guarantees on minimum support prices.

Sputnik: Is the tractor rally planned for Republic Day still on?

Rakesh Tikait: Yes, the tractor rally will go ahead as per the plan on 26 January (India's Republic Day). Our plan is not to disrupt the Republic Day celebrations as labelled by the Delhi Police before the court. We want to ensure our voices are heard. The police said that the rally will malign the nation globally but they should understand our pain and recall the deaths of over 70 farmers (protesters) who have died so far while fighting against the government. Doesn't that embarrass the government globally?

Sputnik: Farmers have blocked several highways and important roads affecting thousands of commuters on a daily basis. What if the government tries to vacate the roads forcefully?

Rakesh Tikait: If the government forcibly tries to disperse the farmers, it could trigger bloodshed resulting in the deaths of more than 10,000 persons. We would never want that to happen.