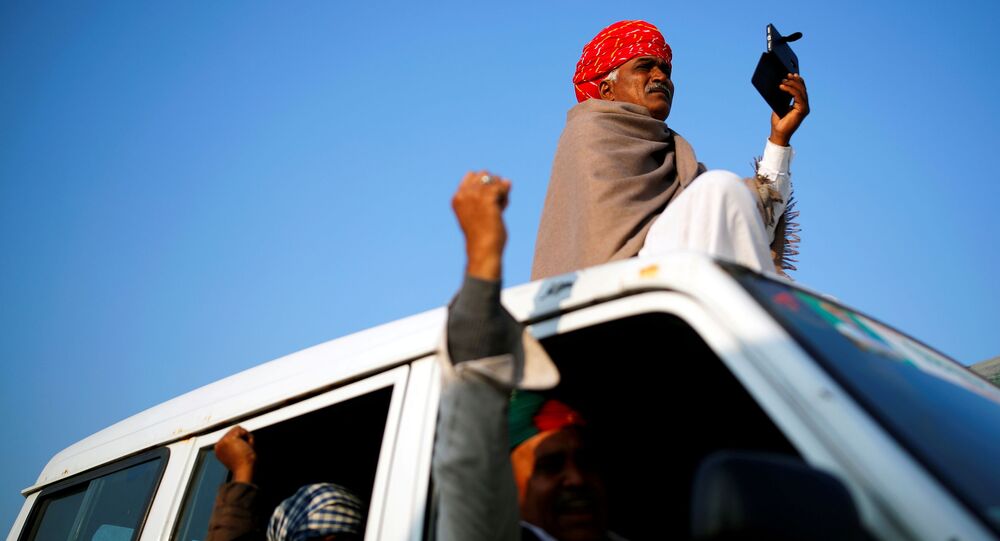 In a clear departure from their earlier stance, protesting farmers last week stated they were ready for talks to de-escalate the crisis if the Indian government offered concrete proposals to address their concerns.

Days after sending a proposal for talks to the Narendra Modi government, protesting farmers' unions have called for a nationwide agitation on New Year urging the public to take a pledge to support the farmers' struggle and demand complete rollback of the three recently passed farm laws.

"We have made it clear to the government that farmers are ready for talks but are waiting for them [the central government] to come to the table with an open mind. We have called for a nationwide protest on New Year's day and are requesting the general public to come in full support", Darshan Pal, a farmer leader, tells Sputnik.

Apart from nationwide protests, several agricultural bodies have also planned rallies in the Indian states of Bihar and Tamil Nadu on 29 December, and in Manipur and Hyderabad on 30 December.

© Sputnik
Protesting Farmers in India: 'Shame on PM Modi If He Still Can't See Our Plight'

"All our protest programmes will continue as scheduled. We are not going to back out, we will keep fighting and have got more support as farmers from Maharashtra joined the ongoing protests at the Haryana-Rajasthan border", Pal added.

Since 26 November, Indian farmers have blocked the roads in the states of Uttar Pradesh and Haryana leading to the capital New Delhi. They have been protesting against the Prime Minister Modi-led government's recently passed Farmers (Empowerment and Protection) Agreement of Price Assurance and Farm Services Act, 2020, Farmers Produce Trade and Commerce (Promotion and Facilitation) Act, 2020, and The Essential Commodities (Amendment) Act 2020.

According to the government, the laws allow farmers to sell their produce at places apart from their designated government-owned wholesale market. They also aim to allow contract farming under which they can enter into supply agreements with private firms for remunerative and pre-decided prices.

But the farmers believe the new laws will promote privatisation and help big firms like Reliance or big players like Mukesh Ambani, leaving them with nothing.

Over the last few weeks, the government and farmer leaders have been involved in several rounds of talks, however, the parties haven't been able to reach a compromise.