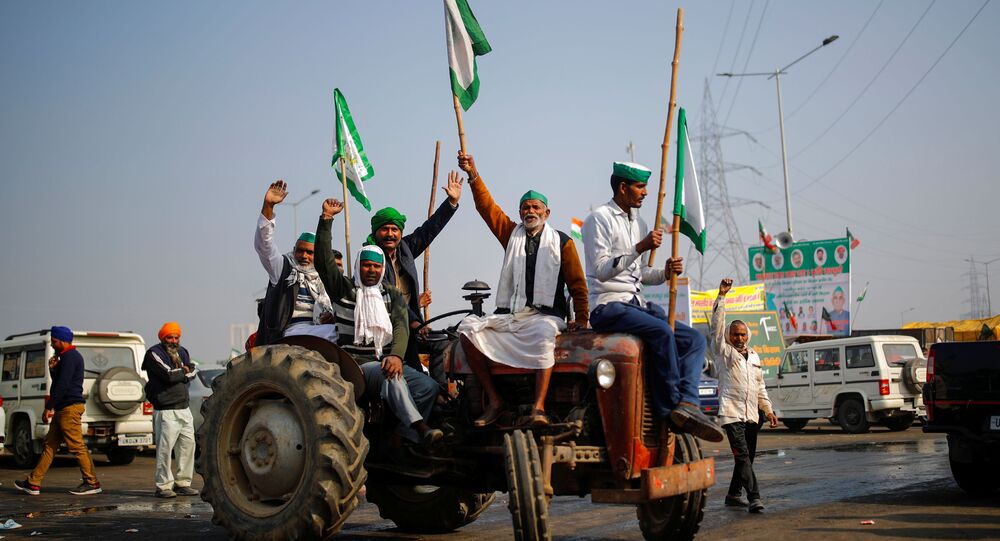 Opinions are divided on the Narendra Modi government's farm reform laws, Farmers Produce Trade and Commerce, 2020 and the Farmers Agreement on Price Assurance and Farm Services, as thousands of farmers continue to protest against the legislation on the outskirts of Delhi.

Former Deputy Chairman of Niti Aayog, an Indian government think tank, has slammed two global economists, who served as economic advisers to the Congress government, on the contentious issue of the farm reform laws.

It is because of these laws that protesting farmers are camping out on the borders of India's capital New Delhi.

© Sputnik
Protesting Farmers in India: 'Shame on PM Modi If He Still Can't See Our Plight'
Panagariya wrote in an article in The Times of India on Friday that both Rajan and Basu were in favour of farm reforms while they were serving a Congress government and have changed their stand now that the Narendra Modi government has brought about the reforms.

Panagariya also said both had batted for farm reforms during their tenure as CEA to the Indian Finance Ministry.

Panagariya quoted the economic survey tabled by Basu in 2012 where he proposed liberalisation of agriculture marketing.

"The Economic Survey 2011 – 2012, which the then CEA Kaushik Basu authored states that any farmer who gets better prices and term outside the Agriculture Produce Marketing Committee, or at its farm gate should be allowed to do so. It adds, considering significant investment gaps in post-harvest infrastructure of agricultural produce, organised trade in agriculture should be encouraged", Panagariya said.

"Successor CEA Raghuram Rajan made the same recommendation in the Economic Survey of 2012 –13", Panagariya wrote, adding that both CEAs had thus endorsed the entry of not just Indian private companies but also foreign multi-brand retailers in agricultural marketing. Yet both have now argued that the new laws open the door of exploitation of farmers by private companies, he added.

Rajan and Basu have both expressed their views against the farm reform laws brought about by the Modi government. The laws in question are the Farmers Produce Trade and Commerce, 2020 and the Farmers Agreement on Price Assurance and Farm Services, ratified by the Indian parliament in September.

© REUTERS / DANISH SIDDIQUI
India's Top Court to Farmers Protesting at Delhi’s Borders: 'You Can't Block a City Like This'
The Farmers Produce Trade and Commerce Law allows farmers to sell their produce at places apart from their designated government-run agriculture market.

The protesting farm organisations fear that this law will kill the system of state procurement at a Minimum Support Price (MSP) by the government. MSP is the price at which the government procures farm produce from the farmers at the end of the harvest season. Under the MSP system, farmers get an assured offtake of farm produce at a fixed government price from their designated state run APMC market.

Rajan has criticised the farm reform laws from various platforms ever since the farmer protests gained momentum. Basu, meanwhile, has maintained that the farm laws will impact small and marginal farmers.