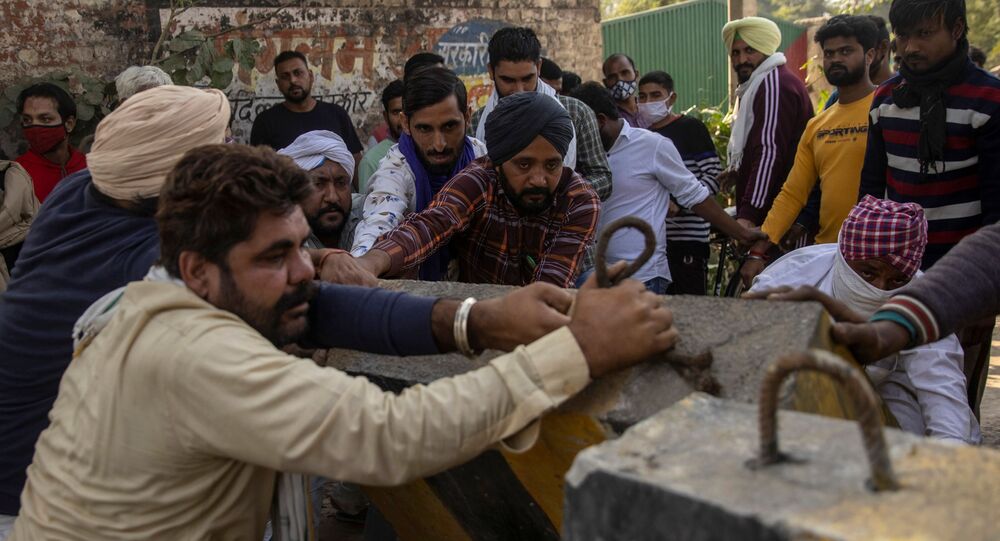 Over 30 farm organisations have been protesting at the borders of the Indian capital for the last 22 days against farm laws brought about by the Modi government. The laws – Farmers Produce Trade and Commerce, 2020 and the Farmers Agreement on Price Assurance and Farm Services – were ratified by the Indian parliament in September.

India's apex court on Thursday told the farmers blocking entry points to Delhi in protest against the farm laws that they cannot create such obstacles in the city and instigate violence, even while upholding their right to protest.

The Supreme Court of India also proposed an independent committee headed by agriculture economist P. Sainath to look into the concerns of the farmers against the laws.

Hearing a petition seeking the court's intervention in relocating the protesting farmers from various entry points of the national capital, the Supreme Court of India observed, "We recognise the fundamental right to protest against the laws and no question to curtail it. The only thing we can look into is that it should not cause damage to someone's life".

Hearing the matter, Chief Justice of India (CJI) S.A. Bobde said, "A protest is constitutional till it does not destroy property or endanger life. Centre and farmers have to talk; We are thinking of an impartial and independent committee before whom both parties can give its side of story".

"We are also Indian, we're familiar with the plight of farmers and are sympathetic to their cause. You (farmers) have to only alter the way the protest is going. We will ensure you can plead your case and thus we are thinking of forming a committee", the CJI said.

In its observation to the central government, the Supreme Court asked whether the legislation can be put on hold and sought assurance that the government will not take any executive action on implementation until the court hears the matter.

The farmers, predominantly from the north Indian states of Punjab, Haryana, and others, are utterly opposed to the agriculture reform bills brought in by the Narendra Modi government as they feel that the principles of the free market economy in the sector will hurt them.

The Farmers Produce Trade and Commerce Law allows farmers to sell their produce at places apart from their designated government-run agriculture market.

The protesting farm organisations fear that this law will kill the system of state procurement at a Minimum Support Price (MSP) by the government. The MSP system actually allows an assured offtake of the farm produce at the government rate.

The farmers are demanding a repeal of the laws.

Meanwhile, Delhi's governing Aam Aadmi Party (AAP) has been vocal in supporting the protests ever since they began along the city's borders in the last week of November. Delhi state chief Arvind Kejriwal recently said that the contentious farm reform laws were not just against the interest of farmers, but also against those of common people. In a tweet, Kejriwal even said the laws will encourage stockists.