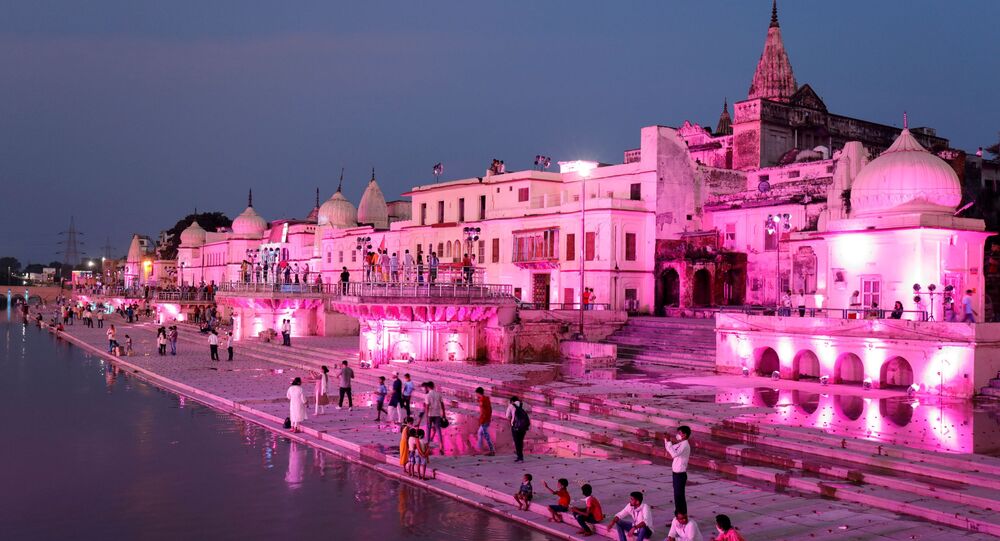 New Delhi (Sputnik): Lamps are lit and the holy city of Ayodhya is decked up for the foundation laying ceremony of the Ram Temple. The apex court of India put an end to the centuries-old dispute between Hindus and Muslims by ordering the construction of a temple at the site last November.

For a religious country like India, the foundation-laying ceremony of the Ram Temple is of immense significance. The fervour has not just gripped Ayodhya, where the temple is supposed to be built, but the entire country.

Devotional songs are being sung, people are dressing their kids as Hindu God Ram, his brother Lakshmana, and Ram's wife Sita, the revered trio in Hindu mythology. Dhols (Indian instrument) are beating across the country and people are sharing sweets, dancing, and looking forward to Prime Minister Narendra Modi's visit to lay the foundation stone.

. @Mamataofficial Didi #JaiShriRam to You, Celebration for Ram Mandir. pic.twitter.com/cjNLmLVjO4

​The zeal and excitement is not only limited to India, but has travelled to the United States. Members of the Indian community poured into the streets of Washington DC to celebrate the foundation laying ceremony for the Ram Temple.

In the pictures, they can be seen dressed in saffron clothes, a colour considered to be sacred in India, and held flags to celebrate the moment.

As Ayodhya awaits the foundation stone laying of Ram temple, Indian-Americans are doing their bit of making sure that these celebrations echo in the US. https://t.co/lndsj7KrqK pic.twitter.com/oeZJHSg0dc

​Twitterati also shared the pictures and videos of beautiful Ayodhya twinkling last night. The reflection of the city in the Ganges was a sight to behold. A group of young people also participated in paying a musical tribute to Hindu God Ram.

​Meanwhile, Prime Minister Modi has left for Ayodhya. He will fly in a helicopter from Lucknow to Ayodhya. Before taking part in the ceremony, Modi will perform a "pooja" (devotional activity) at the Hanumangarhi Temple in the holy city.